After a year of hardship in Haiti, the response from Haitian Montrealers has been disappointing, says one activist 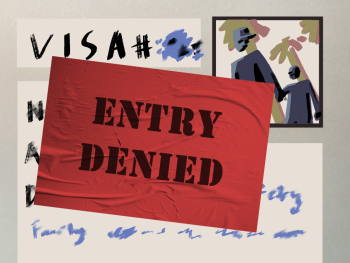 Activists are calling on Montreal’s Haitian community and the Canadian government to take greater action to support the small nation.

From the crisis that followed the assassination of former Haitian then-president Jovenel Moïse in July, to a massive earthquake on Aug.14 that saw a wave of refugees flee to the U.S. and Mexico border seeking safety, it has been a devastating year for Haiti.

Many of the migrants from Haiti and many South American countries were living in makeshift camps near the Del Río-Ciudad Acuña International Bridge in Del Rio, Texas. With little access to food or water on the American side, asylum seekers were forced to travel to Mexico in order to obtain supplies. It was on their way back to the camp where these people encountered the U.S. border patrol.

Images of border patrol agents on horses pushing back Haitian refugees have since gone viral.

Frantz André, a Haitian activist in Montreal who has long advocated for the rights of asylum seekers, said that “The image that came to mind was that we were back to slavery times, with slaves running away from the cotton plantation.” André is a spokesperson for Solidarité Québec-Haïti, and has been a member of the Action Committee for People Without Status (CAPSS). He was nominated by Gala Dynastie for activist of the year and has received the medal of the National Assembly of Quebec.

Montreal is a city with a large Haitian community. Haiti is a former French colony with a large number of French speakers, and this connection is what makes Montreal a popular location for migrants and refugees. Now some Haitian support groups and activists, like André, are condemning the actions of the U.S. government, and are calling on greater action here in Canada.

The reason for the sudden influx of asylum seekers at the U.S. border was the decision to renew a Temporary Protected Status (TPS) for 18 months by the Biden Administration. Many Haitians thought if they arrived in the States, they would be covered by the TPS. But this was not the case, as the TPS only applied to Haitians already residing in the U.S.

Many of the Haitian migrants who arrived at the border were already living in other South American countries and decided to make the journey to the U.S.

“Many decided, ‘I do not have a good life in Brazil, or Chile or whatever, I’m going to try to get in.’ Because some people do [get into the U.S.] and some people don’t,” said André.

“But when they arrived, most of them didn’t get in and thousands of them got deported to Haiti, even though some of them do not know it. Some of the kids were born in Brazil or other countries in South America.”

Solidarité Québec-Haïti is one such group that has been fighting against the mistreatment of Haitian migrants. The organization hosted a protest in front of the U.S. consulate in Montreal on Sept. 25. According to an article by the CBC news, only a few dozen people attended.

To activists like André, it’s been a disappointing reaction.

“To be honest, I’ve done two protests in the past two or three weeks and we didn’t get the response that you would have expected,” he said.

Haitian people began immigrating to Montreal in the 1960s André himself arrived in 1965 and even though their numbers were smaller at that time André says “There was greater solidarity.”

André says that many Canadian-Haitian leaders have not been taking a strong enough stand.

“We don’t get much from Frantz Benjamin, Emmanuel Dubourg, Nadine Girault, Dominique Anglade and other community leaders,” said André.

Frantz Benjamin, Nadine Girault, and Dominique Anglade are all members of the National Assembly of Quebec, while Emmanual Dubourg is a member of Parliament representing Bourassa. The Concordian has reached out to these community figures, but have not yet received a comment.

In a response made to The Concordian by Peter Liang, a communications advisor with Immigration, Refugees and Citizenship Canada, it was stated that “Canada has a deep and long-standing commitment to Haiti, and we want to continue to strengthen our efforts to improve the lives of the Haitian people. Canada, along with other key players in the international community in Haiti has been engaging directly with the interim government and other actors, to ensure peace and stability and encourage an inclusive dialogue with all political parties and all sectors of society.”

“When I do protests they’re not there,” said André. “Those Haitians that are in politics should be talking about what’s happening and asking the Canadian government to take a strong stand, denouncing and telling the States that ‘What you’re doing is not right. We in Canada are with Haitians and what you are doing is wrong.’ We don’t hear that from Trudeau or any of my brothers and sisters who are in politics.”