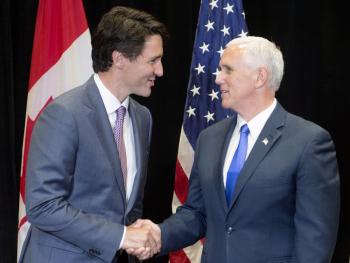 The Lima group will meet in Canada on February 4 to address the Venezuela crisis. For those of you who doesn’t even know who the Lima Group is, don’t worry; neither did we, many of us who are in the business of following this stuff. It is a multilateral body formed by Canada of Latin American countries that includes Argentina, Brazil, Canada, Chile, Colombia, Costa Rica, Guatemala, Honduras, Mexico, Panama, Paraguay, Peru, Guyana, and St. Lucia. The last two countries just joined.

The group was established in August of 2017 as an opposition to the OAS because they couldn’t get the decisions that they wanted to get out of the Organization of American States. So they formed a organization to address the Venezuela crisis. And in its mandate it states that it is established to bring about a peaceful resolution to the Venezuela crisis.

Joining me now to discuss Canada’s role in the Venezuela crisis today is Yves Engler and Paul Jay. Yves is a Canadian commentator and author of several books, and the most recent one is Left, Right: Marching to the Beat of Imperial Canada. And Paul Jay is the Senior Editor-In-Chief here at The Real News Network. And he was also the former executive producer of Counterspin, a current affairs debate show that took place in Canada on the Canadian Broadcasting Corporation for nearly ten years.

Defusing the crisis: A way forward for Venezuela (Video interview)

Venezuelan Sociologist Edgardo Lander and TRNN’s Greg Wilpert discuss how Venezuela got into its current international, economic, and political crisis and what it might take to get out of it.

Most Canadians think of their country as a force for good in the world, but recent efforts by Justin Trudeau’s government to overthrow Venezuela’s elected government have once again revealed the ugly truth about the Great White North. We are an important partner in imperialism, willing to interfere in the internal affairs of other countries, up to and including the use of military force, to benefit the perceived self-interest of our elites.

Over the past two years Canadian officials have campaigned aggressively against President Nicolás Maduro. Foreign Minister Chrystia Freeland has repeatedly criticized Caracas’ democratic legitimacy and human rights record. Recently she said, “the Maduro regime is now fully entrenched as a dictatorship” while in September Ottawa asked (with five South American nations) the International Criminal Court to investigate the Venezuelan government, which is the first time a government has been formally brought before the tribunal by another member.

Working hand-in-hand with the Trump administration, the Canadian government has been at the forefront of the attempt to artificially install Venezuela National Assembly president Juan Guaido as president. The Trudeau regime has the temerity of declaring Venezuela a dictatorship at the same time as it sells Saudi Arabia $15-billion in arms. Utilizing the mass media they are attempting to fool the population into supporting another right wing coup in Latin America. But increasingly people are seeing through the lies and hypocrisy.

For two decades US imperialism has been doing everything in its power to organize a coup against the democratic wishes of the people of Venezuela. The reason for this was the revolutionary process sparked off by the election of Hugo Chavez that redirected Venezuela’s oil wealth away from US oil corporations and a local oligarchy, and towards social programs, healthcare and education, for the benefit of Venezuela’s poor. A 2002 US-backed military coup was defeated by the movement of the masses, and in the following years there was an oil lockout, a recall referendum, and ongoing economic sabotage, but each of these were defeated. The present coup attempt is a continuation of this decades-long struggle to regain control of Venezuelan oil wealth for imperialist interests, and not due to any “humanitarian” concern for democracy by Canada and the USA.

As President Trump announces that the U.S. will recognize opposition leader Juan Guaidó as Venezuela’s new leader and sitting President Nicolás Maduro breaks off relations with the United States, we speak with a former U.N. independent expert who says the U.S. is staging an illegal coup in the country. Alfred de Zayas, who visited Venezuela as a U.N. representative in 2017, says, “The mainstream media has been complicit in this attempted coup. … This reminds us of the run-up to the Iraq invasion of 2003.” We also speak with Miguel Tinker Salas, professor at Pomona College and author of “The Enduring Legacy: Oil, Culture, and Society in Venezuela” and “Venezuela: What Everyone Needs to Know.”

Foreign Affairs Minister Chrystia Freeland spoke with Juan Guaido to congratulate him on unifying opposition forces in Venezuela, two weeks before he declared himself interim president.

Separately, Ottawa was told by opposition groups, former diplomats and Venezuelan émigré to expect a major announcement on Wednesday, the 61st anniversary of the end of a Venezuela military dictatorship in 1958, according to a senior Canadian government source who was not authorized to speak publicly on the matter.

NDP Leader Jagmeet Singh is questioning Canada’s decision to recognize a Venezuelan opposition leader as the country’s interim president, after prominent members of his party lashed out at the Liberal government’s foreign policy move Thursday.

In a statement to the Star, Singh said it should be up to Venezuelans to decide who leads their country, which was roiled by deadly protests this week as the socialist regime led by Nicolas Maduro tries to cling to power amidst economic collapse and a mass exodus of migrants from the South American nation.

As many American lawmakers, pundits, and advocacy groups remain conspicuously silent in response to U.S. President Donald Trump's decision to formally recognizeVenezuela's opposition leader as the "interim president"—a move that was denounced as open support for an attempted coup d'état—renowned linguist Noam Chomsky, filmmaker Boots Riley, and over 70 other academics and experts issued an open letteron Thursday calling on the Trump administration to "cease interfering in Venezuela's internal politics."

"Actions by the Trump administration and its allies in the hemisphere are almost certain to make the situation in Venezuela worse, leading to unnecessary human suffering, violence, and instability," the letter reads. "The U.S. and its allies must cease encouraging violence by pushing for violent, extralegal regime change. If the Trump administration and its allies continue to pursue their reckless course in Venezuela, the most likely result will be bloodshed, chaos, and instability."