Canadians like to think of themselves as peacemakers. The Saudi arms deal suggests otherwise 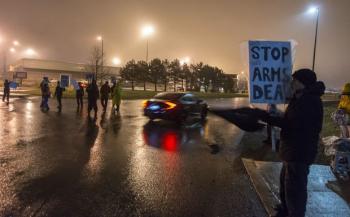 David Frank is professor emeritus in Canadian history at the University of New Brunswick.

They came, they saw, they stopped.

In the light morning winter rain, small cars and pickup trucks entered the open stretch of pavement on King Street West leading to the grounds of the Port of Saint John. The vehicles slowed, paused and parked. Several made wide U-turns and double-parked. For a short time, they blocked the way entirely, until police on duty advised them to open the road.

This was the scene at dawn last Saturday morning at the West Side Docks in Saint John, N.B., three days before Christmas. A line of demonstrators, no more than 25 or 30 in number, walked in the roadway in front of the port gates. A variety of homemade signs spelled out their message: “No LAVs for Saudi Arabia” and “Let’s Stop this Arms Deal.” A young woman dashed out to meet the cars, handing out flyers headed: “Why stop weapons shipments to Saudi Arabia?”

It was a small local moment in the continuing controversy over the export of Canadian-made light armoured vehicles (LAVs) to Saudi Arabia, an approximately $15-billion contract originally signed by the Conservative government of Stephen Harper and now proceeding under export permits approved by the Liberal government of Justin Trudeau. The arguments have been familiar ones – a notoriously repressive regime in the kingdom, a devastating war and famine in neighbouring Yemen and, to the dismay of many Canadians, our righteous stands in favour of human rights and humanitarian aid enormously contradicted by our exports of military hardware.

During the course of the fall in Saint John, citizens associated with groups such as the Council of Canadians and PEACE-NB, among others, were becoming aware that LAVs were being assembled for shipment through the port. Several Saudi ships arrived to pick up what was described as “roll-on/roll-off” cargo. Plans for a local protest were already gathering support when the Prime Minister, in weekend interviews 10 days before Christmas, said his government was looking at ways to stop these exports.

The scheduled ship did not arrive on Wednesday last week as originally expected, but the Bahri Yanbu, a modern cargo vessel of more than 50,000 tonnes capacity, slowly made its way up the east coast of North America during the week. Stopping off at several U.S. ports, it was set to arrive in Saint John before daybreak Saturday morning. On short notice, and with uncertain weather, small groups of demonstrators made their way to the port gates.

They were unsure of what impact they might have, but the response of the longshoremen was reassuring. They knew they would lose a day’s pay and face possible penalties, but they did not cross the picket line. Some headed up the street for coffee, others stood at the side of the road and watched. As the protest ended, the demonstrators joined the longshoremen, thanked them for respecting the picket line and gave them a round of applause. A friendly conversation followed and there were handshakes all around.

For those who know a little local history, the longshoremen’s response was not entirely surprising. In 1979, Saint John longshoremen famously refused to cross a picket line protesting the export of heavy-water supplies to the military dictatorship in Argentina. They succeeded in winning the release of several political prisoners. A second reactor deal fell through, and Canada reiterated its policy of not selling military materiel to repressive regimes.

Meanwhile, on Saturday in Saint John Harbour, the Saudi cargo ship remained offshore for the remainder of the day. Twenty-four hours behind schedule, it came into dock at 1:30 a.m. Sunday. It was back out to sea within 12 hours.

Business as usual? For Canadians, as the journalist James M. Minifie once said, it has long been a question of peacemaker or powder-monkey. Canadians like to think of themselves as peacemakers but too often discover that they are playing the part of powder-monkey.

It remains to be seen whether Mr. Trudeau will find a way to suspend or cancel the Saudi contract. Certainly, many Canadians are not comfortable with the deal, and polls tell us they are opposed to future deals of the same kind.

Canadians do not like to be seen as one of the world’s largest arms exporters. At the same time, we are proud of our expertise and skill in building advanced equipment of many kinds. And we have a responsibility for existing jobs, including those at General Dynamics in London, Ont., where the LAVs are manufactured. Canadians know there must be better ways to utilize our industrial capacity than by supporting repressive regimes and promoting the international arms trade.