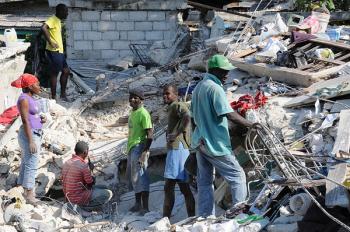 Three years after the earthquake, major changes needed to avoid an aid legacy of deeper poverty for Haitians

Billions of dollars of aid to Haiti have been pledged or spent following the devastating earthquake on January 12, 2010.[1] Yet three years later, life remains very harsh for many of the country’s ten million people. By every social, economic and environmental measure, Haiti’s prospects for post-earthquake progress remain exceptionally challenging. The U.S., Canada and other wealthy countries need to end the destructive cycle of interference in Haiti’s sovereign affairs. They have a duty to provide meaningful assistance not only for obvious humanitarian reasons but also in recognition of the harm committed against the Haitian people over the decades by big power interference.

What has international aid achieved?


These and other success stories, however, are far outweighed by the disappointments and setbacks:


There are reasons to be optimistic in looking forward in 2013. The Haitian people are rising from the post-earthquake devastation to assert their political rights and national sovereignty. Community and social organizations are forging new paths of development. Substantial and meaningful assistance continues to flow to Haiti from the Haitian diaspora, neighbouring countries in Latin America and from an unprecedented international solidarity movement.

But substantial progress requires that governments in Canada, the U.S. and Europe cease interfering in Haiti’s political affairs. They should direct earthquake recovery assistance to institutions of Haitian society and cease using the  non-representative and costly “republic of NGOs” as a weapon of foreign policy.

The Haitian government must respond decisively to the needs of the population. Creation of meaningful employment is vital. Tens of thousands of jobs can be created through programs to build public housing; repair and construct national infrastructure such as roads, electricity, communication, and water and sanitation systems; expand the public education system; renew and develop the agricultural economy; extend the gains made in health care delivery; and restore and enhance Haiti’s biosphere. The illegal and criminal MINUSTAH military and police mission of the UN Security Council should immediately be withdrawn and reparations for all the damage and illegalities it committed must be made.

Haitians were their own first responders in the hours and days after the earthquake. Having survived cooperatively in tent cities or shattered neighbourhoods for the last three years, earthquake victims and the entire country deserve policies that empower their community organizations and their local and national governments. The Canada Haiti Action Network will continue to support the popular struggle in Haiti for political sovereignty and a government of social justice.

This statement and other information on Haiti can be found at:
www.canadahaitiaction.ca