Declaration of the 1804 Movement for All Immigrants 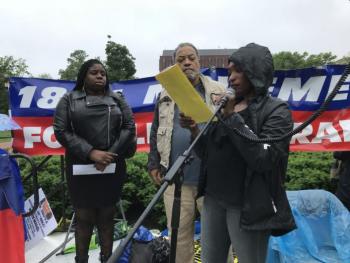 On Jan. 11, President Donald Trump, in a meeting with a bipartisan Congressional delegation about immigration, called Haiti, El Salvador, and African nations “shithole countries.” Two days later, over 50 Haitian and North American organizations and activists met in Brooklyn to decide how to respond.

The response was that on Jan. 19, in windy 20 degree weather, about 1,000 people marched four and a half miles from Brooklyn’s Grand Army Plaza, across the Brooklyn Bridge, past the Federal Building and City Hall, and then rallied in front of the Trump Building at 40 Wall Street in Manhattan.

The demonstrators demanded an apology from Trump, permanent residency for all 400,000 holders of Temporary Protected Status (TPS), and an end to the UN police occupation of Haiti. They also called for U.S. and UN reparations for Haiti and to stop racist police violence in the U.S.

This new coalition needed a name. It wasn’t just Haitians. It also involved Latin Americans, Africans, and North Americans. After much debate, we decided to call it: The 1804 Movement for All Immigrants.

Haiti’s 13 year revolution ended with it declaring independence from France on Jan. 1, 1804. It was the first successful slave revolution, the first black republic, and the first nation of Latin America, and helped Bolivar to free the rest of Latin America. 1804 symbolized the beginning of the end of slavery and the liberation of the continent.

Today we are fighting a new form of slavery. An insatiable, war-waging empire, with its political capital right here, enslaves our countries, where our people are forced to work for pennies a day for U.S. corporations. If we in the Caribbean, Latin America, Africa, or Asia try to flee our plight, to sell our smarts and labor elsewhere, we are arrested by the U.S. Coast Guard or Border Patrol. We are imprisoned in our homelands, while the U.S. demands complete freedom to buy land, set up businesses, and sell products there. Our “shithole countries” are, in fact, modern slave colonies, neo-colonies.

It is very fitting that we are here in Lafayette Park for two reasons. First, that White House over there was built by slaves. It is symbolic of this entire country. The U.S.’s stupendous wealth began with the enslavement of Africans – theft of labor – and the genocide of the Native Americans – theft of land. In short, this nation, the richest in the hemisphere, was founded by Indian-massacring slave owners.

Just the opposite is true for Haiti, the poorest nation in the hemisphere. It was founded by slaves who freed themselves, who rejected racism and subjugation. The American Declaration of Independence pledged to wipe out “merciless Indian Savages.” But the self-freed slaves of Saint Domingue honored their island’s original inhabitants, the Arawaks and Tainos, who had called it Haiti.

So by rallying here, we remind North Americans that U.S. slavery and expansionist war are what account for the persistent racism in this society and the emergence of a Donald Trump.

The second reason we are here in Lafayette Park is the statue over there in honor of Jean-Baptiste Donatien de Vimeur, comte de Rochambeau. It is fitting that he stands here near the White House. He helped the American slave-owners at the battle of Yorktown in what historian Gerald Horne calls the “Counter-Revolution of 1776.” He was the father of another French General Rochambeau whom Napoleon Bonaparte sent to resubjugate the rebellious slaves of Saint Domingue. But the barefoot army of former slaves drove General Rochambeau and Napoleon’s legions from the island in the Battle of Vertières on Nov. 18, 1803.

So the 1804 Movement for All Immigrants is here to tell both President Trump and General Rochambeau, just as our ancestors did two centuries ago, that we will not go back into slavery. We demand the freedom to live and work where we want. We want permanent residency for all those living and working here under Temporary Protected Status. We want UN troops out of Haiti, and U.S. meddling out of Haiti’s elections.

Above all, we want an end to war, both in the U.S., where police forces daily attack and terrorize black and brown communities, and overseas, where today the Trump administration is carrying out aggression, both overt and covert, both directly and through proxies, against Palestine, Venezuela, Iran, and Syria, to name just those.

The Haitian flag was made 215 years ago yesterday, on May 18, 1803. The slogan on it is: L’union fait la force. Unity makes strength. We are here in unity today to demand a world that our Haitian ancestors fought for: one based on respect, freedom, justice, and peace.