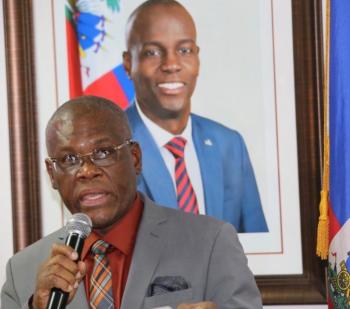 Haiti’s new loyalist prime minister Joseph Jouthe in front of a poster of the man who named him, President Jovenel Moïse.

Besieged Haitian President Jovenel Moïse unilaterally appointed his former Environment and Finance Minister, Joseph Jouthe, 58, as his new Prime Minister on Mar. 2, upsetting moderate opposition members who had been negotiating with him to form a “consensus government.”

Jouthe replaced interim PM Jean-Michel Lapin, who had been serving in the post since Moïse engineered the ouster of Jean Henry Céant in March 2019.

“Following consultations that I’ve had with different sectors of the nation, I am choosing citizen Joute JOSEPH as the new Prime Minister, who is called upon to form, as soon as possible, a government of openness and consensus, capable of responding to the urgencies of the moment,” Moïse tweeted on Monday evening. He tellingly misspelled Jouthe’s surname and capitalized his first name rather than his family name, as is customary, raising questions as to how well the president knows his new head of government.

Moïse had previously nominated Fritz William Michel to replace Lapin in June 2019, but, despite several attempts, the Parliament never succeeded in ratifying either man. Jouthe is now the fifth prime minister Moïse has named, but the new PM shows no signs of being any more likely than his predecessors to succeed in taming a 20-month mass uprising against the president.

“PRESIDENT JOVENEL MOÏSE MADE A UNILATERAL DECISION, THEREFORE HE CHOSE THE PATH OF CONFRONTATION.”

On Jan. 13, Moïse dissolved the Haitian Parliament, leaving him ruling by decree and without a legislature to ratify his PM choice.

He had been holding talks with the most pliable sectors of Haiti’s fragmented opposition, and they were vexed that he chose a head of government without their approval.

“For the umpteenth time, Jovenel MOÏSE, by appointing one of his fanatics to the post of de facto PM, has rolled in the flour [tricked] the so-called moderate opposition parties,” tweeted former Aquin deputy Jean-Robert Bosse of the Struggling People’s Party (OPL), who was part of negotiations. It is “a sure victory for those who believe as hard as iron that no POLITICAL agreement is possible with Mr. MOÏSE.”

“President Jovenel Moïse made a unilateral decision,” Ménard said. “Therefore he chose the path of confrontation.”

André Michel is a spokesperson of the opposition’s Democratic and Popular Sector, a major component of a more radical opposition front, the Consensual Alternative for the Refounding of Haiti, which refused to negotiate with Moïse. He was not surprised by the move.

President Moïse “deceived everyone,” Michel said. “He deceived civil society. He deceived political parties thinking he was dealing in good faith. He even deceived the ‘international community’ which was expecting a political agreement at the end of these discussions.” By “international community,” Michel is referring to Washington and its allies, whose officials have been pushing for dialogue and compromise between Moïse and the opposition demanding his resignation.

Joseph Jouthe, an engineer by training, had been Lapin’s Minister of Economy and Finance, as well as Environment Minister. In 2017 and 2018, he had been a special counselor in the cabinet of Moïse’s first and most loyal Prime Minister Jack Guy Lafontant, who was forced to resign in July 2018 after a protest against government-mandated fuel price hikes which paralyzed Haiti for three days and began the current revolutionary uprising.

Jouthe was born in the rural town of Thomonde on Haiti’s Central Plateau and was a Regional Director of CARE International in Haiti and the Director of Analysis and Evaluation at the Office for Monetization of Development Aid Programs (BMPAD). He has also worked as a consultant, liaison officer, and administrator for the United Nations in Haiti.

Jouthe faces an on-going popular revolt to which even Haiti’s police force is beginning to adhere. The UN says that one-third of Haiti’s 11 million people now face serious food insecurity, the stage that precedes famine according to the classifications used by the World Food Programme.