Haitian women struggle to get help for children fathered by U.N. troops 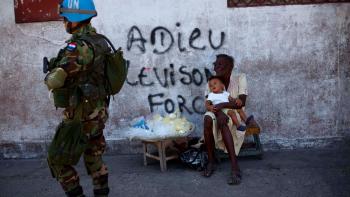 The United Nations is failing to give Haitian mothers who say their children were fathered by peacekeepers the help it promised in their legal battle for financial support, human rights groups helping the women have said.

The Haiti-based Bureau des Avocats Internationaux and the Institute for Justice & Democracy in Haiti (IJDH) filed a lawsuit against the U.N. in Haiti in 2017 on behalf of 10 mothers seeking child support.

Living in the poorest country in the Americas, they say the Haitian mothers are struggling to bring up children fathered by soldiers from Uruguay, Argentina, Nigeria, and Sri Lanka who were stationed in Haiti as U.N. peacekeepers.

“Women are afraid, discouraged and are fighting just another day to feed their kids. What they want is child support so their kids can eat and go to school,” said Brian Concannon, head of the U.S.-based IJDH.

“It’s practically impossible for these Haitian mothers to enforce their right to get child support,” he told the Thomson Reuters Foundation.

Sexual relationships between peacekeepers and residents of countries hosting a U.N. mission are strongly discouraged. But the U.N.’s peacekeeping arm does not take responsibility for financial assistance to children fathered by peacekeepers.

“Paternity or child support entitlements depend on the legal processes in the state of nationality of the mother and child and/or that of the father,” said Vannina Maestracci, a U.N. spokeswoman, in an email.

The struggle to force peacekeepers to contribute is faced by thousands of women in countries where the troops are deployed, from Mali and the Central African Republic to the Democratic Republic of Congo, said Concannon.

There are no figures available for the number affected in Haiti, where Concannon said the U.N. had helped in providing DNA testing to some but not all of the women involved. Some had not received the results.

“The U.N. promised to help with the legal cases, cooperate with the local justice and Haitian government and not evoke immunity in such cases. But the U.N. has so far failed to do much of what it had promised,” he added.

Some are homeless, while several children have severe health problems, the rights groups said.

The paternity and child support issue is another controversial legacy of the 13-year U.N. mission, which left Haiti in 2017 after being sent in to stabilize a country plagued by political turmoil.

U.N. peacekeepers have been dogged by accusations of sexual assault and were blamed for introducing a cholera epidemic in 2010 that has killed more than 10,000 Haitians.

Maestracci said the U.N’s victims rights advocate had “engaged” with the rights groups representing the Haitian women, and was working to ensure they were supported.

“The victims’ rights advocate is aware that more remains to be done and is committed to supporting and empowering the victims,” she said.