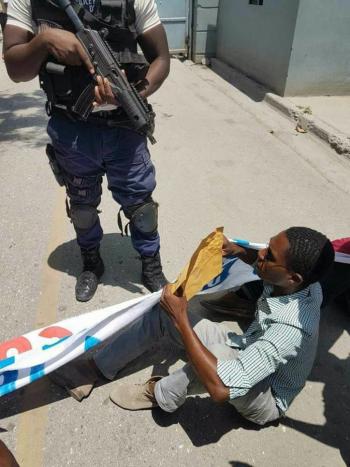 Haitian university students peacefully protested in front of the Prime Minister's office under the muzzles of police guns on May 11, 2018.

May 18, 2018 will mark the 215th  anniversary of the creation of the blue-and-red Haitian flag, a day when Haitians worldwide display their national pride.

But this year, there is not much to be proud about because the Haitian government is neglecting the nation’s educational system resulting in over 100,000 young people fleeing to South American nations, particularly Chile, over the last year.

That was message in a May 14th  statement of the Engaged University Youth of Haiti (COJEUEH) as it launched a week of demonstrations leading up to May 18.

“When we consider the meager money in the university budget, we see that higher education is not a priority of this State, which rather maintains the status quo so that college kids have to pack their bags and flee overseas,” the COJEUEH wrote.

When the university students held their first protest in front of the Prime Minister’s office on May 11, Haitian police pointed guns at them. In student demonstrations, civilians wearing T-shirts of the ruling Haitian Bald Headed Party (PHTK) carrying submachine guns have also threatened them.

Undeterred, on May 15, the COJEUEH held a picket-line in front of the Court of Accounts to demand that the judges there investigate and explain what happened to the millions of dollars embezzled from state coffers filled with revenues from a tax on phone calls and money transfers, donations to the international earthquake relief authority (CIRH), and the PetroCaribe fund, which has money from 40% of the nation’s fuel sales.

The students plan demonstrations each day for the rest of the week “in front of other public institutions in the country to push the authorities to assume their responsibilities to build a good public policy linked with integration and employment to prevent the youth from leaving the country, to ask where [disappeared journalist] Vladjimir Legagneur went, to say ‘no’ the hike in gas prices, and ‘yes’ to the involvement of the youth in the country’s decisions.”

“The Constitution, the flag, and the national hymn are the three fundamental elements which make up the spinal column of the nation,” COJEUEH said. “Today, we cannot be proud … because each day these symbols of the Haitian people are losing their meaning.”