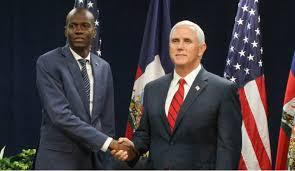 The opposition Pitit Dessalin party says it plans to stage a series of activities, including street demonstrations, to protest Haiti's decision to support an Organization of American States (OAS) resolution not recognising the legitimacy of the Nicolas Maduro presidency in Venezuela.

Haiti, along with the Bahamas, Jamaica, Guyana and St Lucia supported the OAS resolution last week, while Dominica, St Vincent and the Grenadines and Suriname voted against the measure.

St Kitts-Nevis, Trinidad and Tobago, Antigua and Barbuda, Barbados, and Belize abstained during the vote earlier this week, while Grenada was not present when the matter was put to the vote.

Haiti later said that it was under no pressure from the United States to vote in support of the resolution as Madura began his second five year term in office.

But in a letter sent to President Maduro, the general secretary of Pitit Dessalin, Jean-Charles Moïse, pointed to the “strong link” between the two countries and insists that Port au prince should always stand in support of Venezuela.

“Even if all the other countries of the world voted against Venezuela, Haiti should take a stand for Venezuela, for several reasons.

“Haiti is the mother of freedom; the founder of the Haitian nation, Jean Jacques Dessalines, preached solidarity among all peoples; the historical links that exist between these two sister nations; our past morally obliges us to respect the right to self-determination of peoples,” he wrote, noting that “Venezuela is the only country in the world to support Haiti without interference”.

Moise said that during Haiti's economic problems and at a time when the international community made loans available to the French-speaking Caribbean Community (CARICOM) country “at a high interest rate, about 13 per cent, Venezuela, for its part, claims only one per cent”.

Moise said that the vote at the OAS “does not reflect the will of the Haitian people” and that he intends to visit Caracas “in the coming days”.

He said that the party is also preparing a “series of activities, including sit-ins, protest movements, with the flag of the Bolivarian Republic of Venezuela and that of Papa Dessalines” to show its support for Venezuela.

The Pitit Dessalin party is among opposition groups here staging street demonstrations in support of their calls for President Jovenel Moise to step down, after accusing him of not investigating allegations of corruption in the previous government over PetroCaribe, an oil alliance of many Caribbean states with Venezuela to purchase oil on conditions of preferential payment.

Several people have died as a result of the protests.