As living conditions and corruption worsen this Mayday, Haiti’s political situation is unraveling 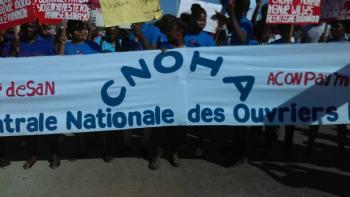 Caption: This Mayday, Haitian workers marched through the capital’s central square, the Champ de Mars, demanding a minimum wage of $15 per day.

Workers again took to Haiti’s streets this May 1st International Workers Day to demand a three-fold increase in the official minimum wage from 350 gourdes (US$5.38) to 1000 gourdes (US$15.36) per day. The Confederation of Haitian Workers (CTH), the National Central of Haitian Workers (CNOHA), and other unions led the protests through the central Champ de Mars. (In the U.S., unions have mounted a similar national campaign to win a $15 per hour minimum wage.)

On the “National Holiday of Agriculture and Work” (as May 1st is called in Haiti), President Jovenel Moïse’s government is allowing “rats to eat the little rice remaining to peasants in the Artibonite [Valley], while the ‘Caravan against Change’ [wordplay on Jovenel’s ‘Caravan for Change’] allows the Artibonite river’s water to run to the sea while seeded land is not irrigated and crops don’t grow, and while the Caravan wastes more than three billion [gourdes]” in pointless, corruption-ridden rallies, wrote the popular organization Tèt Kole Ti Peyizan Ayisyen (Heads Together of Small Haitian Peasants) in a May 1 declaration. “Workers get no salary or a pathetic salary while the government takes 400 million gourdes [US$6.15 million] from ONA [the National Office of Old Age Insurance, Haiti’s Social Security] to buy tractors for members of the PHTK [Moïse’s Haitian Bald Headed Party], money that is supposedly for the workers.”

Haiti’s worsening economic situation has forced over 145,000 young people to fly to Chile in search of work over the past 15 months that Moïse has held power.

Amidst widespread frustration over economic stagnation and government corruption, a deadly incident erupted at the Café Trio Cultural Center in Cap Haïtien on Apr. 28 when right-wing Senators Youri Latortue and Jacques Sauveur Jean were the head-liners in a “conference/debate” about the embezzlement and wasting of some $3.8 billion from the Venezuela-provided PetroCaribe fund over the past few years. Even the U.S. Embassy in Wikileaked secret cables called Latortue “ a poster-boy for political corruption,” so Haitians’ skepticism of his presentation was as high as tension in the room.

As Latortue was about to answer a question, one or more tear-gas grenades were evidently lobbed at the stage by unidentified persons. Jacques Dubois, a local radio host and the spokesman for the Tropicana Orchestra, was killed and many other people were seriously injured by the unventilated C3 gas and resulting stampede in the crowded room.

"Shadowy forces have stepped up the pace of their violence against the people,” declared former president Jean-Bertrand Aristide’s Lavalas Family party (FL) in a press release. “Some are trying to find enough leaves to cover up the PetroCaribe dossier, to make the people forget it... [The attack] clearly shows that the sector that doesn’t want to get to the bottom of this matter will stop at nothing.”

The PHTK is the sector to which the FL is alluding. President Moïse has maneuvered to derail Parliamentary action on the PetroCaribe dossier.

Meanwhile on Apr. 27 in the south-eastern locality of Bleck, near the town of Thiotte, the population rose up against and chased away officers of a newly-formed specialized police unit called the Brigade for Intervention Against Land Insecurity (BRICIF), which had come to expel alleged squatters from some land. Witnesses say the BRICIF fired on and wounded a teenager during their operation. The enraged local residents pursued the cops while throwing stones. They then looted and burned two vehicles in which the police and two surveyors had come.

Taken from the cars were an Israeli-made Galil 5.56 mm caliber rifle, a 12 gauge shotgun, and 9mm handguns. Local authorities are attempting to locate and retrieve the weapons.

Government officials and national police authorities say they had no prior knowledge of and had not authorized the raid. Predictably, Thiotte’s Deputy, Vickerson Garnier, was scathing in his critique of the BRICIF agents, saying they should have consulted the local population before taking any decision or action.

Nonetheless, Léon Ronsard Saint Cyr, the Secretary of State for Public Security, emphasized the government’s "determination to fight land takeovers in all their forms" while praising "the exemplary and professional behavior of the police officers in the face of threats and stone throwing.”

The government’s efforts to find funds to stabilize Haiti are looking increasingly desperate. Foreign Minister Antonio Rodrigue has been visiting Taiwan (the so-called Republic of China) from Apr. 29 until May 2 to meet with President Tsai Ing-wen, as well as the Taiwan Power Company, Taiwan External Trade Development Council, Taiwan Cement Corporation, Taiwan International Cooperation and Development Fund, and the Overseas Investment and Development Corporation.

Out of 195 nations, Haiti is one of the mere 20 which recognize the “Republic of China” and support its admission into the United Nations. For this support, the Haitian government is counting on an infusion of much-needed cash from Taiwan. Such double-dealing could torpedo offers of massive aid from the People’s Republic of China, which calls Taiwan a “renegade province.”

Politically, the government is also in trouble. In an attempt to appease the opposition and strike a conciliatory posture, it launched a project for a “national round-table conference” under the pompous name of “Sectoral General States of the Nation.” After leading intellectual Claude Moïse and former prime minister Jacques Alexis withdrew from participation in the project (after being unilaterally named to it), now Catholic Bishop Louis Kébreau has also withdrawn his support. Those defections are liable to seriously weaken, if not completely sink, this public relations stunt.

On May 1, 16 deputies signed a letter sent to the lower house president, Gary Bodeau, saying they will summon Prime Minister Jack Guy Lafontant for a hearing that could result in his dismissal. They want to charge him with “serious violations of the Constitution, serious violations of the 2017/2018 Finance Law, flagrant cases of corruption..., non-compliance with his general policy plan, and generalized bad governance.”

Only five deputies are required to launch a challenge of a prime minister.

“We ask to government to stop lying to the people, stop its political campaigning, and get down to concrete steps to develop the nation’s agriculture so we can truly celebrate this day in perhaps 10 years,” Tèt Kole concluded in their May 1 declaration. “Stop mistreating workers and allow them to receive a 1000 gourdes minimum wage, as they have been asking, so they can support their families. And really reflect on the plundering of state coffers and the PetroCaribe fund, a theft and waste for which the Haitian people will have to pay very dearly.”