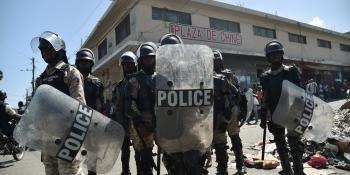 At least 21 people have been murdered in Haiti, after a group of men in uniform opened fire on unarmed residents in an impoverished neighbourhood.

The men arrived in Port-au-Prince, the country's capital, in a police truck, carrying machetes and guns.

They were accompanied by local gang members and went house to house, gathering up unarmed civilians who they then shot dead or killed with machete blows in alleyways.

"When I saw them I thought they were providing security but then I realized they were shooting at the population,” said Marie-Lourdes Corestan, a local resident. “They were shooting, and I was running to save my life.”

She said that neighbours told her that the men had killed her unarmed 24-year-old son.

Survivors have many theories about the masked killers behind the massacre. Some claimed the group were gang members working with corrupt police officers.

Others speculated that Haitian government officials had orchestrated the killings to prevent anti-corruption protests that often start in the neighborhood, which is an opposition stronghold.

United Nation (UN) peacekeepers left Haiti in October 2017, at the end of 13 years, because conditions in the country had supposedly improved.

But Port-au-Prince residents told reporters that a number of neighbourhoods in the city were controlled by armed gangs.

“These lawless zones are multiplying,” said Marie-Yolene Gilles, head of a local rights group, Fondasyon Je Klere, which put the death toll as high as 25.

“The authorities have said nothing,” she added. “They haven’t even condemned this massacre.”

“There were worrying episodes of violence in some of the most notorious neighborhoods of Port-au-Prince, areas where state authority is limited,” Helen Meagher La Lime, head of the UN Mission for Justice Support in Haiti, said.

“Investigations by both the authorities and human-rights organizations are ongoing, and our human-rights service is also working to determine what happened.”