New documentary, “Another Vision,” to investigate the truth behind “gangs” and revolution in Haiti 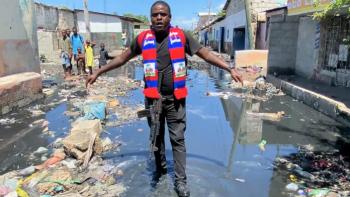 In a scene from Another Vision, Jimmy “Barbecue” Cherizier stands in the flooded Boston neighborhood of the Cité Soleil slum to explain the plight of Haiti’s poor majority. Credit: John Wesley Amady/Haïti Liberté

Since the Jul. 7 assassination of President Jovenel Moïse by Colombian mercenaries, the Haitian people have effectively had no coherent state leadership.

Two weeks after the grisly killing, Washington and its allies, assembled in an ambassadorial front called the “Core Group,” appointed Dr. Ariel Henry, a long-time U.S. ally, to be the interim prime minister and de facto president, despite the fact that he spoke just hours after the killing to the man, Joseph Félix Badio, whom authorities believe ordered the triggermen to gruesomely riddle Moïse with bullets.

Watch the trailer for the documentary Another Vision: Inside Haiti’s Uprising

Henry has refused to provide any explanation of his many conversations with Badio in the days before and after the assassination, and most Haitians reject his legitimacy and suspect his involvement.

This has created a national leadership void that is being filled by the “Revolutionary Forces of the G9 Family and Allies: Mess with One, You Mess with All” (FRG9), an alliance of armed neighborhood organizations formed in June 2020.

Their charismatic leader and spokesman is Jimmy “Barbecue” Cherizier, a former elite police commander who has become an outspoken opponent of Henry and a champion of Haiti’s vast urban underclass, which makes up most of Port-au-Prince’s three million residents.

Cherizier has called for a revolution against the “stinking, rotten system” controlled by the “corrupt bourgeoisie,” under which 5% of Haiti’s population controls 86% of its wealth and resources. He has threatened to lead Haiti’s impoverished masses in seizing the bourgeoisie’s grocery stores, car dealerships, and banks in order to take back what he says “rightfully belongs to the people.”

The U.S. Embassy, and the human rights organizations it supports and works with, have branded Cherizier as a “criminal.” Washington has targeted him with Magnitsky Sanctions, and the U.S. diplomats tasked with overseeing Haiti’s rump government’s policies have repeatedly emphasized the need for the Haitian state to crush the growing power of the “gangs,” and in particular the FRG9.

Indeed, the neighborhood groups affiliated with the FRG9 find themselves in a bitter struggle with other neighborhood groups that are either supported by the bourgeoisie or live off of criminal activities, including merchant extortion and widespread, indiscriminate kidnapping.

The FRG9 formally seeks to stop such criminal activity but has ironically been accused of being its principal purveyor by human rights groups, which Cherizier says have “transformed themselves into political parties,” affiliated with the loyal opposition backed by Haiti’s bourgeoisie and working with PM Ariel Henry.

A new film, produced by MintPress News in collaboration with Behind the Headlines and the weekly Haïti Liberté, will explore the fierce debate raging around the dangers and potential of the FRG9, taking the viewer inside the neighborhoods caught up in a dramatic ideological and armed struggle.

“Another Vision: Inside Haiti’s Uprising,” whose trailer is now posted on YouTube in English and Kreyòl, will also offer an intimate look at the deep passions, personal sacrifice, and political intrigue that are the hallmarks of this dramatic chapter in Haiti’s history, and perhaps a notion of what the future holds for this long-suffering people.

Dan Cohen is the Washington DC correspondent for Behind The Headlines and MintPress News. He tweets at @DanCohen3000. Kim Ives is an investigative journalist and English-language editor at Haïti Liberté. He tweets at @kimives13.