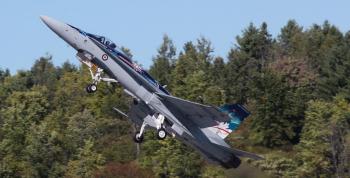 Progressives should be pushing to defund or abolish the Canadian military. But, first we need to stop bolstering its capacity to kill in U.S. and NATO lead wars.

The jets are expected to cost about $19 billion but the full life-cycle cost of the planes will be closer to $77 billion. These resources could fund clean drinking water on reserves, an exhaustive search of all unmarked graves at residential "schools" and plenty of Indigenous-run co-operative housing. Or: "$77 billion could turbocharge a just transition away from fossil fuels," notes the letter.

While the letter highlights better ways to use the resources, it also points out that "purchasing new jets will entrench fossil-fuel militarism." Fighter jets consume large amounts of heavy carbon emitting fuel and their high-altitude release point increases the climatic effect.

But, the primary reason to oppose fighter jets is their violent nature.

"Canada's current fleet of fighter jets has bombed Libya, Iraq, Serbia and Syria," notes the letter. "Many innocent people were killed directly or as a result of the destruction of civilian infrastructure and those operations prolonged conflicts and/or contributed to refugee crises."

Purchasing cutting edge new fighter jets will enhance the Canadian military's capacity to kill alongside the most violent nation the world has ever seen. In essence, the planned jet procurement will channel massive amounts of public resources into one of the most destructive parts of the military, which is among the most damaging elements of our government.

While a vitally important campaign, stopping the fighter jet procurement is a rearguard action. We need to defund the military, which sucks up $30 billion a year.

In his near-successful campaign to lead the Green Party of Canada, Dimitri Lascaris proposed reducing military spending by half. At the recent NDP convention, one resolution called for "the phasing out of the Canadian Armed Forces."

Despite the commonly held view that states should have militaries, about 20 countries don't have an active military force. They are mostly small Caribbean or South Pacific island nations, but the list also includes Costa Rica, Iceland and Panama. If the Canadian Forces were abolished, Canada would still have a coast guard, border services agency, municipal police forces and the quasi paramilitary RCMP.

Slashing military spending in half or abolishing the Canadian Armed Forces (CAF) is important. But, the 100,000 Canadians (70,000 active soldiers and 30,000 reservists) in the force, as well as the 25,000 individuals working for the Department of National Defence require alternative employment and ways to contribute socially.

How about training some soldiers to clean the huge amounts of ordnance, chemicals and other waste from bases as part of advancing reconciliation with first peoples? Once properly cleared, some of the land could be returned to First Nations; a great deal of Indigenous land was taken to build bases. The CAF could return 500 or 1000 square kilometres a year of its 20,000 square kilometers land over a decade or two, which would still leave it with about half the landmass of Switzerland.

It is also imperative to convert weapons production. Again, those producing arms require more socially and ecologically sustainable employment. In some instances, this may be relatively straightforward. A light armoured vehicle production line can be rejigged to assemble buses, for instance. But, new plants and significant retraining may be required in other instances.

Progressives should be pressing to defund the military. But, first let's block efforts to strengthen its capacities to drop bombs in U.S.- and NATO-led wars.

Yves Engler is the author of 11 books. His Stand on Guard For Whom? — A People's History of the Canadian Military is available next month.