Opinion: My wife and I fled Haiti to escape gang violence. Others on our journey did not make it. 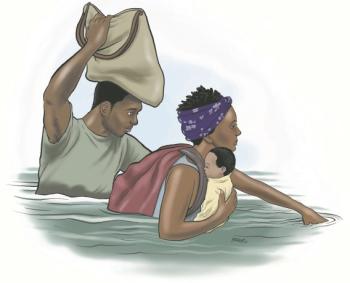 My wife and I fled Haiti in 2016, trying to escape violence, insecurity and lack of access to health care. We left many family members behind, including my mother and father and my two little sisters. We traveled to Brazil with one of my cousins, and made our way to the United States.

Violence in Haiti is widespread. Bandits run the entire country, including my hometown. They have access to the lawmakers, state public representatives and justice officials. When people try to start their own small business or stand up against violence, organized criminals target them and their families. They burn down businesses and homes, and threaten to kill innocent people.

This is the case for my family. I fled after a local powerful gang targeted my family because my uncle sold lottery tickets as an independent vendor. The gang ambushed my uncle’s vehicle with him, my cousin, a driver and me inside. Gang members assaulted me during the attack, leaving a giant scar on my left foot. The head of the gang made several demands and ransacked everything inside the vehicle. They fired at the vehicle and left, forcing my uncle to give up his business. I feared for my life. I thought I would get killed that day.

My uncle did everything in his power to help us get out of Haiti. Regrettably, less than a year after my cousin and I arrived in Brazil, the gangs ambushed and killed him. My remaining family members are still in hiding.

Initially, when we left Brazil, we took buses and walked to arrive in Bolivia. We spent seven days walking in a forest, crossing many countries, including Peru, Ecuador and Columbia, and arrived in Panama.

We faced many challenges, including finding fire to cook, finding a safe place to sleep at night to stay warm and dry when it rained, and protecting ourselves from wild animals. It was tough because my wife was eight months pregnant.

Luckily our group brought enough food to survive. But I came across individuals who were too weak to continue the journey. I would make them tea and energy drinks to boost their strength so they could continue.

My baby was born four days after we arrived in Mexico. I had mixed emotions when that happened. Imagine welcoming your first child into the world, and not having the financial means to provide basic necessities. However, I felt blessed that my wife delivered a healthy daughter with no complications.

I don’t know why so many Haitians ended up arriving at the same time at the Texas border. Everyone has different circumstances. Some people traveled from Haiti to Brazil and Chile. Many of them have parents or siblings living in the United States whom they have not seen for years. Sometimes it seems easier to get to the United States this way as opposed to waiting for the formal process of applying for a visa to reside in the U.S. The wait is eternal.

We saw the horrible images of Haitians being sent back home and thousands gathered in Del Rio, Texas. It is inhumane and cruel to witness the administration deporting people to a country in crisis. Recently, the Haitian president was assassinated, which is evidence that the situation there is dangerous. We have no access to protection. In addition, the country just got hit with a 7.2 magnitude earthquake on top of political instability. The condition in Haiti is dire.

At the end of August, we first entered the Mexican state of Coahuila, in Cuidad Acuña, across the river from Del Rio, Texas. We spent three days there. But there were so many people gathered there we decided it was better to go elsewhere so we made our way to Mexicali just east of San Diego.

The odds of losing our lives were extraordinary. I understand we were blessed to make it to the United States. I know many Haitians who took the journey but did not make it. Among those who died on the road include some who perished while crossing deep rivers, those who died as a result of lack of food and water, and others who died under the gun of violent assailants on the road. Americans need to understand that people face death before arriving on U.S. shores.

I am still not confident about what our future will bring. Will the authorities allow us to stay, or will they deport us? I don’t know when I will be able to work. For now, Wister Gaetan, another fellow Haitian in San Diego, has graciously offered my family unconditional support, including a place to stay, food, transportation and social assistance.

My biggest dream includes obtaining legal status. We have made an enormous sacrifice. And just being allowed to make our case for asylum is worth it. My child will get access to education. More importantly, she can become anything she wants to be. She will have choices here that she would never have back home in Haiti.

Pierre is a native of Croix des Bouquets, Haiti. He is married with a 3-month old daughter.