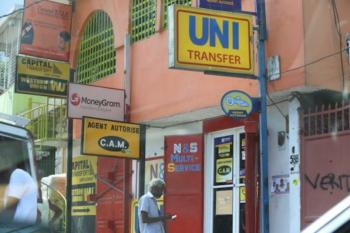 When Odlion Celestin, 43, sends money to his family in Haiti from his residence in Miami, he always believed that the $1.50 wire transfer fee enacted by former President Michel Martelly in 2011 would help pay for his family’s education.

However, on a trip back to Haiti since leaving for the United States in 1998, he saw that nothing had changed. The school he once traveled to for three hours after work growing up was gone.

“I said: ‘god, what do we have to do to change something in Haiti?’” he recalls.

Wanting legal advice on the matter, Celestin reached out to Brooklyn-based, Haitian-American attorney Marcel P. Dennis through a radio show where he got his phone number and eventually flew up to New York to pursue the lawsuit.

“I asked him: how could we come together to be the change, to find a way to help me out with this,” he says.

Celestin’s testimony is one of a few that’s stated in a multi-million dollar class action lawsuit filed on Dec. 24 that accuses Martelly, Jocelerme Privet and current President Jovenel Moise of pocketing money that came from wire transfers companies like Western Union, Unitransfer, Natcom and CAM that were meant to fund education in Haiti.

The lawsuit doesn’t come as a complete surprise given the string of allegations where the Haitian government has been accused of corruption lack of donations after the 2010 earthquake and the August 2018 Petrocaribe scandalwhere $2 billion was embezzled.

Shortly after Martelly was elected President, he called for education reform that would allow for free and universal education for all students through a government subsidy program known as PSUGO. According to court documents, his administration had intended on building schools in 10 different regions that never came to fruition.

In June 2011, Martelly began to impose fees to raise money for free education. As a result, a fee of $1.50 for each wire transfer in addition to five cents a minute on telephone calls were charged to Haitians living abroad who routinely send money to their families. At the time, Martelly claimed that the fees would generate $144 million over five years.

From the start, the act was met with skepticism from the Haitian diaspora who wanted to provide aid in rebuilding Haiti but were unsure about where the education money would go. As of 2017, Haitians abroad send $2 billion annually to their country. Some like Celestin, however, seemed optimistic that the fees to fund schooling was a step in the right direction.

Attorney Marcel P. Dennis, one of the two lawyers who filed the lawsuit at Brooklyn Federal Court, explains why imposing fees has failed.

“The reason why it’s so poorly concocted is the fact that they do not have an agent on sight at every money transfer agency or bureau in Haiti,” Dennis says. “Here, in the United States, we check out the money that will be transferred over to the agent of Western Union or CAM. That is the absurdity of the whole scam.”

If Western Union, Unitransfer and CAM were complying with Martelly’s law, the blame would ultimately have to be shifted to the Bank of the Republic of Haiti Central (BRH) who are responsible for financing such a program.

Following the earthquake, Western Union had announced they would be suspending transfer fees sent to Haiti from the United States, Dominican Republic, France and Canada-countries with significant Haitian populations outside Haiti. In addition, its foundation also donated $250,000 to help provide basic necessities to the Haitian people.

Dennis says while the idea to raise money for education is a good one, more could’ve been done to ensure that the money had gone into the right hands.

“The idea was a novel idea but it could’ve been done legally,” he says. “If it were done legally, it could not have reached us here in the United States or elsewhere. This was something that should’ve been limited to Haiti only.”

Ultimately, Celestin hopes the money that had disappeared would eventually come back and is optimistic about winning the lawsuit.

“We want to put this money back to the schools,” he says. “We have to come up with a plan. Now, we have to pull a plan for education. For real education, not a fake one. That’s why if we win a lawsuit tomorrow, money will go back to education where people can get a good education for the future, not for the corruption of government.”

Bianca Silva is a journalist and photographer living in New York City. She has written for TIME, Amsterdam News, TODAY.com, Harlem Focus and The WEEK.