Taiwanese Ambassador tossed out of Haiti after incident at National Palace 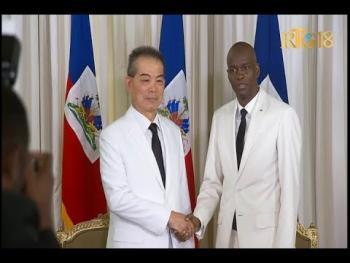 The head of the US-backed regime in Haiti has returned the Ambassador of Taiwan to his country following what was described as "a little incident" at the National Palace. Reports suggest the ambassador had made some reference to the Tet Kale president Jovenel Moïse's involvement in the squandering of billions of PetroCaribe development dollars.

Claude Joseph who has been acting a Minister of Foreign Affairs confirmed to Le Nouvelliste that Taiwanese Ambassador Bernard Bang-zyh Liu was ejected. He said that, Jovenel Moïse, the leader of the US-backed Tet Kale regime is awaiting the Taiwanese government to send Bang-zyh's replacement.

"The president is shortly waiting for a new ambassador. It is a question of national sovereign... There was a small incident with the ambassador which was quickly resolved," said Joseph without giving, at least on the record, any details of the incident.

Ambassador Bernard Bang-zyh Liu served on a mission that ran from 2010 to 2014 and returned to Haiti towards the end of 2019 to replace Hu Cheng-Hao.

Le Nouvelliste, a 120-year old newspaper in Haiti, hinted that the circumstances of the ambassador's disagreement with Moïse would be similar to that of the departure of the former United Nations head in Haiti, Susan D. Page. Page was returned after welcoming the appointment of a magistrate to address the complaints of corruption regarding the PetroCaribe fund. Jovenel Moïse had been cited dozens of times in reports by Haiti's auditing courts as a main figure in money-laundering and fraud schemes that squandered the $4.2 billion [USD] agreement.

Haitians and Haitian-Americans have called for the United States to suspend diplomatic relations with Haiti in order to give the country's political leaders an opportunity to resolve a wholly political crisis. U.S. diplomats in Haiti have created a buddy system with other states and their diplomats that also deepen the political crisis in the country. Taiwan is not exempt.