What does “brain drain” have to do with the lawsuit against Trump’s TPS cut-off? 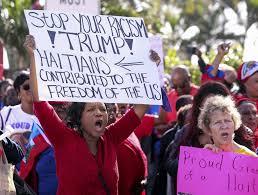 New York Haitian community members and their allies braved the blistering cold on Jan. 7 to attend a 9:00 a.m. press conference outside the U.S. District Court for the Eastern District of New York in Brooklyn and later packed the courtroom in support of the 11 Haitian plaintiffs (including a newspaper and community group) bringing the suit of Saget et al v. Trump.

I was there to support the plaintiffs – a symbolic representation of the 50,000 members of my community whose Temporary Protected Status (TPS)* has been revoked by the Trump Administration.

When, during cross-examination, a government lawyer asked an expert witness testifying for the plaintiffs whether she was familiar with the notion of “brain drain,” I was flummoxed and surprised. I laughed quietly and nervously in the crowded courtroom. What would the follow-up question be? What relevancy does brain drain have for the case? I thought and waited. But the government lawyer made no further reference to brain drain in his cross-examination before Judge William Kuntz.

That moment caught my attention because about eight months earlier I had discussed the notion of brain drain and its impacts on the Caribbean during a presentation. Since I am Haitian, I had tried to explain what that meant in the context of Haiti, in my understanding. Thus, I left the courtroom that afternoon ruminating why the lawyer planted the brain drain idea in the minds of the judge, lawyers, plaintiffs, defendants, and audience.

Lawyers, like poets, do not use words loosely. Words have impact. Lawyers are trained and equipped with language skills that can “build and/or destroy” things and people, as the American critical discourse analyst James Paul Gee has noted. In short, lawyers’ words have purpose and are never used innocently.

Back at home, I rushed to the notes from my brain drain presentation. While not heavily researched, brain drain as a construct connotes the idea of draining the brains – or professionals, intellectuals, skilled workers – of a country. The United States and other developed nations have siphoned off the brains from Haiti and many other nations, and this dynamic started long ago.

U.S. SUPPORT FOR DICTATORS AND COUPS D’ÉTAT IN HAITI OVER THE PAST 60 YEARS HAS ALSO CAUSED MASS EXODUSES, COSTING HAITI MANY OF ITS “BRAINS.”

Take, for example, Pierre Toussaint, a slave from the French colony of Saint Domingue – present-day Haiti – who accompanied his master to New York City in 1787. Toussaint worked as hairdresser to the elite. A devout Catholic, he became a prominent philanthropist in the city, using his money to establish an orphanage and do-good. Pierre Toussaint is buried under the altar of Manhattan’s Saint Patrick’s Cathedral, an honor bestowed upon Catholic bishops of the Archdiocese of New York.

U.S. support for dictators and coups d’état in Haiti over the past 60 years has also caused mass exoduses, costing Haiti many of its “brains.” It can even be argued that the 1965 U.S. Immigration and Naturalization Act – enacted in the midst of the U.S. Civil Rights Movement as a means to undermine African-American work stoppages to protest Jim Crow segregation – contributed to draining the brains of many Caribbean and Latin American countries. Doctors, nurses, welders, electricians, wood-workers, and other professionals from the region were offered U.S. permanent residency for an affordable fee. Many took the opportunity to leave their homelands ruled by U.S.-backed dictators.

I suspect that the Trump Administration’s lawyer floated the notion of brain drain to set up a possible, if laughable, defense: that the return of 50,000 TPS holders to Haiti will bring back brains to help the country develop.

As the trial continues the rest of this week, I hope that the plaintiffs’ lawyers prepare well their response if the brain drain question returns to the floor. They should demonstrate that these 50,000 individuals cannot reverse the centuries-long colonial and neocolonial abuse and plunder of Haiti and its people. It will take much more to undo Haiti’s pauperization and replace the hundreds of thousands forced into voluntary and involuntary exile over the years because of difficult political and economic conditions fostered by entities like the World Bank, the International Monetary Fund, and the industrialized nations that need, and continue to feed on, their sweat, tears, and blood.

* Temporary Protected Status (TPS) is given to nationals of designated countries affected by armed conflicts or natural disasters, TPS allows these individuals to live and work in the United States for a limited times. Haiti is still reeling from recent hurricanes and floods, a cholera epidemic, plus the devastating 2010 earthquake.