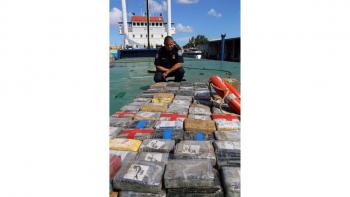 Dylan J. DeFrancisci, port director for U.S. Customs and Border Protection, is shown with 2,000 pounds of cocaine that was hidden on a Haitian freighter on the Miami River, the biggest drug bust in more than a decade, on Wednesday, June 1, 2016. Roberto Koltun rkoltun@elnuevoherald.com

Allegations of misconduct involving the Drug Enforcement Administration's Haiti office are raising questions about the effectiveness of the U.S. drug-fighting efforts in the country, the House Oversight and Government Reform Committee says.

And it wants the Justice Department to get involved.

Committee Chairman Rep. Trey Gowdy, a Republican from South Carolina, and Rep. Elijah E. Cummings of Maryland, the top Democrat on the committee, have written to Justice's Inspector General Michael Horowitz asking him to review allegations of potential mismanagement and misconduct in Haiti's DEA country office.

"Because of the seriousness of these allegations, we request that your office initiate a review," the May 14 letter said.

While offering few specifics, the letter said the committee received information that "raises serious concerns relating to the handling of personnel matters and whistleblower retaliation, among other things.

"These concerns were verified in part by reports of investigation written by DEA's Office of Professional Responsibility and transmitted to the Committee in response to a letter to then Administrator Chuck Rosenberg on May 11, 2017. The Committee also received information that raises questions about the effectiveness of DEA's drug investigations in Haiti."

Amanda Gonzalez, who serves as communications director for the committee, said the members have yet to receive a response to the request.

"Unfortunately we can't share whistleblower information (including the characterization of the allegations)," she said in an email.

The DEA office in Miami referred inquiries about the matter to the Office of Professional Responsibility in Washington.

Haiti's DEA office currently has a staff of eight, and agents in recent years have been involved in several high-profile operations alongside Haiti National Police.

In January 2017, agents helped arrest Haiti senator-elect and ex-rebel leader Guy Philippe, who had eluded capture for more than a decade. He was extradited to the U.S. Six months later, he was sentenced to nine years in prison after pleading guilty to accepting between $1.5 million and $3.5 million in cocaine profits from Colombian traffickers for allowing them to use Haiti to ship cocaine to Miami and other parts of the United States between 1999 and 2003.

A year earlier, DEA agents also joined Haiti police in a seizure of several kilos of cocaine and 10 kilograms of heroine aboard the Panama-flagged ship Manzanares that docked at a private Haiti port, carrying sugar from Colombia.