Why is Canada so hot under the collar about Venezuela? 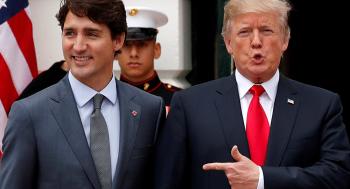 For mild-mannered Canada, the denunciation of Venezuelan President Nicolas Maduro was unusually harsh.

“Having seized power through fraudulent and anti-democratic elections,” Freeland went on, “the Maduro regime is now fully entrenched as a dictatorship…

“We call on him to immediately cede power.”

Exactly why Justin Trudeau’s Canadian government is so hot under the collar about Maduro is unclear.

True, Venezuela is a mess economically. In part, this is the result of outside pressure from those opposed to the regime. But in the main, the Maduro government’s sheer incompetence is to blame.

Maduro himself has said that internal corruption is the biggest culprit.

True also that the election last summer that returned Maduro to power was flawed. But arguably so was the election last year of Brazil’s new right-wing President Jair Bolsonaro. In that contest, Bolsonaro’s most formidable opponent, left-leaning Luis Inacio Lula da Silva, was barred from running.

Certainly, a country’s failure to follow democratic norms has not bothered Canada in other instances.

Ottawa does not question the legitimacy of China’s Communist President Xi Jinping.

It gets along famously with Middle Eastern autocrats in the United Arab Emirates. It has never fussed much about the fact that Egyptian President Abdel Fattah el-Sisi seized power in a bloody military coup.

And while it has complained about the Saudi Arabian monarchy, it has never questioned the legitimacy of that undemocratic regime. Indeed, it is famously supplying the Saudis with weapons.

What makes Venezuela so special?

In part, the answer may be that Ottawa wants to stake out a position in Latin America. Canada is already an economic player in the region and hopes to do more business there.

In taking on Venezuela, Ottawa has allied itself not only with the new rightist government in Brazil but with other countries in the 14-member Lima Group, such as Argentina and Peru.

Thirteen members of the Lima Group, which was set up in 2017 to challenge Maduro, issued a separate communiqué last week attacking the Venezuelan president.

Tellingly, Mexico — one of the group’s original members — refused to sign it.

The third dynamic is the proverbial elephant in the room: the U.S.

Last fall, the New York Times reported that American officials had met secretly with Venezuelan coup plotters for more than a year, stopping only after Maduro’s security forces arrested most of the would-be putschists.

But the U.S. has to be careful. Its history of deposing governments unfriendly to American business is not remembered fondly in Latin America.

In the event of a coup, it would be better for the U.S. if no fingerprints were left that might implicate Washington.

And it would be better still if the fiercest rhetorical attacks on Maduro’s political legitimacy came from non-U. S. sources — like Canada.

So why is Ottawa so exercised about Venezuela? I suspect it’s not. I suspect it doesn’t much care what happens in that country.

But at time when Canada is increasingly offside from Trump’s Washington, Prime Minister Justin Trudeau’s government is looking for areas in which it can demonstrate to the U.S. that it is still a staunch ally.

And Maduro is a convenient target.