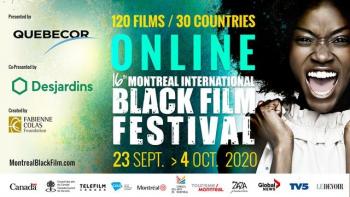 “Haiti Speaks,” “Junior,” “Black Boys”, and a discussion of “ANITA” are among the works highlighting Haiti and Haitians on screen during The Montreal International Black Film Festival (MIBFF) kicking off Sept. 23. Now in its 16th year, the festival featuring 120 films from 30 countries is a virtual event due to Covid-19.

Created by the Fabienne Colas Foundation, MIBFF opens on Sept. 23, with the showing of a Canadian film, “The Cuban.” From Sept. 24-Oct. 4, 120 films from 30 countries, including Haiti, will be available for viewing. The virtual festival also features a movie discussion honoring the 40th anniversary of the Haitian film “ANITA,” directed by Rassoul Labuchin.

In addition to a series of free virtual events and panels, the festival offers passes, allowing access to the entire selection of films. These passes can be purchased online for $49.

“This historic 2020 online edition highlights the tales and events that have challenged conventions, left a distinctive mark on our times, and changed how we see the world,” said Haitian-Canadian actress Fabienne Colas, president and founder of MIBFF, in a press release.

Fabienne Colas Foundation created the festival in 2005. It is the largest Canadian film festival dedicated to highlighting the diverse range of Black experiences throughout the world.

This year’s films include “Haiti Speaks,” a short documentary directed by Ashley Ellis that follows a team of American doctors, who made a medical trip to Haiti 100 days after the devastating 2010 earthquake. The film is available in French and English.

“Junior,” another featured film directed by A.J. Wilhelm, follows an acclaimed Haitian drum maker and musician as he discovers a new, unexpected audience for his work. The short documentary is available in Haitian Creole, with English subtitles.

The festival closes on Oct. 4 with a screening of “Black Boys,” produced by activist and former National Football League star Malcom Jenkins. The full list of films is available here.

In addition to the “ANITA” discussion on Oct. 3, MIBFF features panels on “Racebending in Film and Television,” “Black Women Behind the Camera” and more. Panels and special events are offered in French and English and will broadcast online and via Facebook Live.

“MIBFF in the Neighborhood,” gives youth access to a movie discussion on Sept. 25, at the Cultural and Community House in Montreal. The short drama film “Mahalia Melts in the Rain,” directed by Carmine Pierre-Dufour and Emilie Mannering, will be shown, followed by the mid-length documentary “Breaking the Code,” by Nicolas Houde-Sauve. Screenings will be followed by a discussion, and attendance will be limited for the in-person event.

“We feel privileged to be able to amplify the voices of more Black Filmmakers at such an important time in our history,” Colas said.