Racial capitalism and the betrayal of Haiti 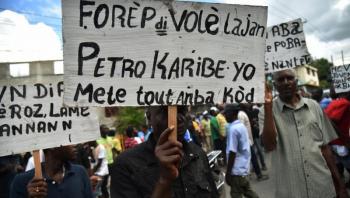 Domination by multinational corporations and “light-skinned” local capitalists—that’s the story of Haiti as illustrated by one recent event.

According to most Haitian constitutional authorities and institutions, Moïse’s presidential mandate ended on Sunday, February 7, 2021. But the next day, Le Moniteur—the official journal of the Republic of Haiti—published a presidential decree gifting 8,600 hectares of the country’s agricultural land reserves to produce stevia, a main ingredient in Coca-Cola’s zero-sugar beverages.

Alongside land in the Artibonite and Plateau Central regions, Moïse put up US$18 million for a new Free Agro-Industrial Export Zone run by the Apaid family.

It is outrageous, notes civil society group Le Regroupement des Haïtiens de Montréal contre l’occupation d’Haïti, that the state would offer land to a firm producing for Coca-Cola rather than invest in local food production in a country where nearly 42 percent of the population, or four million people, are experiencing acute hunger.

Whether or not the officially named “Zone Franche Agro Industrielle d’Exportation de Savane Diane” moves forward, the decree is a stark example of “racial capitalism” in Haiti and why Washington and Ottawa have played a role in keeping Moïse in place. Unlike most Haitians, the Apaid family are not descendants of enslaved Africans. Born in the United States, André Apaid Jr. is a sweatshop owner of Lebanese background.

Apaid led the Group of 184—allegedly developed by the American International Republican Institute—in opposition to Jean Bertrand Aristide’s government. He also reportedly financed the paramilitary forces led by convicted drug smuggler Guy Philippe, whose attacks created the pretext for US, French and Canadian forces to oust Aristide in 2004 (days after Philippe told a local radio station in 2007 that Apaid funded his forces, the US Drug Enforcement Agency raided Philippe’s home in the south coast city of Les Cayes).

At the time of the coup, Apaid also financed and armed a gang in the impoverished community of Cité-Soleil led by Thomas “Labanye” Robinson to kill supporters of Fanmi Lavalas, a social-democratic political party formerly led by Aristide. American lawyer Thomas Griffin interviewed Cité Soleil leaders and police officers who said Apaid “bought” Labanyè with a payment of US$30,000. He also reportedly enabled Labanyè’s wife to travel to the US and “keeps police from arresting the gang leader.” Various professionals and businesspeople told Griffin that Apaid was “the real government in Haiti.”

During the 1991-1994 coup against Aristide, Apaid Jr.’s father, André Apaid Sr., was “one of the chief lobbyists in the US” for the military junta. Previously, Apaid Sr. was “close to dictator ‘Baby Doc’ Duvalier.”

During the regime of Jean-Claude Duvalier, Apaid Sr. founded Alpha Sewing. In the 1970s, with Haiti’s population cowed and economic prospects in the countryside dire, ‘Baby Doc’ developed a relatively thriving low-wage assembly sector. Alpha Sewing eventually became the biggest sweatshop operator in the country, and the firm was expectedly hostile to any effort to increase the minimum wage.

One of the richest men in Haiti, Apaid Jr. is a leader among the community of Middle Eastern descent that currently dominates the economy. Well-connected businesspeople of Haiti’s upper class including Gilbert Bigio, Sherif Kedar Abdallah, Reginald Boulos, Dimitri Craan and Reynold Deeb Saïeh work with North American and Dominican sweatshop owners, industrialists and other oligarchs. Apaid, for instance, was the prime Haitian subcontractor for Montreal-based t-shirt maker Gildan Activewear, which has a major presence in Haiti. In April 2009, US Secretary of State Hillary Clinton visited an Apaid factory to tout its partnership with Gildan as an important model for Haitian economic development (Apaid was invited to a Canadian government conference on Haiti in Montréal attended by former Prime Minister Paul Martin a few years earlier).

Washington has been important to the descendants of Middle Easterners who dominate Haiti’s economy. Partly to supplant European influence, Washington facilitated Arab migration to Haiti in the late 1800s. At the start of the twentieth century, 60 percent of imported goods sold to the Haitian peasantry came from US manufacturers who supplied Syrian middlemen. When violence targeted the Syrian community US authorities advocated on their behalf.

One element driving the US-Arab migrant relationship in Haiti was that until the US rewrote Haiti’s Constitution in 1918, foreigners were restricted from owning land. This prompted some European businessmen, particularly Germans, to marry into prominent mixed-race families to be able to own property. But US capitalists were at a disadvantage compared to their European counterparts. US race politics deemed someone Black if they had just “one drop” of African blood. So even marrying an educated, upper class, mixed-race Haitian woman was considered unacceptable by most white US capitalists.

Indeed, American interests bypassed this dynamic by working with migrants from the Middle East—and this legacy of racism still explains much of what happens in Haiti today.

Jovenel Moïse needs to go. So does the “racial capitalist” system of local light-skinned oligarchs working with foreign powers who support his rule.

On February 28, the Canadian Foreign Policy Institute is hosting a discussion of the film Haiti Betrayed, a powerful indictment of Canada’s role in the 2004 coup and subsequent policy in the country. The movie is available to watch for free for those who register in advance.