10 years after Haiti’s earthquake, a crossroads 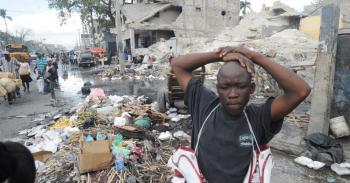 January 12 marked the 10th anniversary of a devastating earthquake in Haiti. But its aftershocks can still be felt today, in the mass protests against corruption and cutbacks.

Nearly 30 years ago, in 1992, Boukman Eksperyans released their Grammy-nominated album, Kalfou Danjere (“Dangerous Crossroads”). It became the soundtrack for the mass protests and demonstrations that led to the fall of Jean-Claude “Baby Doc” Duvalier’s regime. That album channeled a population’s frustrated exasperation with subtle notes of hope.

The long-simmering year of discontent in Haiti does not have a full album yet, though Haiti is once again at a “dangerous crossroads.” Like 30 years ago, today’s Haitians are in the streets demanding change and fighting for hope. To wind up here, the country followed a route that ran right through devastation and the realities it exposed. That road leads from the massive earthquake in 2010 to the massive protests today.

More than 300,000 people died from the 7.0-Richter earthquake on January 12, 2010 and its aftermath. Approximately 1.5 million people lost their homes and wound up in refugee camps mostly on the outskirts of Port-Au-Prince and Jacmel. But among the rubble in the weeks after laid the hope of deep structural, systemic change. Like Hurricane Katrina and New Orleans or Hurricane Maria and Puerto Rico, the earthquake shook the varnish off a corrupt government, top-down humanitarian intervention, and an NGO-industrial complex more interested in its own expansion than serving the community.

International non-governmental organizations (NGOs) and humanitarian aid organizations rushed into Haiti, often without much experience there. They would only stay as long as Haiti stayed in the newscycle. As Mina Remy, then-Solidarity Program Officer for Haiti and West Africa reported, the parachuting NGOs left the refugee camp residents “to fend for themselves.” Despite raising almost half-a-billion dollars from Americans’ desires to help, the American Red Cross infamously built just six permanent homes for the displaced, with the remaining funds missing in action.

Yet Grassroots International’s partners, those from and of Haiti, were organizing much more robust relief given the resources they had available. With the $60,000 in emergency funds Grassroots immediately raised after the earthquake, our partners provided human rights observers in the camps and food, water, and fuel to those who had lost everything. Unlike the big NGOs who were largely unaccountable to the people of Haiti, Grassroots built our solidarity off decades-long relationships with social movements.

Our partners were also identifying the root causes of the destruction and death before the rubble had even settled. Why else had 300,000 Haitians died in a 7.0 quake while only 795 Chileans died in a 8.8 quake just weeks later? It was not just the particular seismic waves, but the slum conditions in which Haitians were forced to live. These grassroots movements called for bottom-up solutions led by the people themselves: decentralize government services, give back local control of food systems, build a solidarity economy, and make deep investments in rural, farming communities.

"Building Back Better..." for Business

Instead, Haitians were told opening the country to foreign direct investments would be the vehicle for “building back better.” Much of the foreign aid that filtered into the country in the months and years after the earthquake went to projects like hotels and tax-free trade zones which were completely unrelated to the needs and lives of the people.

Even worse, where the Haitian government didn’t outright hide the existence of the refugee camps (sometimes literally behind 10-foot walls, as Mina saw in 2013), officials let them go without water, electricity, and trash collection. Or the National Police bulldozed them where they prevented “economic development.” In Delmas, for example, the government displaced refugees for a second time, by machete and hammer, when their camp encroached on a proposed industrial park. Camp residents demonstrated against evictions and even in losing some battles, the bitterness remained, smouldering.

Elites in Haiti enriched themselves through bribes and corruption schemes after the quake to the harm of everyone else. In many ways, this corruption foreshadowed the Petrocaribe scandal at the heart of the protests in Haiti today. In a very real sense, Haitians are worse off now than they were prior to the earthquake.

This is exactly what Haitian social movements predicted amid the aftershocks: if Haiti’s reconstruction failed to address the root causes of poverty and entrenched inequality, conditions would worsen over time. Though three months of mass protest in 2014 forced then-Prime Minister Laurent Lamothe to resign, the system that enabled the corruption went unaddressed. With these roots having festered for so long, these same social movements are once again calling for deep structural and systemic change.

Today the country is experiencing multiple crises—political, economic, environmental, and social. For decades, Haitian capitalism has let the country’s poor barely survive, or die in the earthquake rubble of the slums, while its wealthy thrived. But the poor are refusing to just scrape by anymore. They want to flourish, and they’re shaking and dismantling this system down to its very core. We should celebrate its destruction, for its very existence was an affront to Haiti’s founding principles born from the revolts of slaves.

Haiti is at a crossroads—a place it’s familiar with—but movements of the poor, former earthquake refugees and small farmers are taking the path to leadership. They are offering a hopeful vision for the country, based on a just transformation and rooted in liberty, equality, and fraternity.

Mina Remy is the current Director of Philanthropic Partnerships at Grassroots International and the former Solidarity Program Officer for West Africa and Haiti. She has accompanied and built solidarity with Haitian social movements, including mass peasant organizations like the Peasant Movement of Papaye (MPP) and the National Congress of Papaye Peasant Movement (MPNKP).

Chris Morrill is the Donor and Online Communications Coordinator at Grassroots International and a political organizer based in Boston, MA.