After the earthquake, a mayor in Haiti struggles to console his town 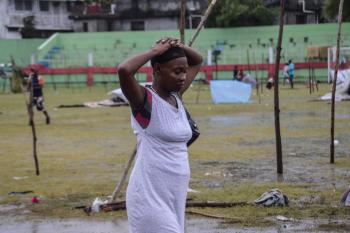 In January, 2010, Edwin Ceide was on vacation with his family, in Norway, when the earthquake struck Léogâne, Haiti. He had left just days before; if he had remained in Port-au-Prince, he told me, “My kids, my family, we all would be dead.” The losses in his neighborhood were immense. A close friend’s wife and son died in the rubble of their two-story home. The friend, who survived, spent three days buried with them, until a tractor cleared the debris. One of the children of a neighbor—“a ten-year-old child who was the friend of my kids,” Ceide said—was tasked with burning the uncovered bodies. “In a cold way, like a grown adult, he tells me that everybody is dying and we need to burn the bodies,” Ceide recalled. “I started crying because now I realized how people change.”

All told, the earthquake killed more than two hundred thousand people and displaced 1.5 million others. To Ceide’s mother, the event was a bad omen. She was visiting with a friend in the neighborhood when her own house in Port-au-Prince collapsed. Afterward, she pleaded with Ceide to take her back to her home town, Saint-Louis-du-Sud, a rural hamlet covered with rice fields in Haiti’s southern region. “My mother was someone who prays a lot,” Ceide said. “She took it as a sign that she will die soon.” The town is a hundred miles from the capital, along narrow, winding roads. Ceide moved his mother there, along with his own family. Three years later, she passed away.

In 2015, Ceide, who studied conflict resolution in Norway and worked for fifteen years with Project Haiti, a medical and health-care nonprofit, was elected mayor of Saint-Louis-du-Sud. Last week, a magnitude-7.2 earthquake struck less than ten miles away and nearly razed the town. A three-hundred-and-twenty-year-old cathedral in the town’s center, which was rebuilt after the devastation of Hurricane Matthew, in 2016, was again severely damaged. Days later, Tropical Storm Grace swept through Haiti’s southern peninsula, further destabilizing rescue efforts. Haitians who lost their homes or are awaiting treatment at overrun clinics have been left to sleep under the sky; others have been too afraid to reënter their homes for fear of aftershocks. During our call, Ceide was sitting in his car when the ground started to shake. Crowds of people poured into the street. Ceide watched a mother grab her baby and run. “It’s scary, it’s scary,” he said. Reports estimate that nearly two thousand people have been killed in the aftermath of the earthquake and storm.

In Haiti, a tropical island nation of eleven million people, one tragedy appears to beget another. Last month, Haiti’s President, Jovenel Moïse, was assassinated; the ongoing investigation has been complicated by the killing of a chief clerk and the resignation of the judge overseeing the probe. Local armed gangs, some of whom have been in cahoots with the national government, have continued to stalk the streets, blocking central roads and making areas affected by the earthquake “virtually unreachable” for relief efforts.

The coronavirus pandemic still poses an exigent threat, too. Until last month, Haiti was the only country in the Americas without a single dose of the vaccine. Deaths from covid-19 have been steadily on the rise. In Les Cayes, Haiti’s third-largest city, where the damage from last Saturday’s earthquake has been even more extreme, the regional hospital has shut down its covid unit altogether, in order to treat trauma victims. Twenty miles away, in Saint-Louis-du-Sud, Ceide has spent the past few days meeting with local leaders and talking with constituents—many of whom he also counts as his neighbors and friends. “I’m here with them,” Ceide told me. “I won’t abandon them. So I keep faith. I’m working for them.” His account has been edited and condensed.

“I didn’t want to become a mayor, trust me. I like to do motocross. I love off-road sports. Saint-Louis-du-Sud is the best place to do it because we have a lot of mountains. A lot of nice beaches. So I’d go to the beach and swim and ride motorcycles, while still working with Project Haiti. I liked the free, adventure life style.

“Then my mother told me that it was not proper as a man to have this kind of life. To my mother, I was like a party boy. Even though we had Project Haiti, my mother was, like, ‘You have to be more engaged, because there’s a lot of youth who need a role model to take care of the city.’ You know Haitian mothers. She told me, ‘I raised you and you come from my stomach. I feed you. I have the right, you have to listen to what I say.’ And I say, ‘O.K., Mama.’ I didn’t say yes—I said, like, ‘Yeah, yeah.’ The night before she passed away, when we talked, she talked to me about politics. She told me, ‘I never ask you for anything—I want you to make my city better.’ And, when I went to make the campaign, I realized that everybody already knew me. Everywhere I went, people would say, ‘Ah, we don’t have to talk—your mother talked to us already.’ She had already done the campaign. So now here I am. I never have time to ride my motorcycle anymore.

“To be honest, I’m a straight shooter. Let me tell you, really, if you really want to hate your country, be in politics in Haiti. You will discover so much that you hate, so many fake people who lie to the people, take advantage of the people. Everything is about politics. You just want to run away. What I’m telling people is, when you want to make money, open a business. If you want to do politics, it’s because you want to change your country, change people’s lives. I learned so much in the administration. I learned so much about human beings. Mostly, I learned about good and brave people, about people who are still waiting for someone moral. People still have hope. They still have faith, no matter what. They’re still ready to fight and to rebuild this country.

“The morning of the earthquake, I was in Port-au-Prince. Saint-Louis-du-Sud will have its three-hundred-year-old festival this year, and I went to the capital for a meeting about the celebration. I was getting ready to go out, and the house was shaking a little bit. I thought, The house is shaking. What’s going on? I ran down to the yard, because I see that it’s an earthquake. My phone was upstairs. I went back in and was putting clothes on, and my phone started to buzz. When I opened the screen, I saw the pictures. People are asking me, ‘Where are you, where are you, Saint-Louis-du-Sud is destroyed.’ And my journey starts. I just put the bag in the car. Even from the road, I started to see the devastation. There were cemeteries where the tombs were removed from the ground. Then I realized how bad it was.

“Eighty-five per cent of the houses were completely destroyed. We have a big cathedral that’s three hundred and twenty years old, and it’s completely destroyed. People were really in shock. Some people, you have to touch them for them to react to you—when they see you, they just hold you and start crying, and start screaming.You see some people who spent a lifetime building their houses, starved themselves even. To build a house is a legacy. This is their own heritage, and then it’s all gone.

“I fed three hundred people today. I had to distribute some food to people in the countryside and people in the really remote areas in the mountains. Some places are a seven-hour walk. I had to deliver some food to them. I gave them a big portion of rice—a week’s worth for a family. Plus, I gave them some water and some energy drinks. And I had the opportunity to talk to them, too, and tell them that they have to wait a little bit, and that I’m here and things will be O.K.

“The clinic isn’t able to treat everyone that comes in, but they try to do their best. They’re all overworked. They go from shift to shift to shift to shift. They don’t sleep. The clinic has seven beds. That’s the only one—the other one is completely destroyed. They treat people out in the street. During the storm, it was windy, too, and really cold. It goes to the mind, to the brain, makes them frustrated, sad, angry, and desperate. When there isn’t enough space in the clinic, people take a car or motorcycle to Les Cayes. But Les Cayes is overwhelmed, so [the doctors] send them back, and they sit at home. In Les Cayes, they don’t even have the small materials that they need, alcohol and things. Yesterday, I saw a nurse who was stitching a guy without anesthesia—his ear fell off, so people had to hold his hand. He’s a tough guy, but he had to be held to be stitched.

“In Saint-Louis-du-Sud, people are still in the street. I received two hundred and twenty-five tarps from the Red Cross yesterday, so I started to distribute them. But it’s not enough, because we have over ten thousand people out in the street. They sleep on the grass. They put a small sheet on the grass and sleep on it, under the stars. I’m afraid people will start to get sick because they’ve been outside for a couple days under heavy rain. Many people will start to catch colds. There’s a lot of mosquitoes, too, and I’m afraid of malaria. Yesterday, there was a big rainstorm and I saw a woman with a baby getting wet. It was really heartbreaking.

“But people are still afraid to go inside, because of the aftershocks. Every time things start to cool down, some aftershock comes and reminds them of the same fear. It’s like nature is playing with them. I just go to visit them in the rain, talk to them, comfort them, and let them know I’m sorry. I tell them that it’s not human-made, the earthquake, it’s nature. Everybody gets touched by it. So we need solidarity. The few people who have, need to share with others. Solidarity and love. That’s all we need. And patience and faith.”