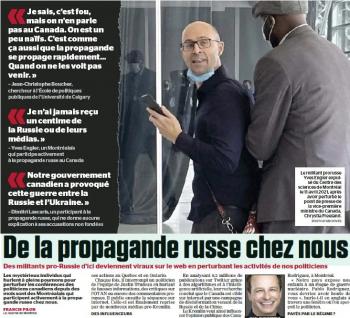 Le Journal de Montréal recently smeared me as a Russian propagandist. In a story based upon the ‘research’ of a Canadian military-funded academic, Québec’s most widely circulated newspaper links disrupting politicians on a host of issues to “Russian propaganda.”

While the article offers little detail about what I’ve written or said that constitutes “Russian propaganda,” Pilon cited my interruption of a speech by Chrystia Freeland at the Rebuild Ukraine Business Conference as an example on Twitter. At Wednesday’s Canadian Business Council sponsored event, I asked Canada’s deputy prime minister:

Apparently, calling on the Canadian government to push for negotiations is “Russian propaganda.” So is interrupting politicians about Haiti, Palestine, climate policies and more.

Pilon links dozens of political disruptions on various issues to “Russian propaganda.” The online report includes a photo of when I bumped into Environment and Climate Change Minister Steven Guilbeault on Saint Catherine Street in Montréal and labeled him a “climate criminal.” The lead photo is of a 2019 Solidarity Québec Haiti disruption.

The ‘intellectual author’ of the smear is Jean-Christophe Boucher. The University of Calgary professor told Pilon, “He is part of a network of people who actively participate in Russian propaganda in Canada… We know that he also participates in publications financed by the Russian secret services.” Boucher added, “We made a list of hundreds of influencers in our country who share or like the most Russian propaganda on Twitter. Yves Engler is among the most active in Canada.”

In June Boucher co-published a report entitled “Disinformation and Russia-Ukrainian War on Canadian Social Media.” The paper listed prominent Twitter accounts engaged in what it called “disinformation,” which includes “portraying NATO as an aggressive alliance using Ukraine as a proxy against Russia” and “promoting a specific mistrust of Canada’s Liberal government, and especially of Prime Minister Trudeau.”

At the time I exposed the absurdity of the report on Twitter and during my weekly Canadian Foreign Policy Hour. Boucher was not pleased.

While claiming former Green Party leadership nominee Dimitri Lascaris, myself and other anti-war voices are part of a Russian funded propaganda system, Boucher is a product of the Canadian military’s vast publicly financed ideological apparatus, which I detailed in A Propaganda System: How Canada’s Government, Corporations, Media and Academia Sell War and Exploitation.

Boucher was scheduled to speak at last week’s NATO Aspen Forum in Bucharest, which included NATO Secretary General Jens Stoltenberg. He has been a fellow at the military and arms industry funded Canadian Global Affairs Institute and Dalhousie Centre for the Study of Security and Development. He advocates theories amenable to the military’s interests, including “strategic retrenchment,” which is a sophisticated way of saying Canada should deepen its alliance with the US empire. His academic profile says Boucher “is a co-lead of the Canadian Network on Information and Security, funded by the Department of National Defence,” while his Canadian Global Affairs Institute biography notes that “he is currently responsible for more than $2.4M of funding from the Department of National Defence (DND) to study information operations.” The military put up the money to establish the Canadian Network on Information and Security (CANIS) as a joint project between the University of Calgary’s Public Policy Institute and Centre for Military, Security and Strategic Studies. A 2020-21 DND report labels CANIS among three initiatives “launched to tackle DND/CAF’s most pressing challenges.”

The University of Calgary School of Public Policy is essentially a right-wing think tank housed within a post-secondary institution, according to Donald Gutstein, author of two books on Canadian think tanks. It was set up in 2008 with $4 million from leading oil and gas lawyer James Palmer and launched at a $500-a-plate gala that included a keynote speech by George W. Bush’s Secretary of State Condoleezza Rice.

Researching this history for a previous article it became clear that Mr. Boucher can be fairly described as an intellectual fraud. I, on the other hand, have never received money from Russia or any foreign government. Nor am I funded by military or corporate interests. I have earned an extremely modest living through writing and public speaking for the past decade. I became a leading critic of Canadian foreign policy because I was appalled by Canada’s role in overthrowing Haiti’s elected government in 2004.

According to Boucher, any criticism of Canada and NATO’s actions in Ukraine—or disrupting politicians on the climate, Haiti or Palestine—can only be “Russian propaganda.” I disagree. Democracy requires opposition and constant debate.

Shutting down debate, insisting the government should not be criticized when it is promoting war and smearing critics are the tactics of authoritarian rule. Both Boucher and Le Journal de Montréal should be ashamed of themselves.