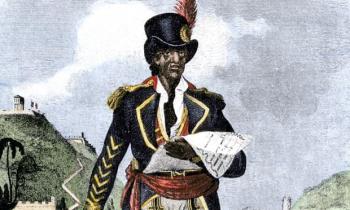 In January 1804, the West Indian island of Saint-Domingue became the world’s first black republic. The Africans toiling on the sugar-rich plantations overthrew their French masters and declared independence. The name Saint-Domingue was replaced by the aboriginal Taíno Indian word Haiti (meaning “mountainous land”) and the Haitian flag created when the white band was ceremonially ripped from the French tricolour. Two hundred years on, Haiti’s is the only successful slave revolution in history. It was led by Toussaint Louverture, a Haitian former slave and emblem of slavery’s hoped-for abolition throughout the Americas.

This superb new history of Louverture and his legacy portrays Saint-Domingue as the most profitable slave colony the world had ever known. The glittering prosperity of Nantes and Bordeaux, Marseilles and Dieppe, derived from commerce with the Caribbean island in coffee, indigo, cocoa and cotton; Saint- Domingue’s sugar plantations alone produced more cane than all the British West Indian islands together.

Whipped, chained and branded with the French fleur-de-lis, the slaves took up arms under Louverture – in the words of Napoleon Bonaparte a “gilded African”–and burned down plantation homes. The prospect of a free black state founded on the expulsion of its white community horrified the western world – this was half a century before the civil war liberated the enslaved peoples of the United States.

Sudhir Hazareesingh, a Mauritian-born historian, conducted much of his research in the French archives, where so many revolutionary-era documents are preserved. He has scrutinised letters from Louverture to a vast number of French officials and revolutionary republican organisations. Black Spartacus is not a dry academic work, though; with rare narrative verve, Hazareesingh conjures his subject’s extraordinary life.

Born in the north of Saint-Domingue in 1743 as the grandson of a captured African chieftain, Louverture was taught to read and write by French Jesuit missionaries and from an early age was familiar with the polemics of French abolitionist the Abbé Raynal. Like the majority of Haitians today, Louverture was most likely an adept of vodou (or voodoo, in the old, discredited orthography). Vodou, a New World religion that married elements of Catholicism with African animism-mysticism, disconcerted and sometimes frightened the French.

Most historians agree that Saint-Domingue first rose up under a Jamaican vodou priest named Dutty “Zamba” Boukman. One August night in 1791, Boukman called on the spirits of ancestral Africa to avenge the French. Reportedly, Louverture was present at the ceremony and within six weeks the island’s rebel armies had begun the 12-year Louverturian struggle for freedom. What made the struggle possible?

Politically adroit, Louverture set the enemies of the French Republic against each other and spread rumour among them

The French Revolution of 1789-91 proclaimed equality among all men: slavery was an intolerable injury to human nature. Unsurprisingly, the planters of Saint-Domingue refused to relinquish their privileges. Politically adroit, Louverture set the enemies of the new French Republic against each other and spread misinformation and rumour among them. To his allies, he became the “Black Spartacus”, after the slave-gladiator who defied imperial Rome.

In concisely written pages, Hazareesingh rescues Louverture from the ideological and political aggrandisements that so often misrepresented him in the past. In 1936, in Harlem, Orson Welles staged an Afro-Caribbean Macbeth extravaganza in which Macduff was portrayed as an implausibly princely Louverture. Much later, in the 1970s, the Latino rock band Santana dedicated a frantic electric guitar workout to Louverture. Such tributes pale beside the work of the Marxist Trinidadian historian CLR James, whose pioneering 1938 account of the Haitian revolution, The Black Jacobins, elevated Louverture to near-saintly status but ignored his monarchist leanings and occasional dictatorial tendencies. Hazareesingh, by contrast, is careful to return Louverture to the primary sources.

In May 1801, having acted as Napoleon’s faithful envoy for 10 years, Louverture declared himself governor for life of Saint-Domingue and called for the execution of all known or merely suspected “enemies”. Napoleon promptly abandoned his support of Louverture and organised an expedition to destroy the “new Algiers in the Caribbean”. Louverture ought to be clapped in irons or perhaps exhibited in a cage in Paris at the newly opened Jardin des Plantes, Napoleon reckoned.

Abducted by Napoleon, Louverture was imprisoned for five months in a dungeon-fortress in the Jura mountains of France. News of his imprisonment reached William Wordsworth in Calais in the summer of 1802; moved by the fate of the “most unhappy” revolutionary who had placed his trust in the French Republic, Wordsworth addressed a famous sonnet to Louverture.

From his snow-bound captivity, Louverture pleaded with Napoleon for his release, but he was found dead in his cell on 7 April 1803: “the Black Napoleon”, observed a caustic Chateaubriand, “imitated and killed by the White Napoleon”. Louverture did not live to see the proclamation of the Haitian republic the following year. He was 60. The man Hazareesingh calls the “first black superhero of the modern age” had, apparently, died of pneumonia.