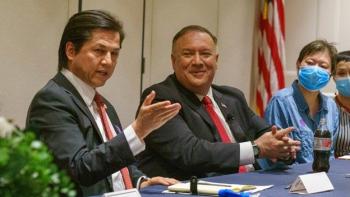 On November 12-14, 2021, Bloc-Québécois MP (Lac-St-Jean) Alexis Brunelle-Duceppe attended the World Uyghur Congress in Prague. He was invited to be on the legislative panel of the WUC. Who paid for his trip to Prague is unclear at present.

Brunelle-Duceppe proudly boasted that he was a delegate to the WUC and that he had at his side, the notorious Uyghur separatist Nury Turkel, whose Washington-based organization, Uyghur Human Rights Project, is directly financed by the CIA cut-out National Endowment for Democracy.

The Bloc Québécois’s website smugly announced that Brunelle-Duceppe’s resolution to postpone and relocate the 2022 Beijing Winter Olympics was unanimously adopted by the World Uyghur Congress. Brunelle-Duceppe is the son of Gilles Duceppe, the ex-Maoist renegade, ex-member of the Workers Communist Party and former leader of the Bloc-Québécois.

Groups such as the Ottawa based Uyghur Rights Advocacy Project were the drivers to push a Canadian Parliamentary standing subcommittee on foreign affairs to declare that China is committing genocide against the Uyghurs on Oct. 21, 2020. The URAP is affiliated with the World Uyghur Congress and its webpage blatantly shows its source of funding is the NED. The testimonies to the subcommittee were from the usual list of suspects including Christian zealot, Adrian Zenz. Brunelle-Duceppe was a member and Vice-Chair of this Subcommittee.

The BQ along with the NDP, Conservatives and a smattering of Liberals voted in favour of the Subcommittee’s recommendation to declare that China is committing genocide against the Uyghur people on February 22, 2021.

The World Uyghur Congress, an international umbrella group of various “Uyghur rights” organizations, including the UHRP and URAP, was formed in Germany in 2004 with direct funding from the National Endowment for Democracy (NED). The Executive Director of Uyghur Rights Advocacy Project, Mehmet Tohti, was a co-founder of the WUC, who served as Vice-President of the World Uyghur Congress for two separate terms, and was a "Special Representative” of the WUC to the European Parliament between 2010 to 2012.

The WUC is considered a terrorist organization by China. Its major goal is the separation of Xinjiang, which they call East Turkistan, and the destabilization of the Chinese government. The WUC hailed the removal of the East Turkistan Islamic Movement from the US list of terrorist organizations by the Trump administration in 2020. The UN continues to maintain that the ETIM is a terrorist group. The ETIM and the Turkistan Islamic Party were responsible for the wave of terrorism in Xinjiang and the rest of China from 2007 to 2014 which killed over 1000 people and injured countless others.

Brunelle-Duceppe takes his message to parliament yet again

Energized by the Uyghur congress, upon his return to Canada, Brunelle-Duceppe spoke in the House on November 30, 2021. Brunelle-Duceppe repeated his triumphant resolution at the WUC to raise a motion in Parliament calling for the postponement of the Winter Olympics and to move the Games from China to another country. He cited the fact-free reason, with language he picked up at the WUC,  of “Chinese government is arbitrarily detaining more than one million people in the Xinjiang region, thereby committing crimes against humanity against the Uighur minority and the Turkic peoples living on its territory and violating every provision of the United Nations Genocide Convention.” This time there was no announcement that the Canadian House of Commons, rejected the unanimous consent motion, which only requires a few members opposing it, to be blocked. So less fanfare for a failed motion.

A few days later, December 2, 2021, on the occasion of the International Day for the Abolition of Slavery, Brunelle-Duceppe spoke again on the Uyghur question and again without any factual evidence decried the Uyghurs being “victims of genocide, forced labour and slavery.” This is ironic coming from an MP whose party still denies systemic racism in Quebec and has not address the legacy of racism and slavery against the Indigenous and Black peoples in the province. The Bloc-Québécois continues the oppression of Muslim women with its support of Quebec’s Law 21.

Wholly swallowing the false Uyghur genocide narrative, Brunelle-Duceppe attends URAP rallies on Parliament Hill, along with other Bloc-Québécois MPs and a few senators. The rage of URAP and its Executive Director Mehmet Tohti was telling, when The Canada Files did a graphic emphasizing how a group funded by a CIA-front hosting protests for a fake issue spearheaded by the USA, is dangerous foreign interference,  Liberal MP Rachel Bendayan (Outremont) and Conservative Senator Leo Housakos (Quebec) also supported a rally by the Canada-Uyghur Parliamentary Friendship Group which was launched by URAP this year (the unofficial one was launched in February 2020).

Bloc-Québécois leader Yves-François Blanchet came out with his usual bluster as he criticized the Trudeau government’s lame diplomatic boycott of the Winter Games. He repeated Brunelle-Duceppe’s call to postpone and move the Games from Beijing. NDP’s Jagmeet Singh reiterated the silly notion that Canadian athletes could be in danger in China, repeating baseless intelligence warnings.  Liberal foreign affairs minister Melanie Joly fueled this narrative of athletes in danger, by claiming that “agents” (ie. intelligence agents) would be sent into China to protect athletes. Given how efficiently CIA agents and assets have been neutralized within China, and given the two spies (Kovrig and Spavor) just got home from China, this is an incredibly foolish claim which only serves to increase tensions.

During this Olympic debate in Parliament, 173 members of the United Nations passed a resolution entitled “Building a peaceful and better world through sport and the Olympic ideal.” The resolution called for a truce and peace during the period of the Games including the week before and the week after the Games. So the international score is 173 versus 6 (including Canada) so far of those for and against the Beijing Games.

The BQ is not known for its foray into geopolitics, but when it ventures into Global Affairs, their target is China.  Mainstream Quebec nationalist parties seem to have a tradition of Sinophobia.

There was André Boisclair, ex-leader of the PQ with the “slanty eyes” comment. Then, there was Québec Solidaire’s famous slur calling Chinese farmers “predators.” The BQ has another Sinophobic MP, Stéphane Bergeron (Montarville), who is a member and Vice-Chair of the House Standing Committee on Foreign Affairs and International Development.

He was the vice-Chair of the anti-China House of Commons Special Committee on Canada-China Relations. On December 13, in the foreign affairs committee, Bergeron railed against the Conservatives for not continuing the special China subcommittee, as they instead started a special committee on Afghanistan. His obsession with China seems only to grow with time.

Bergeron has spoken several times to denounce China in relation to the usual fallacious issues of Xinjiang, Hong Kong, Tibet, Taiwan as well as banning Huawei. Bergeron’s subcommittee was instrumental for the House Resolution calling the Chinese government a genocidal regime.

In the previous parliament, Brunelle-Duceppe sat on the House Subcommittee on Human Rights which has also taken Sinophobic stands. They are both starting to make noise on China and to feed the Sinophobic hysteria in Quebec.

The Bloc-Québécois has been getting a free ride on international affairs. However, when a close look is applied to their stances on foreign policy, they line up with the reactionary right, à la the US State Department and their various funded organizations like the World Uyghur Congress and the Canada-based, National Endowment for Democracy funded “Uyghur Rights Action Project”.

However, the Bloc is not alone among mainstream parties, in promoting the dangerous Cold War rhetoric trying to paint China as being extremely vile. The Conservatives, NDPs and Liberals pretty much sing the same chorus in demonizing China. The only difference is who sings the loudest.

William Ging Wee Dere is the author of the award-winning “Being Chinese in Canada, The Struggle for Identity, Redress and Belonging.” (Douglas & McIntyre, 2019). He was a political organizer and a leading activist in the 2-decade movement for redress of the Chinese Head Tax and Exclusion Act.