Canada is in the business of death and destruction too 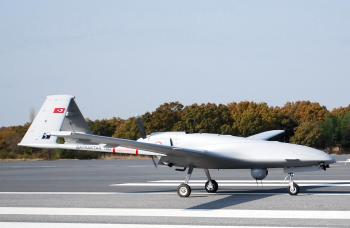 Wescam, the company that produced these high-tech attack drones, is based in Burlington, Ontario. The Canadian firm is a subsidiary of the US company L3Harris. Marc Garneau justified the ban by stating that the use of the drones “was not consistent with Canadian foreign policy, nor end-use assurances given by Turkey.”

This change in government policy was welcome, but it came too late for the six thousand people who lost their lives in Azerbaijan’s offensive against Armenia during the forty-four-day Nagorno-Karabakh War last year. Canadian technology was implicated in many of these deaths.

A week into the war, Azeri president Ilham Aliyev boasted that Turkish drones had helped his country’s forces limit their own casualties during the assault on Nagorno-Karabakh. “These drones show Turkey’s strength. It also empowers us,” he said.

This military power, jointly enabled by the Turkish and Canadian governments, allowed Azeri forces to strike residential neighborhoods with artillery rockets and cluster munitions. According to Human Rights Watch, the onslaught severely damaged the territory’s primary electricity control center, its sole telecommunications provider, a maternity ward, and a school.

This is not the first time that Canada has suspended its arms exports to the region. In September 2020, Canada’s disarmament watchdog Project Ploughshares announced that there was credible evidence of Canadian arms exports to Turkey being used to violate international law. The Canadian government suspended twenty-nine export permits for Wescam’s technology while it investigated whether its clients were using Wescam systems to facilitate such violations.

The watchdog found that Canada’s deal with Turkey violated the international Arms Trade Treaty, as well as Canada’s own Export and Import Permits Act. Canada had flouted its obligations to ensure purchasers of its weapons did not use them to abuse human rights or divert them to third parties for similar purposes.

According to a government report on Canadian arms exports, Turkey was the country’s fourth-largest customer in 2019.

Project Ploughshares later discovered that Azerbaijan was using Wescam sensors in Nagorno-Karabakh. This wasn’t exactly a closely guarded secret: throughout the war, the Turkish and Azeri governments released videos that looked like promotional material from Wescam.

These revelations were especially worrying in the light of Turkey’s track record. As the Project Ploughshare report notes, the Turkish military has been accused of committing “serious breaches of international humanitarian law and other violations, particularly when conducting air strikes.”

Since 2017, Canada has sold $326 million of this technology to Turkey. During that period, Turkey hasn’t just been supporting Azerbaijan in its Nagorno-Karabakh War. The country’s military has also been active in Iraq, Libya, and Syria.

According to Project Ploughshares, Turkey “frantically pressured” the Canadian government to exempt Wescam’s laser-guiding tech from the export ban. Canada had previously imposed sanctions on Turkey after it sent troops into Syria in 2019 to fight against Kurdish forces.

In spite of this ban, Canadian government officials granted Turkey a pass, allowing weapons to slip through the sanctions net. A senior bureaucrat from Canada’s export controls operation division, under questioning from the parliamentary foreign affairs committee, refused to clarify the basis for this exemption. She invoked the principle of “commercial confidentiality” for companies seeking export permits, while acknowledging that Turkey’s status as a fellow NATO member state might have been a factor.

According to a report from Ricochet, a representative of L3Harris met with the Canadian foreign ministry in February 2020. The same month, a representative of the Turkish arms company Baykar met with senior Turkish government bureaucrats. Radio Canada reports that Turkish president Recep Tayyip Erdoğan went on to raise the issue of arms exports when he met Trudeau in April of that year. The following month, Global Affairs Canada approved Wescam’s dispatch of seven imaging and tracking devices, worth $1 million each.

Turkish officials claimed that their military needed Canadian military technology for a humanitarian intervention in Syria’s northwestern Idlib province, and to prevent a possible invasion by the forces of Syrian president Bashar al-Assad.

Leaked internal documents have revealed the grounds on which Turkey based its lobbying. Turkish officials claimed that their military needed Canadian military technology for a humanitarian intervention in Syria’s northwestern Idlib province, and to prevent a possible invasion by the forces of Syrian president Bashar al-Assad.

Trudeau and the Liberals seem to have found this argument compelling. Deputy Foreign Affairs Minister Marta Morgan faithfully parroted the line from Ankara: “Turkey’s military presence in Idlib may help to deter or delay this eventuality and may mitigate the humanitarian costs if a new offensive is launched.”

Turkish officials responded to the recent cancellation of exports by claiming that they don’t really need Canadian technology. But the fact remains that their country has spent $446 million on weapons from Canada since 2014. According to a government report on Canadian arms exports, Turkey was the country’s fourth-largest customer in 2019.

In 2018, the most recent year for which data is available, the Canadian arms industry contributed more than $7 billion in GDP. It accounts for sixty-four thousand jobs, making it one of Canada’s biggest employers. The government’s decision to revoke the arms permits meant going against a powerful vested interest. It only happened because of media scrutiny and grassroots pressure.

The ban on exports to Turkey shows that Canada could actually live up to its self-image as a peacekeeping nation simply by enforcing its own laws. But that will also require a confrontation with the country’s military-industrial complex. There is a lot of money to be made in the business of death and destruction, and a panoply of interests, both economic and military, standing in the way of a genuinely ethical foreign policy.

Jeremy Appel is a reporter at the Sprawl in Calgary. He’s also the cohost of Big Shiny Takes, a podcast that skewers the Canadian pundit class, and Forgotten Corner, an Alberta-focused interview show.