Canada joins the Arms Trade Treaty — but will it cancel the Saudi deal? 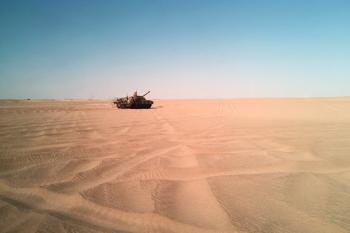 A tank belonging to the Saudi-led coalition is seen in the sand dunes of the Yemeni front line province of Marib September 14, 2015. REUTERS/Noah Browning

On September 17, Canada formally joined the global Arms Trade Treaty (ATT) as the 105th state party to do so, nearly five years after this landmark multilateral treaty entered into force. We applaud this welcome step. But there will be no standing ovation.

Not while Canadian arms exports to Saudi Arabia continue, already 11 months after Prime Minister Justin Trudeau announced that they would be reviewed. And let’s not forget the backdrop to this review: the brutal assassination of journalist Jamal Khashoggi last October, which UN Special Rapporteur on extrajudicial, summary or arbitrary killings Agnes Callamard has described as a “premeditated extrajudicial execution,” for which the state of Saudi Arabia is responsible.

Saudi Arabia is one of the world’s worst violators of human and women’s rights. It is also the chief instigator of the humanitarian crisis and perpetrator of war crimes in Yemen, now enduring its fifth year of armed conflict and on the brink of famine.

Exporting arms to such a recipient is patently incompatible with the ATT, which recognizes that poor regulation of conventional weapons transfers has caused immeasurable death and destruction around the world. To achieve a core purpose of “reducing human suffering,” the ATT sets common global standards for the national control of shipments of conventional weapons across international borders.

In perhaps the most important example, Canada’s foreign minister is now obligated to review the risks that weapons transfers could be used to commit or facilitate serious violations of international humanitarian law, human rights and gender violence as well as the risk to international or regional peace and security. If risks are deemed substantial, the minister is legally bound to deny the transfers.

This crucial new obligation must change Canadian practice. Had this obligation been in place before 2014, the $15-billion order to provide and support armoured vehicles shipments to Saudi Arabia would have been a non-starter.

Canada joins the ATT at a time when international legal standards that are at the treaty’s core are under threat. Human rights protections, prevention of war crimes, and compliance with international obligations like arms embargoes are losing state champions. Worse, many nominally democratic states openly breach international law.

During this national election period, worldwide human suffering compels serious attention. In particular, the conflict in Yemen demands acknowledgement, not only as the world’s worst humanitarian disaster, but as an example of what happens when international legal obligations are ignored.

“Canada’s foreign minister is now obligated to review the risks that weapons transfers could be used to commit or facilitate serious violations of international humanitarian law, human rights and gender violence.”

The latest report by the UN Group of Eminent Experts on Yemen, released at the beginning of September, documents the continuing widespread suffering of Yemen civilians caused by armed conflict. It clearly indicates that Saudi-led coalition forces in Yemen are breaking international law and should be investigated for war crimes.

Importantly, the report directly links the disaster in Yemen to the support provided by external governments to the forces fighting in Yemen. It notes that “the Arms Trade Treaty ... prohibits the authorization of arms transfers with the knowledge that these would be used to commit war crimes” and “observes that the continued supply of weapons to parties involved in the conflict in Yemen perpetuates the conflict and the suffering of the population.”

Canada's accession to the ATT should be about more than a simple strengthening of national export control standards. Canada is the third-largest arms supplier to Saudi Arabia in recent years, as well as a supplier to other Middle Eastern states fighting in Yemen. There may be an economic price to pay to comply with domestic and international arms control regulations. But the human cost of an unregulated arms trade is much higher.

We are well aware of each argument made by Ottawa to maintain these exports: there may be penalties for breaking contracts; Saudi Arabia promotes regional peace and stability; there has been ‘no conclusive evidence’ of misuse; if Canadian companies don’t arm the Saudis, someone else will. And we are not persuaded.

The seriousness of the Yemen crisis, and Canada’s connection to it, demand the attention of all the political parties that could make up Canada’s next parliament. On the occasion of Canada's accession to the ATT, we call on all parties to clearly state how Canada will demonstrate international leadership on arms transfers and the resolution of the Yemen crisis.

To us, such leadership must include the cancellation of arms exports to Saudi Arabia.