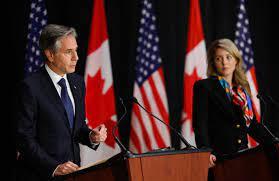 Some draw a parallel between the earthquake of January 12, 2010 and the announcement of sanctions,against a former president and two former Haitian prime ministers, made on Sunday, November 20, 2022 by the Canadian government.

On the political scale, the Canadian earthquake exceeded the magnitude of the January 12 earthquake.

The deadly earthquake of 2010 was not the first natural disaster of its kind in Haiti. The Canadian sanctions, in their scope, are a first. Never in the eventful political history of our country have a former president and two former prime ministers found themselves on the index like Canada has done.

When you add the American sanctions to the Canadian ones, it is a chain of sanctions that devastates the political class. Particularly the one that leads the destinies of the country since the end of the presidency of René Préval.

In less than ten years under their governance, Canada and the USA have created the framework that unites gang leaders, ministers, elected officials, former elected officials - all leaders at the highest level in the lost country that Haiti has become.

According to the information obtained by Le Nouvelliste, Canada will announce more sanctions in the coming days and the United Nations is preparing a large list that will make the application of sanctions against the targeted Haitians worldwide.

It is said in diplomatic circles that the international community will target businessmen, smugglers, and those who finance gangs.

The earthquake of sanctions is accompanied by a political tsunami.

All the groups, all the actors, all the agreements, who for months refused to build a consensus, are affected.

The political class has been decapitated because of its refusal to condemn the gangs, to call for peace, and to support the arrival of a specialized armed force. This is not explained in the preamble of the sanctions, but it is obvious.

The Haitian community had closed its eyes to their corruption. Accepted corruption influence, election frauds, and voilà, are slapped down by the real masters of Haiti.

It is also ironic to note that those who said they wanted a country without foreign intervention in Haitian political affairs allowed violence to persist inside Haiti. Today, they are the same ones who applaud Canada's ultimate form of intervention - sanctions.

That said, for the moment Ariel Henry seems to be the big winner in the situation. But there are no promises he won't be sanctioned as well.

Will Henry be able to apply sanctions against his former allies when the international community asks him to?

Achieving a consensus in Haiti is complicated. these sanctions to not help the matter

Some draw a parallel between the Canadian sanctions and the earthquake of 2010. Others see the probable closure of parenthesis on the 2011-2021  PHTK presidency.