Canada’s aid to Yemen is just a humanitarian band-aid 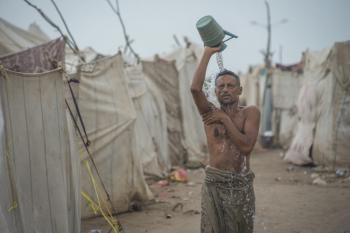 A man, displaced by fighting in the Yemeni city of Hodediah, cools down in the Rabat camp near Aden, July 4, 2019. Photo by EU Civil Protection and Humanitarian Aid/Flickr.

Too often, international “aid” is doled out by the rich and powerful to gloss over global inequities. It’s also a tool employed by Ottawa to present itself as generous while simultaneously sustaining unequal corporate and imperial power structures that benefit Canada.

At a recent pledging event hosted by the United Nations on March 1, the Canadian government earmarked $70 million in humanitarian assistance to Yemen. Touting the Liberals’ “Feminist International Assistance Policy,” Minister of International Development Karina Gould declared, “Yemen is undergoing the world’s worst humanitarian crisis, and its people deserve decisive action. Their suffering must end, and their rights and dignity must be protected. We must do everything possible to make this happen.”

Evidently, however, Canada’s commitment to “investing in peace and stability in Yemen” stops well short of extricating itself from supporting the other side of a conflict that has left over 100,000 Yemenis dead. In response to Gould’s announcement, Rachel Small of the anti-war organization World Beyond War tweeted, “genuinely floored by the hypocrisy. $295 million in aid to Yemen since 2015 is a drop in the bucket compared to $6 billion in weapons Canada exported to Saudi Arabia in the same period. As Karina Gould knows the most important action needed for Yemen is for Canada to stop arming Saudi Arabia.”

According to Statistics Canada data from January, Canadian armoured vehicle sales to Saudi Arabia reached a whopping $487 million, the largest ever monthly total. Between 2016 and 2018, Saudi Arabia purchased over $40 million in Canadian-made rifles and millions of dollars more worth of other armaments. Additionally, Montréal-based flight simulator company CAE has trained Saudi pilots in numerous locales.

In the words of Project Ploughshares researcher Kelsey Gallagher, writing in Jacobin:

Canadian weapons sales are nothing new—the country has sold arms for decades. What is new is the dizzying volume of such exports, and the outsize role they’re playing in some of today’s deadliest conflicts. The Trudeau government has exported more weapons to states accused of war crimes than any other Canadian government on public record.

In a sign of the depraved state of Liberal discourse, Canada’s ambassador to the UN, Bob Rae, simply denies that any of this is happening. He recently claimed, “We don’t sell arms to any of the parties to the conflict” in Yemen. Six months ago Rae responded to a UN report that documented Canada’s role in fuelling the war by labeling Canadian exported armoured vehicles “jeeps.” “It’s not what you’d call a weapon,” he said.

Alongside the weapon deliveries, the Liberals have mostly ignored Saudi violence in Yemen. They have rarely criticized the kingdom’s bombing and when they have, it has been in generally polite terms.

At best, Canada’s aid to Yemen is just a humanitarian band-aid that will provide little relief from a disaster partly enabled by Ottawa’s weapon sales.

A similar dynamic is at play with Canadian aid for international COVID-19 support. In December, Canada put up $485 million to help impoverished nations access treatments and vaccines. Yet Ottawa has hoarded inoculations, having amassed enough to vaccinate the entire Canadian population five times over.

More troublingly, the government has refused to support a World Trade Organization proposal calling for a temporary waiver of certain rules on intellectual property rights to allow poor countries to produce COVID-19 vaccines. The World Health Organization and over 100 countries back the “Waiver from certain provisions of the TRIPS Agreement for the Prevention, Containment and Treatment of COVID-19.”

As covered by Canadian Dimension, Canada and a number of other rich countries have refused to support the initiative, guaranteeing huge profits for Big Pharma at the expense of the Global South. Under mounting pressure over the five-month-old proposal, the Trudeau government now denies it opposes the patent waiver, claiming it simply wants more information about its effectiveness. In the meantime, most poor countries won’t see widespread vaccination until as late as 2024.

Individual aid projects are often helpful (though many are not). Still, progressives shouldn’t spend time calling for more aid. In a just world, transfer payments from wealthier regions to poorer ones would smooth out inequities. But, in the here and now, it is important to be cautious about feeding a worldview that demands “the world needs more Canada.” In practice, this often enables destructive and interventionist policies that uphold the status quo and safeguard corporate profits.

Rather than pushing for more aid, progressives should challenge corporate and imperial power structures. In this vein, activists recently delivered a letter to the prime minister signed by 68 groups, representing one million Canadians, demanding an end to arms sales to Saudi Arabia. Similarly, dozens of groups sent a letter to Trudeau last week calling on Canada to support the temporary waiver of intellectual property patent rights on COVID-19 vaccines.

Beyond specific campaigns, we need social movements and political parties to challenge the arms economy and the upward flow of wealth spurred by intellectual property rights accords and other forms of exploitation.

We need urgently to build a peaceful, fair world where aid is given—not to maintain existing conditions, but to upend them completely.