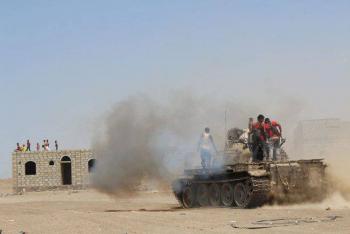 Canada’s export laws have made it far too easy for the federal government to prioritize foreign policy interests and economic gains over human rights, according to a new report by the Senate Committee on Human Rights.

The report says Canada’s Export and Import Permits Act, which was introduced in 1947, doesn’t provide enough checks and balances on a government that “often appears willing to compromise these [human rights] values in order to advance economic and other foreign policy interests.”

The committee’s concerns stemmed largely from last year’s revelation that Saudi-backed troops appeared to be using Canadian-made armoured vehicles to attack civilians in Yemen, where Saudi Arabia has been embroiled in a prolonged proxy war that has left thousands of civilians dead.

The sale of light-armoured vehicles to Saudi Arabia was negotiated by the Conservative government, but Trudeau’s cabinet opted to honour it, granting the export permits in 2016.

Officials said at the time that they couldn’t cancel the deal because the Harper government had already approved it, and because reneging on the deal would mean Canada would be hit with financial penalties.

However, documents from Global Affairs Canada made public in 2016 suggested the government was more concerned about diplomatic and economic relations with Saudi Arabia rather than potential monetary penalties.

Also referenced in the Senate committee’s report was the Bahraini monarchy’s use of Canadian-made web-filtering technology to censor political speech, news and dissident websites.

Bahrain was revealed to have been using technology by Guelph, Ont. firm Netsweeper to control online content — the Gulf Arab country has been wracked by unrest since it violently crushed pro-democracy protests in 2011.

The report recommended that Minister of Foreign Affairs Chrystia Freeland introduce amendments to the Export and Import Permits Act that would require the government to put greater emphasis on human rights concerns in issuing export permits.

It also called on Global Affairs Canada to work with industry and civil society to come up with contractual and monitoring mechanisms to help prevent Canadian-made products and services from ending up in the hands of human rights violators.

“Canada’s commitment to the pursuit of human rights means little if there is no action to back it up. It is time to strengthen the Export and Import Permits Act,” said Sen. Wanda Bernard, chair of the Senate’s human rights committee.

“The government has a responsibility to control the export of Canadian goods and technologies that could be used to violate human rights,” added the committee’s deputy chair Sen. Salma Ataullahjan.

“It is not living up to expectations.”