Canada’s seizure, sale and disbursement of Iranian assets are acts of a hooligan and wrecker of international law 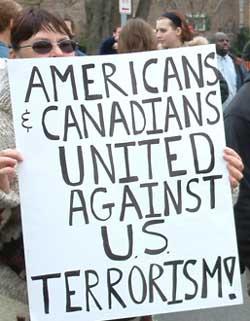 Documents recently filed in the Ontario Superior Court of Justice reveal that some $30 million realized from the seizure and sale of Iranian government assets in Canada have been transferred to American families who filed for compensation under the Justice for Victims of Terrorism Act 2012. Their claim for compensation began in the U.S. court system but extended to Canada when they realized Canada would follow suit. The properties appropriated and sold were the Iranian Cultural Centre in Ottawa and the Centre for Iranian Studies in Toronto. The transfer of funds to the families only came to light last week.

The Justice for Victims of Terrorism Act was passed under the former Harper Conservative government. It was buried in a lengthy omnibus crime bill. Debate in Parliament was limited on the bill, but it is worth noting that the only portion which received all party support was the Justice for Victims of Terrorism Act, and the theft, sale and disbursement of Iranian assets based on this Act were taken under the Trudeau administration.

Under this Act Iran was deemed to be a “state sponsor” of terrorism. The plaintiffs were thus relieved even of any obligation to do anything other than assert that Iran was responsible for the terror attacks that took the lives of their loved ones.

Many countries maintain lists of organizations deemed to be “terrorist”, but there is only one other country in the world which deems countries as “state sponsors of terrorism” — the United States, which along with Israel, is known to be the biggest perpetrator of war and terror around the world. This shows how the raison d’état of Canada as an entity and its foreign policy is integrated into the United States of North American Monopolies.

Iran has a strong case in this respect. Even the Canadian foreign ministry’s director for Middle East affairs Dennis Horak, recently retired, spoke against the Victims of Terror Act, saying it was a “stupid law” that prevented any diplomatic relations with Iran. Not that Canada under the Liberals wanted to normalize relations.

Even more compelling, in March of this year an International Court in Luxembourg rejected a U.S. request to compensate victims of the Twin Tower attacks by seizing assets from Iran, based on an accusation by an American court that Iran was responsible for the 9-11 attack. The Luxembourg court ruled that the U.S. Court decision was not in accordance with public international law. U.S. request fails to meet international law criteria, the court said.

The same argument applies to Canada’s Victims of Terrorism legislation and its seizure, sale and disposal of Iranian assets. Like the U.S. theft of Venezuelan assets or the UK theft of Libyan assets, Canada is establishing a reputation as a hooligan and wrecker of international law and regulations.