Constitutional change and business investment top the U.S. and Canadian agenda in Haiti 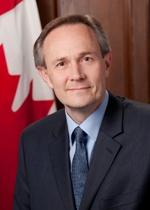 By Roger Annis, published in the Aug 9, 2012 edition of the Haitian print weekly Haiti Liberté (English page) and on Rabble.ca, Aug 9, 2012

Washington and Ottawa have worked closely together over the past decade in Haiti to further mutual goals, ranging from their backing of the 2004 coup d'état against President Jean-Bertrand Aristide to support for key policies of the current government of President Joseph Michel Martelly.

Today, the U.S. and Canada are pushing hard for a Permanent Electoral Council that would further entrench the practices of excluding certain political parties from Haiti's electoral processes, and they are encouraging foreign investors to come to the country, particularly in the domains of mining (in the case of Canada) and assembly industries (the U.S.).

This agenda was broadly outlined by Canada's ambassador to Haiti, Henri Paul Normandin, in a June 28 interview he gave to Haiti's largest daily newspaper, the French-language Le Nouvelliste. The article is titled 'Canada-Haiti relations going well, according to Canada's ambassador in Haiti.'

Ambassador Normandin made clear in the interview that, "Canada and the international community" (code for the Washington-led coalition of North American and European powers) are anxious to see a Permanent Electoral Council installed in Haiti.

This explanation conceals the deep controversy and struggle over President Martelly's recent amendments to Haiti's constitution, which most scholars view as illegal. The issue warrants a brief review.

Martelly's predecessor, President René Préval, drafted with Haiti's 48th Legislature several constitutional amendments in 2009. In June 2012, Martelly published (made legal) what he claimed were Préval's amendments. (The formal procedure for constitutional change prescribed by Haiti's 1987 Constitution is that an outgoing Parliament may vote constitutional changes, but these must, in turn, must be approved by the incoming one.) But many Haitian parliamentarians of the 49th Legislature (whose terms began in May 2011 concurrent with Martelly's five-year presidential mandate) object that Martelly added or changed amendments, not publishing the 48th Legislature's changes faithfully.

Many legal experts have denounced what they term the illegality of how Martelly (with U.S. backing) has changed the Constitution. The controversial changes would allow the U.S. and Martelly's right-wing political sector to keep control of Haiti's elections (and exclude challenges from progressive sectors like Aristide's Fanmi Lavalas party) for years to come.

One amendment permits the appointment of a permanent electoral council (CEP). The 1987 constitution of Haiti spells out a democratic and representative procedure for establishing a permanent council through the holding of nationwide popular assemblies (ASECs) to nominate and elect candidates. Unfortunately, no government implemented these provisions; since 1987, the country has been through one provisional electoral council after another.

The published 2012 amendment sets out a process whereby Haiti's three governmental branches – executive, parliamentary, and judicial – submit nominees to the president and Parliament for approval. The process has quickly bogged down.

The three nominations from the judiciary, given to President Martelly by the head of the newly-minted Conseil Supérieur du Pouvoir Judiciaire (CSJP, or Supreme Judicial Council), are being hotly challenged, including by the president of the Association nationale des magistrats haïtiens (National Association of Haitian Magistrates), the Justice Commission of the Chamber of Deputies (lower house of the Haitian Parliament), and a number of Haiti's current 20 senators (there are 10 vacant seats in the Senate awaiting an election call).

There are enough senators to prevent the necessary quorum of 16 each time these nominations come up for discussion and approval. An even deeper confrontation looms if the blockage over appointments continues and if Martelly does not agree to a compromise provisional electoral council, as some senators have proposed. Some observers go as far as to speculate that Martelly could dissolve the Senate and convene an election to replace it if it does not bend to his will.

Another amendment removes Parliament's power to approve the nomination of Haiti's prime minister by the president. The constitution requires the president to select a nominee from the majority party in Parliament. Under the amended Constitution, in the absence of such a majority, the president must merely "consult" with the heads of the Senate and Chamber of Deputies, but there is no ratification brake. Critics charge that "consultation" is too vague a term and will allow a President to simply choose whomever he wants, as Martelly attempted twice (but Parliament blocked) in 2011.

Through the reported widespread bribery of legislators, Martelly finally got "his man" – Laurent Lamothe – as Prime Minister after the U.S.-favored prime minister, Garry Conille, quit the post on Feb. 24, 2012. (Martelly and his parliamentary supporters effectively made it impossible for him to perform his functions.)

Martelly has taken many unilateral executive actions since coming to power, including the illegal levying of taxes on money transfers and international phone calls, and the ousting nationwide of municipal government representatives, whom he replaced with his own appointees. The terms of mayors and other local officials had expired, and in the political chaos that has reigned since the earthquake, successive governments failed to organize timely elections to replace them.

Ambassador Normandin explained Canada's support for President Michel Martelly's "Open for business" economic policy that places investment in sweatshop labor industries at the center of its outlook for Haiti's future. "I think the policy of the Martelly-Lamothe government to favor commerce and investment is entirely pertinent for economic development in Haiti," he said.

"Open for Business" also dominates Martelly's housing policy, such as it is. An April 30, 2012 government strategy paper says that housing needs in Haiti will only be met by "families and the private sector."

Coincidentally, the ambassador inadvertently corrects the mistaken numbers for Canadian aid to Haiti that were universally presented in Canadian press in the months following the earthquake. (Ironically, these false numbers were then echoed by federal government ministers.) Media reported that Canada had pledged or spent "one billion dollars" in earthquake aid. But as the ambassador explains in the interview, Canada has "spent around one billion dollars in Haiti during the past six years."

Asked to explain Canada's principal aid programs, Ambassador Normandin began by explaining a list of areas in which the Canadian government is providing assistance — health care, education, food security, police and security. He provided only one specific example: assistance to a group of farmers growing market vegetables. He said this is a program in collaboration with Argentina.

He also mentioned the "START" program which finances "justice and security."

The ambassador noted that in addition to direct government programs, the Canadian International Development Agency (CIDA) funds a large number of projects in Haiti.

Canada's feature projects, said the ambassador, include the "re-housing" of the people and families who were relocated from the internally displaced persons camp in the Champ de Mars square in central Port au Prince. Canada financed that program with $20 million. It is intended to also assist small businesspeople in relocating and otherwise continuing their businesses. (The program was also to assist the construction of housing; it is not known exactly how many new houses, if any, were built.)

Le Nouvelliste noted that Canada has financed the repair or construction of police stations across the country, but it has not pronounced on the subject of Martelly's desire to re-found a Haitian army. "To re-establish or not a Haitian army is a sovereign decision of the Haitian government," said the ambassador. "For our part, our efforts will continue to be focused on the police, because it (the institution) is already there. We need to continue to reinforce its capacity to provide security to the population. That's our major contribution."

The interview began with a question about Canada's family reunification program. The Nouvelliste interviewer voiced the widespread concern in Haiti that the program has never matched its fine words. (A proposed, U.S. family reunification program championed by Steve Forester, the Miami-based Immigration Policy Coordinator for the Institute for Justice and Democracy in Haiti, has been shamefully ignored and kept up on blocks by the Obama administration.)

The ambassador acknowledged that it was going "perhaps slower" than initially expected. But he said on a hopeful note: "The program continues, is meeting its goals, or they will be completed, even."

Major media in Canada looked at this issue one year following the earthquake and found it grossly disappointing. A two-article series in the Ottawa Citizen in February 2011 found that the reunification program was deceptive. Only 50% of applicants were accepted (compared to an 83% acceptance rate for all applicants and 88% for applicants from European countries).

Marjorie Villefranche of Maison d'Haïti, a Montreal community service agency, said the rejection rate was high because federal officials were making few concessions to the situation in Haiti. "They have been acting as if there had been no earthquake at all. ... There has been a real lack of humanity" in the way the program has been administered, she told the Citizen.

The number of temporary visas granted to Haitians in 2010 was actually down from the preceding year. On the two-year anniversary of the earthquake, Canadian immigration attorney David Cohen wrote, "Citizenship and Immigration Canada enacted an unprecedented plan to expedite Permanent Residency processing for thousands of Haitians waiting to receive word of their applications. Unfortunately, though this plan held the promise of reuniting countless families stricken by tragedy, it has failed to fully deliver on this promise."

By all evidence, family reunification for Haitians is becoming a forgotten and ignored subject in Canada.

The interview with the ambassador opened on an interesting note. Referring to massive student strikes and protests that have shaken the province of Quebec to its foundation for the past six months, Frantz Duval of Le Nouvelliste began by saying, "For once, the protests are happening in your country (instead of ours)..."

The ambassador replied, "Ah yes, the demonstrations!... We are hoping that this will all finish to everyone's satisfaction."

One month following the interview with Ambassador Normandin, Quebec is in complete turmoil. An election has been called for Sept. 4 in which Premier Jean Charest says the main objective is to get the student movement to shut up and accept proposed, steep increases (82% over seven years) in university tuition fees. Student protests and picket lines are anticipated upon the resumption of the school year later in August. The school year was suspended in May by the draconian Law 78 in May. It obliges students and anyone else in the province to obtain permission from police before staging demonstrations for their rights.

University professors are resisting pressures from the government to be used as pawns in its battle with the students.

One writer, Professor John Conway, head of the Sociology Department at the University of Regina, has termed the situation in Quebec, "a society at war with its children." In many ways, that war parallels the one that the governments and ruling classes of Canada and the U.S. are waging against the Haitian people through their incessant meddling in Haiti's sovereign affairs.