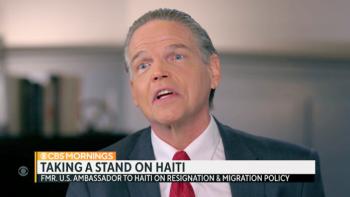 Daniel Foote on CBS TV on Nov. 5. He is not really a “renegade” diplomat who has seen the light. He is advancing a U.S. State Department agenda.

Daniel Foote is a supposed renegade of the U.S. State Department. He resigned his post as the Special Envoy to Haiti on Sep. 23, purportedly due to his disapproval of the way the Biden Administration brutally handled the Haitian migrants under the bridge in Del Rio, TX. He also made statements condemning U.S. policy in Haiti over recent decades, saying “this cycle of international political interventions in Haiti has consistently produced catastrophic results.”

“Our political interventions have never worked,” he later told the U.S. House Foreign Affairs Committee.“We have always prioritized stability, which is critical, over going after the root causes of instability.”

His remarks sparked euphoria among some of Haiti’s liberal and leftist activists. “I heard words I never thought I would hear from an American government official,” gushed filmmaker Raoul Peck, whose four-part series “Exterminate All the Brutes” – an historical critique of colonialism, slavery, genocide, and capitalism – was release this year by HBO.

Saying that Foote spoke “powerfully and undiplomatically” and noting that the diplomat said “I feel responsible,” Peck continued: “For people like me… these admissions were shattering and redemptive. It felt as though one U.S. envoy had restored some measure of honor to decades of shameless American intervention in my country. He spoke words that finally reconcile with Haitian reality.”

But these are more than just the intemperate compliments of a lone filmmaker. Peck is one of the guiding lights – perhaps even the éminence grise – behind the Commission for the Search for a Haitian-led Solution to the Crisis (CRSHC), initiator of the Montana Accord signed Aug. 30 at Pétionville’s Montana Hotel, which includes leading figures of Haiti’s right and left.

In recent days, the “renegade” Foote has been making the rounds of the major U.S. media outlets, giving feature interviews to CBS News (Nov. 5) and MSNBC (Nov. 8), as well as to Haitian media like Zoom Haiti News (Nov. 12). The centerpiece of all these interviews are Foote’s two principal recommendations: 1) recognize the “civil society” front (CRSHC) instead of CORE Group-imposed Prime Minister Ariel Henry’s front, and 2) send U.S. Special Forces to Haiti to train the Haitian police in how to battle the “gangs,” and by this he primarily means the Revolutionary Forces of the G9 Family and Allies (FRG9).

In fact, it can be deduced without fear of error, that Foote is not really a “renegade” or “rogue” diplomat who has seen the light. (He wouldn’t be getting those interviews; he’d be fired and under merciless attack.) Anyone with a lick of common or historical sense will suspect that he is, in fact, an agent of the U.S. “Deep State” with a mission to sell yet another foreign military intervention to the Haitian people. How to do this? Sell it to Haiti’s liberal “civil society” assembled in the CRSHC, who will then sell the notion to the Haitian people that Washington is “redeemed” (as Peck argues) and supportive of a “Haitian-led” alternative. Foote is simply putting the sugar-coating on the bitter pill of a seventh U.S. military intervention into Haiti in the last century.

FOOTE’S REMARKS SPARKED EUPHORIA AMONG SOME OF HAITI’S LIBERAL AND LEFTIST ACTIVISTS.

This formula – put “liberals” in control and slip in small, elite commando teams to carry out the empire’s warfare – is the hallmark of the Democratic Party wing of the U.S. ruling class. This is how they began their invasion of Vietnam under President John F. Kennedy’s administration in the early 1960s: sending U.S. Green Berets to train the police and army of President Ngô Ðình Diem, whom the CIA later assassinated when he became ineffective. We know the rest. The “targeted” insertion of Special Forces grew and grew over the next decade to become the deployment of over 2,700,000 U.S. troops in a war that raged on until 1975, taking some 58,200 U.S. lives.

This is not the approach of “overpowering force” deployed in“shock and awe” attacks as the Republican Bush presidents, father and son, carried out their wars on Iraq and Afghanistan. It is more along the lines of the sneaky, discrete Special Forces deployment that Bill Clinton made to blow apart Yugoslavia in the war he waged there in the late 1990s, amputating Kosovo from that nation and re-Balkanizing it into five other smaller states of Bosnia and Herzegovina, Macedonia, Montenegro, Serbia, and Slovenia.

Saddest, in this whole alarming scenario, is the conduct of supposed “anti-imperialists” along the lines of Peck, Camille Chalmers of the MPDP and allies Rasin Kan Pèp, AKAO, and KONTRAPEP, the Lavalas Family party of Jean-Bertrand Aristide, popular organizations like MOLEGHAF and Esclaves Revoltés, as well as Petrochallengers like Nou Pap Dòmi, who have all put themselves under the leadership of bourgeois activists like Magalie Comeau Denis, the leader of the pro-coup anti-Aristide No Collective of intellectuals and later Washington-imposed de facto Prime Minister Gérard Latortue’s Culture Minister, and former UN official Monique Clesca, who has made trips to Washington seeking the Biden Administration’s benediction. (Many others in CRSHC’s leadership also supported the 2004 coup against Aristide, which is not an auspicious sign and perhaps why Pitit Dessalines’ Moïse Jean-Charles has eschewed the front.)

Today’s gambit is very similar to the approach Bill Clinton employed when returning Jean-Bertrand Aristide to power in 1994. Aristide became the legitimizing shield for the deployment of U.S. troops which aimed, not to stop Raoul Cédras’ coup d’état, but to thwart a revolution which was brewing among Haiti’s people. They put Aristide in a glass box, had him sign-off on a neo-liberal structural adjustment plan of privatizing Haiti’s state industries (in fact, the CRSHC’s Leslie Voltaire was the guy Aristide sent to Paris to do so), and tried to engineer the political make-over of Toto Constant’s FRAPH death squad as a “political party” which would compete in elections with the Lavalas. Meanwhile, the invading U.S. troops stole from FRAPH headquarters 60,000 internal documents, whisked them from Haiti, refusing to return them and preventing the prosecution of human rights crimes, and even protected guys like former dictator Prosper Avril from the Haitian police when they sought to arrest him as a suspect in the killing of Deputy Hubert Feuillé, enraging Aristide.

(Aristide tried to double-cross Clinton by dragging his feet on privatization, even publicly dressing down U.S. Ambassador William Swing and UN Chief Lakhdar Brahimi in the Port-au-Prince cathedral in November 1995. But the empire quickly sent him packing, replacing him with René Préval, who grudgingly carried out the privatizations.)

In this sense, the CRSHC may end up being “more royalist than the king,” in trying to prove to Papa Biden how willing they are to cooperate with Washington.

But just this week, the CRSHC’s Jacques Ted Saint-Dic declared to Le Nouvelliste that the group is “neither for nor against the resignation” of Ariel Henry.

“We cannot install a new disorder in the country,” Saint-Dic said to Le Nouvelliste. “We have to find a political negotiation on how this should be done. In order and discipline.”

“As Foote has urged, it is time for the United States to reset its policy toward Haiti and listen to the voices of Haitians trying to rebuild democracy,” wrote Peck. “We are fighting for our lives and for the ideals the United States has long espoused but failed to deliver.”

Peck’s foolish notion is that somehow U.S. imperialism can reform itself. The same Biden Administration is carrying out merciless wars against Venezuela, Cuba, Nicaragua, Iran, Yemen, Syria, and countless other countries around the world.

THE CRSHC MAY END UP BEING “MORE ROYALIST THAN THE KING”

This is the kind of fake “rupture” our “progressive” bourgeois and petit-bourgeois politicians have in store for Haiti. And their biggest enemy will not be the PHTK and its allies like Youri Latortue or Joseph Lambert, who have yet to join their coalition. It will be the exploited and oppressed masses, Frantz Fanon’s wretched of the earth, who today propose a real alternative of rupture, a revolution. This is why the masses of the “ghettos” have never been and never will be invited to sit down at their tables. They are from the wrong class, the dangerous class, which has the wrong approach to solve the socio-political crisis.

Does the CRSHC agree with Foote’s proposal to have U.S. Special Forces train (and even lead) a Haitian police unit to neutralize the “gangs”? Already we know that much of the Haitian bourgeois and U.S. mainstream media conflate the criminal gangs like 400 Mawozo, Tilapli’s Grand Ravine, and Izo’s Village de Dieu with the anti-kidnapping neighborhood organizations presently grouped in the FRG9. Judging from the media’s focus in recent weeks, the FRG9’s Jimmy “Barbecue” Cherizier is considered a much bigger danger than 400 Mawozo’s Wilson “Lanmò Sanjou” Joseph, even though the latter is still holding 17 missionaries hostage for $17 million. Is it not foreseeable that Cherizier (who is targeted by U.S. Magnitsky Sanctions) would then be their principal target to “take out”? This is the kind of popular decapitation that Washington’s Operation Phoenix carried out in Vietnam some 50 years ago.

The Haitian people must realize that we are entering a new era of struggle, where even leaders posturing as “progressive” and who were once trusted, are now, through opportunism, cynicism, or naivete, aligning themselves behind the empire’s wolves in sheep’s clothing.