The dark side of Canada’s role in Haiti 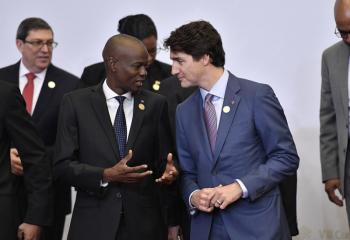 Sunday will be bittersweet for many Haitians. February 7 is usually a day to commemorate the fall of Jean-Claude Duvalier’s dictatorship, whose government was overthrown by a popular uprising in 1986, but this year the date portends the revival of Duvalierism—the fascist ideology that ruled over the Caribbean nation for several decades, and shows few signs of disappearing.

35 years ago tomorrow, a multi-month popular revolt against high unemployment, poor living conditions, and a lack of political freedom, sent “Baby Doc” Duvalier, who took over from his father, François Duvalier, at the age of 19, fleeing from the country after more than 15 years in charge.

Today, a Duvalierist president who should be leaving office is extending his term against the wishes of most Haitians and constitutional experts. During his time in office, Jovenel Moïse has restored many aspects of the brutal regime carried out by his forebears. Moïse has suppressed popular protests and instigated a gang alliance to instil fear in the slums. He has ruled by decree and criminalized protests as “terrorism” while plunging the country into a constitutional crisis.

Shortly after parliament was disbanded because Moïse failed to hold elections in late 2019, the president selected individuals to rewrite the constitution in flagrant violation of the law. A year later, in November 2020, Moïse unilaterally decreed the creation of a new National Intelligence Agency with anonymous, legally untouchable officers who, notes journalist Kim Ives, “have the power not just to spy and infiltrate but to arrest anybody engaged in ‘subversive’ acts or [those] threatening ‘state security,’ i.e. the power of President Jovenel Moïse.” The agency may become analogous to Duvalier’s feared Volontaires de la Sécurité Nationale (Tontons Macoutes), a violent political paramilitary force whose ranks swelled to some 15,000 men in the mid-1980s.

Moïse is the hand-picked successor of Michel Martelly. A supporter of the 1991 and 2004 coups against elected president Jean-Bertrand Aristide, Martelly was a member of the Tonton Macoutes. As president, Martelly surrounded himself with former Duvalierists and death squad leaders who’d been arrested for rape, murder, kidnapping and drug trafficking. When Jean-Claude Duvalier returned to Haiti after 25 years, Martelly told the New York Times no one wanted him prosecuted except for “certain institutions and governments” abroad.

In fact, Martelly was put in place not long after the deadly 2010 earthquake claimed the lives of more than 250,000 Haitians. In the election that year, Washington and Ottawa intervened to help bring Martelly to power (with about 16 percent of the votes, since the election was largely boycotted). For its part, Canada put up $6 million for elections that excluded Fanmi Lavalas, a popular social-democratic political party, from participating. After the first round, Canadian representatives on an Organization of American States mission helped force Jude Celestin, a candidate the electoral council had in second place, out of the runoff.

Ottawa backed Martelly diplomatically and financially throughout his presidency, including when he sought to ensure a relatively obscure businessman replaced him. Since then, Canada has provided almost unquestioned support for Moïse. Ottawa has also ploughed tens of millions of dollars into the Haitian police and prison system in recent years, while promoting a police force that violently repressed anti-Moïse protests.

Indeed, the ghosts of dictators “Papa Doc” and “Baby Doc” Duvalier still haunt Haiti, yet Canada seems willing to support a return of their methods in the Caribbean nation.

It may be hard to imagine that Ottawa would promote the revival of such a notorious dictatorship. But it shouldn’t be. Ottawa enabled a young Jean-Claude Duvalier to take over after his father died, and Canada was among the leading financial contributors to Haiti throughout his 15-year rule. Moreover, Canadian aid supported the dictatorship. In “Canadian Development Assistance to Haiti: An Independent Study,” a 1984 report by the North South Institute, Canada’s first independent policy research institution dedicated to international development, Edward Philip English writes:

It would be naive to pretend that this aid does not contribute to the support of the existing regime, at least in the short-run. It helps to legitimize the regime in the eyes of Haitians by demonstrating international approval and it generates projects and jobs, which the regime is careful to associate with itself as much as possible.

English adds, “CIDA [Canadian International Development Agency] has placed Canadian advisors as ‘experts’ in several Haitian ministries.” In Spy Wars: Espionage and Canada from Gouzenko to Glasnost, historians David Stafford and Jack Granatstein describe one of the individuals leading the CIDA program: “[Hugh] Hambleton lived in true grandeur in the capital, Port-au-Prince, working closely with officials of the notoriously corrupt and brutal government of its dictator, ‘Baby Doc’ Jean-Claude Duvalier.” Canadian officials even influenced who Duvalier appointed as his finance minister. Three days before he was forced to flee the country, Québec Premier Robert Bourassa refused to comment on whether Prime Minister Brian Mulroney should seek the dictator’s exclusion from an upcoming Summit of the Francophonie.

Ottawa was even more openly supportive of maintaining ‘Duvalierism without Duvalier’ after the young dictator fell. In the four years after Duvalier fled the country for France (with assistance from the US), Canada provided significant assistance to a series of military-led regimes. In November 1986, External Relations Minister Monique Landry visited Haiti to meet government head General Henri Namphy. Canada announced $80 million in assistance over five years and Landry also invited Namphy to the Summit of the Francophonie in Québec City the next year. As the violent, anti-democratic nature of the military regime became undeniable, Ottawa resisted shifting gears. In the face of significant criticism from the Haitian community and the Québec left, the Canadian government largely maintained its various forms of support to the military regimes.

35 years later, not much has changed. After forcing Duvalier out, Haitians struggling for a more just and democratic society face a similar predicament. They not only have to contend with the power of their own ruling elite, but they are also up against Canada and the US.

Canadians of conscience should support those mobilizing in Haiti today against creeping Duvalierism. It is the least we can do to make up for the shameful role this country has played in that impoverished nation.

Please take a moment to email new Foreign Minister Marc Garneau to call on Ottawa to stop supporting president Jovenel Moïse, who is reviving the spectre of the brutal Duvalier dictatorship.