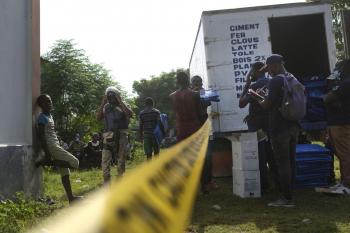 Aid trucks movements are safer this week from the Haitian capital of Port-au-Prince to areas destroyed by last week’s earthquake thanks to a gang leader calling a truce to help relief efforts.

Aid to the earthquake-battered communities in the island’s Southwest has mostly been transported by air due to security concerns as gang violence has flared in the outskirts of Haiti’s capital and prevented national and international efforts to transport essential supplies.

All ground transport seeking to reach the affected areas must travel along a highway that passes through the gang-ravaged Martissant neighbourhood west of Port-au-Prince.

Jimmy Cherizier, who goes by the name “Barbecue” and is a leader of the G9 Revolutionary Forces gang, told Al Jazeera peace had broken out in Martissant and aid was being allowed to flow.

“We know actually that the victims need water, need food, that they need sanitary kits.”

“Do your best to help. Your help will be very appreciated. What we want is to help our brothers and sisters that are in a very difficult situation after the earthquake, that’s why we say, ‘better to give little than nothing,’” he said.

The neighbourhood has been a bloody battleground between two rivals, the Ti Lapli and the Krisla gangs.  But last Friday, Prime Minister Ariel Henry told Al Jazeera the situation had improved after the gangs called a truce to let aid pass through. Al Jazeera producer Jeremy Dupin confirmed this development when he spoke to Cherizier.

At the same time, the US Agency for International Development (USAID) and other organisations partners are urgently working to distribute aid to people in need of assistance. The UN World Food Program (WFP) is transporting 830 metric tonnes of USAID food supplies – enough to feed more than 62,000 people for one month – from Port-au-Prince and distributing it to affected areas.

Tim Callaghan, USAID Assistance Response Team leader, told Al Jazeera planning, coordination and the ‘last mile distribution’ of aid into the earthquake zone were currently underway. This last step in getting aid to affected people can prove to be difficult.

“If you show up with a truckload of food and you don’t have a plan; you haven’t coordinated that with the local authorities and the local police, you can see some things where people will surround the truck, because again, what I’ve seen so far is that most people just want help. They want it quickly,” said Callaghan.

Al Jazeera was on hand to witness as aid trucks travelled through Martissant, and traffic began to flow in a way the area hasn’t seen in months.

Those trucks are bringing aid that is desperately needed by earthquake survivors living in the small towns nestled deep in the mountains of the Tiburon peninsula.

In the department of Grand’Anse, near the town of Duchity, about 100 farmers are living alongside a highway in slender tents constructed with wooden poles and bedsheets. The devastating quake destroyed their homes, crops, and the deep concrete-lined holes used to collect and store rainwater.

Evelya Michele, a mother of five living in the encampment, said, “we are here with our children; I don’t know how many, but we need to feed them, we need food, water, dress. They are crying because they are hungry and thirsty. We need medication, and now we use this place as a shelter, then we really need help to feed our children ourselves.”