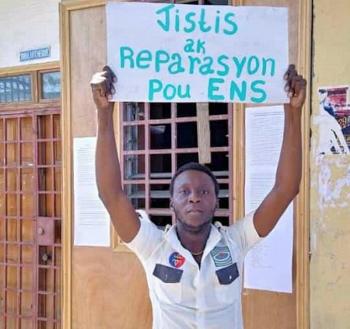 Student activist Gregory “Greg” Saint-Hilaire was shot three times in the back by National Palace policemen on Oct. 2, but no arrests of the killer(s) have been made.

One or more policemen with Haiti’s Presidential Guard shot in the back college student Grégory Saint Hilaire, 29, according to witnesses on the afternoon of Fri., Oct. 2, 2020. He died in a Port-au-Prince hospital several hours later.

The killing ignited ferocious protests during five days last week, in which a courthouse and several state and private vehicles were burned.

Saint Hilaire and other former students of Port-au-Prince’s teachers college (École Normale Supérieure or ENS) had been protesting in recent weeks because Haiti’s Education Ministry had promised jobs and internships to graduating students but had not delivered. Saint Hilaire had graduated from ENS in 2018 and was in his second year at Haiti’s state law school (Faculté de Droit et Sciences Économiques).

On the day of the shooting at the ENS (located on Rue Monseigneur Guilloux, not far from the National Palace), former students had met with university officials and demonstrated to demand the promised jobs. Agents of the Unit for the General Security of the National Palace (USGPN) intervened and fired tear-gas and live rounds to disperse the demonstrators. The students briefly took refuge in the ENS but then tried to leave the school grounds.

“Another group of agents were waiting for us at the gate,” Saint Hilaire’s friend Jean Ronald Olicier told the Voice of America (VOA). “While we were exiting, they shot Gregory in the back. After the bullet hit his spine, they kept shooting and firing tear gas, preventing us from taking him to the hospital.”

Saint Hilaire, shot in the back with three bullets, lay bleeding on the ground for over three hours. Fellow students eventually carried him on a table to the nearby State General Hospital. No doctor was available there, however. A radio journalist volunteered to drive Saint Hilaire across town to the Bernard Mevs hospital, where he died shortly after arrival.

The killing set off an eruption of anger against the government of President Jovenel Moïse, whose resignation has already been demanded by dozens of regular, massive street demonstrations over the past 26 months, despite a hiatus since the Covid-19 pandemic.

During last week’s demonstrations, a courthouse and vehicles were burned, while at least one person was killed and several wounded by police gunfire.

“We’re not protesting because we believe we will get justice,” Oldenson Saint Pierre, a medical student at the State University, told VOA Creole. “We’re out here because we know this government only responds to violence. They only understand burning tires, damage to cars, so if that is what they understand, we are ready to use those means to make sure our message is heard.”

Students were outraged not only by the government’s false promises as Haiti’s economy and educational system continue to spiral downwards, but by the killing on university grounds which are supposed to be a sanctuary from police violence.

“This is the first time in our history that a student has been executed on the premises of a faculty while claiming his right to work and life,” wrote Sonet Saint-Louis, a former ENS graduate and current professor of constitutional law at the Faculty of Law and Economic Sciences. “We have just violated a sacred place of knowledge.”

Gregory “Greg” Saint Hilaire had grown up in one of the capital’s poorest and most violence-plagued slums, God’s Village (Village de Dieu). But he had excelled in school and been the president of ENS’s Student Council.

“In one of the protest signs, which went viral on social media, one reads ‘Down with guns! Long live education!’” wrote Andalasse Mertilus, also a former ENS Student Council president, in an open letter published last week in Haiti Liberté. “You specified that you prefer education instead of the option chosen by the current government; but it is precisely the option you rejected that was used against your dreams. I ask FORGIVENESS for your assassins.”

Set back on his heels once again, Jovenel Moïse took to Twitter and Facebook to call for calm. “The death of student Gregory Saint-Hilaire sparks indignation in all of us,” he tweeted on Oct. 4. “I reaffirm my faith in the right of every citizen to life. My sympathies and regrets to the family. An investigation is under way to shed light on this death which is one too many.”

But Moïse continued with a veiled threat in a video posted on his Facebook page: “Let’s take advantage of this opportunity to embrace calmness because I have to tell you – [repeating] the same actions will produce the same results.”

Meanwhile on Oct. 10, the State University’s Rectorate put out a note saying that on Oct. 5 and 6, it had been “the object of new attacks by a dozen individuals on motorcycles, including students clearly identified as having been expelled from the UEH [State University] and others claiming the status of students.”

The note called for “vigilance to avoid confusing delinquency and militancy, but also to prevent impostors from blurring the lines… The death of Grégory Saint-Hilaire should not be used as a screen for the settling of personal scores and carrying out acts of vandalism which have so far remained unpunished.”

Such posturing has not assuaged nor intimidated either Saint Hilaire’s comrades or his family. Already many students and lawyers were mobilized to demand answers and justice for the Aug. 28 murder of law professor and head of the Port-au-Prince Bar Association Monferrier Dorval at his home in Pèlerin 5. That high profile killing has taken months to make little headway, with seven men accused in the crime. Many expect the government and police to slow-walk their response to Saint-Hilaire’s killing.

“I have not heard from any law enforcement officials,” Greg’s grieving father told the VOA. “They have treated my son like a John Doe… This was a planned attack. We want reparations, justice.”