Former Ambassador on Haitian President in March: "Put him aside" and embrace "Prime Minister option" 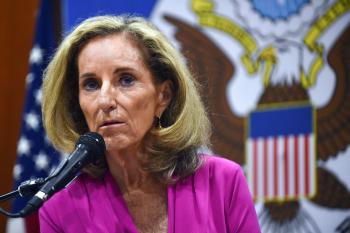 AT A LITTLE-NOTICED House Foreign Affairs Committee hearing in March 2021, headlined “Policy Recommendations on Haiti for the Biden Administration,” a former ambassador to Haiti recommended that the way to deal with troublesome President Jovenel Moïse was to “put him aside” and embrace something she called “the prime minister option.”

The U.S. was unsatisfied with Moïse and, as new elections approached amid a deteriorating on-the-ground situation, wanted a faster transition.

“It would be nice if he would step down, but I do not think that is going to happen,” said former Ambassador Pamela White at the hearing, under questioning from Rep. Ted Deutch, D-Fla. White was a foreign service officer in Haiti from 1985 to 1990, and served as ambassador from 2012 to 2015. “So I think if we sort of put him aside, you know, in the best of all worlds, and we have a prime minister appointed that is noncorrupt, that is not from the political sector, is not from the private sector — there are several really good candidates. I am not going to name them, but there are several.”

White appears to mean “put aside” in the hypothetical sense, discussing the future of Haiti without the former president as an obstacle, but the phrase takes on new meaning given his assassination in July at the hands of Colombian mercenaries alleged to be organized by elements of the Haitian elite. The comments have circulated among Haitians online, heightening suspicion on the island that the U.S. approved of the operation against Moïse.

“No one in their right mind would think I had anything anything to do with his assassination,” White told The Intercept on Wednesday. “I do not want to clarify a statement that was very clear. I have been proven right. Moise was not presidential material. He had totally lost the support [of] the Haitian people. With reason.”

After his predecessor, Jocelerme Privert, left office after less than a year as provisional president, Moïse was sworn in as president in February 2017 for a five-year term. While his opposition maintained he should leave office five years after the previous president left, Moïse argued that the February 2021 expiration of his tenure was premature and that he planned to remain in power until new elections were held.

On July 5, Ariel Henry, a neurosurgeon allied with former President Michel Martelly, was named prime minister by Moïse. Henry, who had moved in and out of government but was most recently on a commission overseeing the country’s Covid-19 response, had previously been a member of the Council of Sages, a group of seven Haitian leaders propped up by the U.S. Two days later, Moïse was gunned down in his bedroom, and Henry began jockeying to become the nation’s de facto leader.

A prosecutor charged with investigating the assassination revealed that immediately after the killing, Henry had had two phone calls with Joseph Badio, a former Haitian justice official accused of having run the operation. The plot’s alleged financier, Rodolphe Jaar, was arrested Friday in the Dominican Republic at the request of the United States. Jaar, a Haitian businessman who had previously been convicted of drug trafficking and served as an informant for the U.S. Drug Enforcement Administration, told the New York Times that he participated in what he thought was a kidnapping, not an assassination, because he was told it had the approval of the United States. “If the U.S. government was involved, then it was safe,” Jaar said, though the Times maintained that “No evidence has emerged” of U.S. government involvement.

As The Intercept reported in July, the Colombian mercenaries who carried out the hit were hired by a Florida-based firm. At least seven of them had received training by the U.S. military.

AT THE MARCH HEARING, after saying that there were several quality candidates for the prime minister position who could take power after the president was “put aside,” White suggested that the next step would be to recreate the country’s electoral council, or CEP, with enough legitimacy to stabilize the government. The CEP has been overseeing elections since the 2004 U.S.-backed coup that ousted Jean Bertrand Aristide, a left-wing proponent of liberation theology who became Haiti’s first democratically elected president in 1991. (After a different coup ousted him later that year, Aristide returned twice to the presidency, from 1994-96 and 2001-04.)

“Then we have this summit that we get to and we put out the old CEP, we have a summit where the actors come back to the table and we discuss how we can get the right representation to inform it to have a CEP that is credible, I mean that is one solution that I can see happening within the very near future,” White said.

White told The Intercept the situation in Haiti has spun out of control, but that she was not involved. “This entire saga is just unbelievable. You have more than enough nefarious characters to investigate. I am not one of them,” she said.

“The problem with transitional governments,” White said at the hearing, “is then we are in that mess again and it slows down everything here. … I wrote a piece, or talked for a piece in the New Yorker, a couple years ago, when I said I think that is exactly what we need. But I think right now we could use the prime minister option.”

White had been responding to a question from Deutch, who argued that no election could be considered legitimate if it was overseen by Moïse. Paradoxically, he suggested the president needed to be removed in defense of democracy. Deutch asked:

Any election or referendum that is overseen by the Moïse administration would automatically be seen by the Haitian people as illegitimate. We have seen on the ground, I have heard, firsthand, human rights groups and opposition leaders maintaining that Moïse’s term ended February 7th and an interim government is necessary to organize elections now. The question, Ambassador White, that I have for you is, if the provisional electoral council cannot meet the standard of being free, fair, and credible, but the current President does not step down, how can Congress and the Biden Administration and the international community play a responsible role in ensuring that any election that is held is credible and legitimate and then facilitating the public acceptance of the results and in mediating between the Moïse administration and the opposition?

White’s response to Deutch was the second time in her testimony that she suggested Moïse should be “put aside,” which buttresses the idea that she was talking about how Haitian politics could unfold in his absence, not necessarily that violently creating his absence ought to be an objective. “It is difficult for me to imagine having successful elections this year in Haiti. Putting aside for the moment the question of, President Moïse should have left in February, or should he leave next February, I do not know the answer, but I do not believe that right now the necessary institutions are in place to assure a smooth transition. The [U.S. government], the OAS, and the U.N. have all stated that Moïse’s term ends in 2022, but several Haitian constitutional experts as well as Harvard, Yale, and NYU law school clinics disagree,” she testified.

“Here are a few quick suggestions,” she said. “If President Moïse will not step down, he should step aside. He must be completely transparent and honest. He must bring relevant actors to the table. A well-respected Haitian should be appointed prime minister. He or she should immediately dissolve the current CEP and call a summit with all relevant political actors to establish a legal CEP.”

IN MID-SEPTEMBER, the Haitian prosecutor revealed the allegations about Henry’s role in the assassination. Henry urged the prosecutor’s boss to fire him; when he refused, Henry fired them both. Less than two weeks later, with the U.S. standing behind Henry, Daniel Foote, the U.S. envoy to Haiti, resigned in protest, citing in part the American willingness to back Henry. In late September, Henry dutifully dissolved the CEP.

In the October 2019 New Yorker interview White referenced in Congress, she expressed similar sentiments. “The Western solution to immediately hold elections in countries that have been controlled for decades by dictators and ruthless militias has never worked and never will,” White said. “We need some creative thinking about how a country with low education and high poverty levels can function in order to provide basic services to its citizens. Elections are so corrupt and the people running so inexperienced that they cannot possibly be considered a good solution. In the best of all worlds, a council of well-educated and experienced Haitians would form a coalition government — it would include business and civil-society representatives — with senior Western advisers.” She added, “A realistic development plan would be detailed so all citizens could see it, with a realistic budget, no big fancy buildings, no fancy cars or lucrative travel budgets. A strong police presence would also be a huge help, especially if they were trained to render real services to the people, not only security. But if anyone thinks another election is going to solve all of Haiti’s woes, they are sadly mistaken.”

As for her comments at the March hearing, White told The Intercept she was speaking only for herself, a point she made at the hearing as well. “Nothing zero that I said has anything to do with US policy. I certainly do not not speak for the Biden Administration,” she said. “I personally wish that right now we (USG)” — the U.S. government — “had the guts to push Henri aside. He is not to be trusted.”