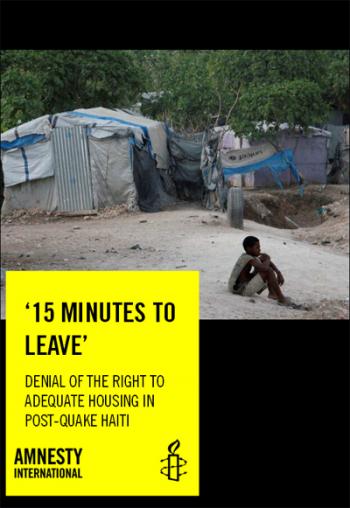 Many people who lost everything in the 2010 earthquake have faced renewed hardship as they are thrown out of their shelters and makeshift camps. Others face homelessness and destitution in the long-term as financial support programmes from international donors begin to dry up.--Chiara Liguori, Caribbean Researcher at Amnesty International

Five years on from a devastating earthquake in Haiti, tens of thousands of people remain homeless as government policy failures, forced evictions and short-term solutions have failed many who lost everything in the disaster, said Amnesty International today.

The new report, '15 minutes to leave' - Denial of the right to adequate housing in post-quake Haiti, documents worrying cases of people being forcibly evicted from  temporary, make-shift camps. The report also explores how the influx of development aid that came in the wake of the disaster failed to be transformed into long-term, secure housing solutions.

“Many people who lost everything in the 2010 earthquake have faced renewed hardship as they are thrown out of their shelters and makeshift camps. Others face homelessness and destitution in the long-term as financial support programmes from international donors begin to dry up,” said Chiara Liguori, Caribbean Researcher at Amnesty International.

“Five years ago the eyes of the world were on Haiti after the devastating earthquake tore lives apart and left more than 2 million people homeless. Sadly, since then the world’s interest has waned while tens of thousands of people remain destitute and homeless.”

According to the latest data, 123 camps for internally displaced people (IDPs) remain open in Haiti, housing 85,432 people. While the number of those in camps has reduced significantly since 2010, more than 22,000 households are still without adequate housing.

Conditions in many IDP camps are dire. A third of all those living in camps do not have access to a latrine. On average 82 people share one toilet.

Forced evictions from camps are a serious and ongoing problem. More than 60,000 people have been forcibly evicted from their shelters in makeshift camps since 2010. The vast majority were not offered any alternative locations where they could resettle, pushing them again into poverty and insecurity.

Amnesty International has documented six cases of forced evictions from IDP camps and informal settlements since April 2013 alone. More than 1,000 families were affected.

Aside from the IDP camps, one of the worst affected areas is the large informal settlement of Canaan, in the northern outskirts of the capital. Between 7 and 10 December 2013, more than 200 families were forcibly evicted from the Canaan sector of Mozayik. Most of the families had moved there after having been previously evicted from an IDP camp in 2012. Further evictions have occurred in Canaan in 2014.

In some instances forced evictions have involved the use of teargas grenades and live-rounds shot into the air by police. Other times groups armed with machetes and sticks have moved in to break up camps, with people assaulted and camps allegedly set on fire. Amnesty International has also recorded instances of young children, pregnant women and elderly people being assaulted during forced evictions.

While the number of documented forced evictions from displacement camps has reduced in 2014 compared to previous years, the government is still failing to prosecute those responsible for these acts. It has also failed to adopt any legislation to prohibit forced evictions.

As a result, forced evictions are continuing on land outside IDP camps and are being used as a means to clear land for reconstruction and infrastructure development projects.

In the wake of the disaster, money and humanitarian aid poured into the country. Some went to setting up rental subsidies programmes, which support IDPs to rent accommodation for one year. However, while these programmes have significantly reduced the number of IDP camps, they cannot be regarded as a long-term and durable solution.

According to Amnesty International’s report, less than 20% of the housing solutions provided could be seen as long-term, or sustainable. Instead most programmes have simply provided temporary measures, for example the construction of T-shelters which are small structures made with light-weight materials, designed to last just three to five years.

“Temporary programmes, while well-intentioned, have been nothing more than a sticking plaster, providing a quick fix instead of long-term development solutions. What really needs to happen now is a roll-out of initiatives which will truly ensure the right to adequate housing to all those made homeless by the earthquake, and all those living in poverty,” said Chiara Liguori.

In the last year, the government has started to consider more durable solutions, such as regularization of camps and access to essential services. In August 2014, the government published the first ever National Housing Policy, providing a framework for future interventions. Amnesty International will be monitoring these steps closely to ensure programmes are in line with Haiti’s international human rights obligations.

Amnesty International is calling on the Haitian government to establish safeguards against forced evictions and to ensure that the housing options being developed are truly accessible and affordable to those most at risk of violation of the right to adequate housing. It also calls on donors and international agencies to ensure that any initiatives they fund or support puts people’s long-term needs and human rights firmly in the centre of all planning.

“In the wake of the disaster there seemed to be a common ambition to finally address seriously the issue of housing in Haiti in a sustainable and comprehensive way. That dream seems to have been long-forgotten. Five years on from the tragedy, now is the time for the government, and international agencies, to renew their commitment and step up to ensure that any reconstruction is done in a way that truly delivers human rights.”