Haiti Is the only country in Western hemisphere without vaccines 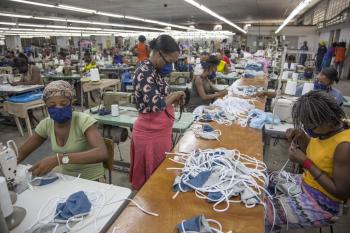 Haiti, the poorest nation in the Western hemisphere, has earned another grim distinction: it’s the only one that hasn’t vaccinated a single resident against Covid-19.

One of a handful of nations worldwide still awaiting vaccines, Haiti was among the 92 poor and middle-income countries offered doses under the Covax Facility. But the government initially declined AstraZeneca PLC shots, citing side effects and widespread fears in the population.

“Haiti did not reject the offer of vaccines from Covax,” Haiti Ministry of Health General Director Laure Adrien said in a telephone interview. “All we asked was that they change the vaccine they were providing us.”

By last month the equation had shifted. Fears about AstraZeneca were subsiding just as Haiti was seeing a surge in cases. When the country finally agreed to receive the doses, production issues in India and a spike in global demand made them unavailable.

The United Nations’ Vaccine Market Dashboard -- which processes information provided by Covax -- has no scheduled delivery date for Haiti. And Adrien said it is unclear when the vaccines will arrive.

The pandemic is just the latest malady to befall the nation of 11.3 million. Haiti has seen months of protests against President Jovenel Moise and a rash of gang violence and kidnappings. Last month, a staff member of Doctors Without Borders, the non-profit that runs several clinics and hospitals in Haiti, was murdered on his way home from work.

Covid, along with the violence, has become one more “huge obstacle” to providing basic health care, said the organization’s mission head, Alessandra Giudiceandrea.

While Haiti has reported 15,435 coronavirus cases and 325 deaths due to Covid-19, the true scope of the problem is obscured by the lack of widespread testing, she said.

“We are seeing a high mortality rate and facilities are overloaded,” she said.

The dearth of vaccines is all the more striking because neighboring Dominican Republic, with which it shares the island of Hispaniola, has vaccinated almost 20% of its population.

Those vaccines are only available to Dominican citizens and documented residents, leaving most of the estimated 750,000 Haitians living there ineligible.

Father Tomas Garcia, with the Fundacion La Merced, a Dominican aid agency, said vaccinating the vulnerable, regardless of their nationality, should be a priority.

Adrien, with the Health Ministry, said it’s unclear which vaccines Haiti might receive first, the Covax doses or ones offered to the region last week by U.S. President Joe Biden.

He also argued that there’s a silver lining to the late arrival of the doses. Many Haitians would have declined a shot before now due to widespread hesitancy and the country is better prepared for the cold storage and distribution requirements, he said.

“I don’t think this late onset of the vaccination program will have any impact on the recovery,” Adrien said. “If we started earlier and had a failure in our vaccine program, it would be the same as if we started now and had our program succeed.”