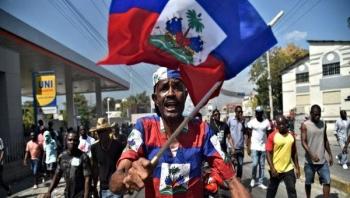 Opposition politicians Sunday rejected the announcement by Haiti's Provisional Electoral Committee (CEP) regarding the holding of a Constitutional referendum and general elections to take place this year.

Haiti in Action party (HA) Coordinator and former Senator Youri Latortue described the electoral process as "unserious" and "absurd" while reiterating the calls on President Jovenel Moise to resign.

"The 50th legislature came to an end in January 2020. The elections were due to take place in October 2020 and a new president must be elected on February 7, 2021," Latortue recalled.

People in the Struggle Organization party (PSO) and the Democratic and Popular Sector (DPS) described the CEP's attempts to establish new political personnel as a comedy while announcing general strikes.

Opposition parties considered invalid the referendum as the 1987 Constitution prohibits its modification through popular consultation. They also advocate for a transitional government for a period of three years to later organize general elections.

The Constitution sets that election day must take place during the next year after the end of a Parliament's legislature. However, in 2018, parliamentary elections could not be held and have been postponed ever since.

On Jan. 7, the CEP announced that a referendum on the Constitution will be held on April 25, while presidential and legislative elections will be held on Sep. 19. Moise has refused to contest the elections, noting his mandate will conclude on February 2021.