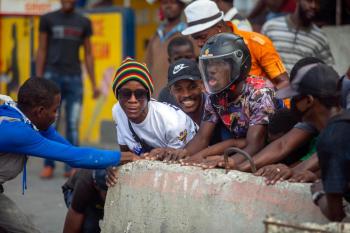 Haiti's President Jovenel Moise says his mandate expires in February 2022, an interpretation of the constitution that has been rejected by the opposition

Haitian government authorities have said they foiled an attempt to overthrow President Jovenel Moise, who is facing mounting anger from opposition leaders and the Haitian public over when his mandate ends.

“I thank my head of security at the palace. The goal of these people was to make an attempt on my life,” said Moise, who was expected to address the nation on Sunday afternoon. “That plan was aborted.”

Earlier in the day, Moise had brushed off criticism from the opposition and human rights groups who say his presidency expires on Sunday.

Moise, who has been governing without any checks on his power for the past year, has insisted his term ends on February 7, 2022 – an interpretation of the country’s constitution that has been rejected by the opposition.

“The next 12 months will be focused on reforming the energy sector, carrying out the referendum and organising elections,” he tweeted on Sunday morning.

Protesters calling for Moise to step down clashed with police in the capital, Port-au-Prince, on Sunday afternoon. Police fired tear gas to disperse the demonstrators.

Meanwhile, top legal experts denounced the detention of the Supreme Court judge. Wilner Morin, president of the National Association of Haitian Magistrates, told local media outlet Ayibopost that it was an “illegal arrest”.

Al Jazeera’s Manuel Rapalo, reporting from Mexico City, said things appear likely to remain tense in Haiti as opposition leaders are asking for the detainees to be freed, including the Supreme Court judge.

“And there are calls for more protests against the president and the opposition has vowed to continue to pressure the government of Jovenel Moise,” Rapalo said.

The dispute over when Moise’s term ends stems from his original election.

He was voted into office in a 2015 poll later cancelled on grounds of fraud, and then elected again a year later, in 2016. But Moise was only sworn into office on February 7, 2017, and he and his supporters say that since his mandate only began on that date, it ends in 2022.

After the latter disputed election, demonstrations demanding his resignation intensified in 2018.

Haiti’s electoral council postponed legislative elections indefinitely in October 2019, Human Rights Watch (HRW) has reported, and Moise has been ruling by decree since January 2020, when the legislature’s mandate expired.

“Moise blamed parliament for the postponement, for failing to approve an electoral law, while his opponents accused him of maneuvers to hijack the process,” HRW said.

The Haitian Bar Federation agreed, adding in a statement shared on social media on Sunday that “the provisional Electoral Council unilaterally appointed by President Jovenel Moise has no legitimacy to organise the next elections”.

Kim Ives, a journalist with Haiti Liberte, told Al Jazeera that most legal analysts and most of the Haitian people agree the president should leave office.

“One thing’s for sure: even if he survives today, [Moise is] going to be faced with huge unrest for the next year,” Ives said.

Meanwhile, about a dozen human rights groups recently accused the United Nations mission in Haiti of providing technical and logistical support for the president’s plans to hold a constitutional reform referendum in April, then presidential and legislative elections later in the year.

“The United Nations must under no circumstances support President Jovenel Moise in his anti-democratic plans,” the groups said in a letter.

The Haitian opposition also expressed anger after the United States this week recognised Moise’s claim to power for another year.

US State Department spokesman Ned Price told reporters on Friday that the US has urged Haiti “to organise free and fair elections so that parliament may resume its rightful role”.

But Price said Washington agrees with the Organization of American States that a new president should succeed Moise “when his term ends on February 7, 2022”.

The chairman of the US House Foreign Affairs Committee, Congressman Gregory Meeks, and US Congresswoman Yvette Clarke urged Secretary of State Antony Blinken to reject Moise’s attempt to retain power.

In a letter on Saturday, the US lawmakers said “the time for a Haitian-led democratic transition is now”.

“Members of the opposition have sent President Moise an unmistakable message that his term must end on February 7. There have also been clear calls for a legitimate transitional government to be promptly established so that democratic elections can resume. The people of Haiti deserve a voice in their own governance, and the United States must extend its own voice to that critical cause,” they wrote.