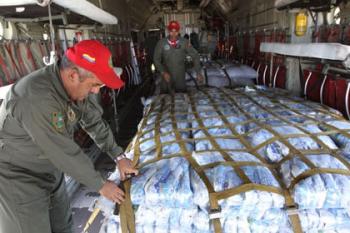 The government of Nicolás Maduro authorized the shipment of 30,000 kilos of non-perishable food and medicines to be sent to the Haitian people, who suffered two earthquakes again last weekend, of 7.2 and 5.4 on the Richter scale. To date, the earthquakes have resulted in 1,410 dead and at least 6,000 injured, according to the AP news agency, in addition to billions of dollars in material and infrastructure losses.

President Maduro reported on the humanitarian shipment on Saturday during the ceremony naming the official PSUV candidates for governors and mayors in the November 21 mega-elections.

Haiti has gone through very hard times for more than 60 years, both at the hands of cruel governments and due to constant foreign intervention and looting. In addition, Haiti suffered a serious earthquake on January 12, 2010, in Port-au-Prince, and recently its president Jovenel Moïse was assassinated. These events compounded various social problems that have left the Caribbean nation among the most internally neglected in the region.

On Sunday night it was reported by the Venezuelan embassy in Haiti that the Conviasa jet carrying the humanitarian aid was already received by Haitian authorities.

Venezuelan authorities also reported to local news outlets that flights will continue to arrive in Haiti and that the Bolivarian Republic will send a team of disaster management experts to the Antillean nation. Venezuela and Cuba are the countries that most Haitians view favorably in terms of providing real humanitarian aid.