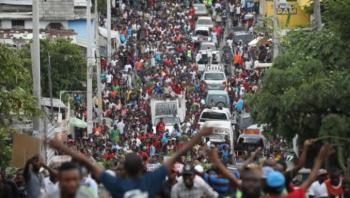 Activists affiliated with unions, including the United Front of Transporters and Workers of Haiti (FUTRAH), have announced a nationwide strike Sept. 26-28, followed by protests Sept. 29-30. The participants will demand the reduction of fuel prices and that acting Prime Minister Ariel Henry steps down. The groups have not confirmed any locations or times for gatherings on Sept. 29-30, but these are likely to occur across several urban centers, especially the capital. While the unions have also not confirmed any plans to protest during the strike from Sept. 26-28, demonstrations remain possible on those days. If the government reaches an agreement with the unions during the strike, the protests Sept. 29-30 may be averted.

The strike and protests are likely to result in significant traffic disruptions nationwide. Protests are likely to take place near government buildings, including those of foreign diplomatic representation, and on primary roads. Officials will likely deploy security forces to manage protests; however, Haitian authorities lack the capabilities to control the situation and monitor all gatherings. Serious clashes and violence involving security forces, protesters, and gangs are possible, especially in Port-au-Prince.

The plans for a strike and protests come following two weeks of widespread demonstrations in response to the government's Sept. 11 announcement regarding the removal of fuel subsidies and further announcements Sept. 14 that fuel prices would almost double. While protests have occurred in several urban centers nationwide, including Cap-Haitien, Gonaives, Petit-Goave, and Jeremie, the largest and most disruptive demonstrations have been reported in Port-au-Prince. Business activities have been seriously impacted in recent days following numerous reports of roadblocks, burning tires, and clashes involving police, protesters, and some civilians traveling near protests.

Roadblocks have been severely impacting overland travel in and around Port-au-Prince, especially in the areas of Delmas, Tabarre, Petionville, and Canape-Vert. Due to widespread protests in the capital, some embassies have fully suspended operations, such as the embassies for France, Canada, and Spain, amid others, while additional diplomatic missions are likely to be operating with limited capabilities. Several local and foreign private businesses have been looted and vandalized during protests in the capital.

The wave of unrest occurs amidst significant political, security, and economic upheaval in Haiti. The country has also been deeply affected by rising prices for imported fuel, food, and other goods, contributing to the frequency of civil unrest. Security personnel are under-resourced and ill-prepared to deal with the rising insecurity.