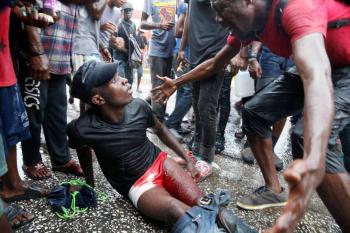 A man cries out over an injured fellow protester after police launched tear gas to disperse demonstrators, who set fires and chanted calls for Haiti’s president to resign, in Port-au-Prince, Haiti, Monday, Sept. 30, 2019. Rebecca Blackwell AP

A meeting in Miami between U.S. House Speaker Nancy Pelosi and some of South Florida’s most prominent Haitian Americans ended Thursday with a message for the Democratic leader to take back to Washington: The U.S. needs to stop meddling in Haiti’s internal affairs — and Haiti President Jovenel Moïse needs to go.

“The people of Haiti are saying, ‘My goodness, let us govern ourselves. Let us find our own path... just support us,’” said Gepsie Metellus, the executive director of Sant La Haitian Neighborhood Center, which provides social services to the community. “What do people want to see? They want to see the United States ask, ‘What do you want and how can we help you get it?’ We don’t want the United States or Canada or France or the rest of our friends dictating. We don’t want to be dictated to.”

“The people of Haiti say, ‘No interference. No [Temporary Protected Status] deportations after Jan. 20, no more support of President Jovenel Moïse as president of Haiti.”

Wilson, who represents one of the largest congressional districts of Haitian Americans, introduced Pelosi at the Father Gerard Jean-Juste Community Center in North Miami-Dade, saying that when she originally invited her, it was to discuss issues affecting the community. Haiti was not yet the powder keg it has become since protests over a recurring fuel shortage morphed into a fresh round of violent protests demanding the resignation of Moïse, who has been in office for 32 months.

On Thursday, a leading human rights group in the country said at least 17 people have been killed and 187 injured, including journalists, between Sept. 16-30.

Accusing anti-riot police officers of engaging in repressive violence, the National Network for the Defense of Human Rights/Réseau National de Défense des Droits Humains is calling for an investigation into the misuse of tear gas and incidents of police brutality by the Haiti National Police.

“The police, an apolitical institution, must be able to behave professionally,” the human rights group said, also criticizing the use of masked police officers during the demonstrations.

The human rights report said some of the individuals have turned out to be fake police officers, hired by the government to quell the anti-government demonstrations. Among the exhibits in the report: a photo showing armed men in uniform escorting the new representative of the executive in the North Department, Pierrot Degaul Augustin, during his installation on Monday.

The National Network for the Defense of Human Rights said the recent insurgency by the population can be blamed on public policies put in place by Haiti’s current authorities “who, since their accession to power, flout the democratic gains of the Haitian people and systematically violate their rights.”

“They have never taken seriously the various protest movements in the country since July 2018 by a population plagued by all ills,” the human rights group said.

Metellus and others on the panel also put the blame on the U.S., saying the U.S. ambassador in Haiti, Michele Sison, was acting like a commander in chief in Haiti and a “cheerleader” of Moïse and not listening to civil society, which has been mobilizing against the corruption of public officials and mismanagement of the economy.

Sison as well as the representative of the United Nations and other foreign embassies have been meeting with business leaders, heads of political parties and activists in hopes of finding a solution to the political crisis that is preventing humanitarian aid from getting to thousands of people because of barricaded roads and lack of security. Also on Thursday, Moïse and his wife, Martine, made a brief visit to Petionville, where he shook hands with the population and told them he was working to address their needs.

“The United States and Ambassador Sison continue to encourage Haiti’s political, economic, and civil society stakeholders to enter into an inclusive dialogue to identify a path to form a functioning government that will serve the Haitian people,” a State Department spokesperson for the Bureau of Western Hemisphere Affairs said. “This process should remain firmly rooted in democracy and the respect for the rule of law, and address the country’s pressing economic and social concerns. We support the Haitian people’s aspirations for a better life. We have reiterated that goal as recently as Deputy Secretary Sullivan’s meeting with Haitian Foreign Minister Edmond on September 26.”

Stephane Dujarric, spokesman for U.N. Secretary-General António Guterres said Thursday the world organization is continuing to follow the situation. The U.N. is scheduled to permanently close its 15-year-old peacekeeping presence in Haiti on Oct. 15.

“The U.N. continues to encourage all actors to refrain from violence, respect human rights, and allow the normal functioning of hospitals and emergency services, as well as the work of the humanitarian actors who are assisting the most vulnerable populations,” Dujarric said.

Wilson opened the discussions with two Haitian American elected officials, Miami Dade County Commissioner Jean Monestime and North Miami Beach Commissioner Michael Joseph. While the two men appeared at a loss on her question on how to help Haiti, the women on the panel — Metellus, Paul and fellow activists Marleine Bastien and Karen Andre — did not mince words.

“The volatile aspect of this crisis goes beyond politics. It goes beyond partisanship. It goes beyond borders and is so dangerous it can destabilize the entire region,” said Andre, a lawyer who formerly worked in the Obama administration. “All I am going to do is repeat what the people have been saying for the last year... Where is the PetroCaribe money?”

Andre’s question has become the chant of anti-grassroots activists in the country, which ignited in June after its Superior Court of Auditors accused the president and others aligned with his PHTK political party of embezzling billions of dollars in savings from the Venezuela PetroCaribe program.

While not making any promises, Pelosi said she had taken note of the panel’s concerns. She said she heard the panelists about wanting Haitians to make their own decisions, and noted that U.S. assistance wasn’t always meddling. The meeting, she said, shined a light on the current situation in Haiti, which hasn’t had much attention.

Pelosi did take issue though with one of the comments, which had to do with Venezuelan leader Nicolas Maduro. Paul remarked that President Trump was supporting Moïse because of the Haitian president’s decision to vote against Maduro.

“Maduro is a thug,” Pelosi replied, adding that Maduro is behind injustices and horrors in Venezuela and she could not condone that. She accused him of “exporting corruption” in the hemisphere, adding, “I cannot let my view of Maduro go unspoken in a group of this kind.”

Wilson said the discussions had given her much to think about.

“We’ve been meeting with people from the diaspora on Haiti, over and over again,” Wilson said. “We have a president of a country who the people feel is corrupt, who the people feel is stealing the money that has been sent there.... They cannot have access to gasoline, so they are protesting in the streets and we have to find a solution to stop the protests or we’ve got to find a way to remove the president. It’s just that simple.”