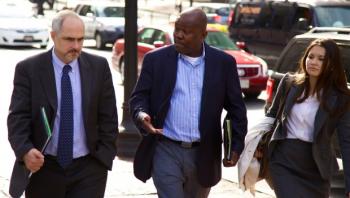 October 9, 2013, New York- Attorneys from the human rights groups Bureau des Avocats Internationaux (BAI) and Institute for Justice and Democracy in Haiti (IJDH), and civil rights law firm Kurzban, Kurzban, Weinger, Tetzelli & Pratt (KKWT), announced today the filing of a class action lawsuit against the United Nations (UN) on behalf of victims of the deadly cholera epidemic in Haiti. Since October 2010, when the UN contaminated Haiti's principal river with cholera-infected human waste, the disease has killed over 8,300, sickened more than 650,000, and continues to kill about 1,000 Haitians per year.

Speaking from Geneva, where he is being honored as a finalist for the Martin Ennals Human Rights Award, BAI Managing Attorney Mario Joseph said: "The filing of this lawsuit marks a critical step towards justice for Haiti and all those who have suffered and are suffering because of cholera." Joseph is co-counsel on the case and has led the fight for justice for cholera victims since 2011.

"The Plaintiffs have undergone indescribable suffering as a result of cholera and have to live with the knowledge that cholera can strike again. They have rights to have a Court hear their case and rights to damages that will help them go on with their lives and access clean water," said Brian Concannon, Jr., Esq., director of IJDH and co-counsel for the plaintiffs.

The 67-page complaint, filed today in federal court in the Southern District of New York, details extensive evidence demonstrating that the UN knew or should have known that its reckless sanitation and waste disposal practices posed a high risk of harm to the population, and that it consciously disregarded that risk, triggering an explosive epidemic. The plaintiffs seek damages for personal injury, wrongful death, emotional distress, loss of use of property and natural resources, and breach of contract.

"We anticipate that the UN will seek to avoid responding to the evidence presented by the victims by arguing that the court does not have jurisdiction to hear the case. We are prepared for that challenge, and are confident that the court will find that the case must proceed because the victims have a recognized right to access courts that must be protected" said Ira Kurzban, Esq., a civil rights litigator with KKWT and co-counsel on the case.

The UN has legal obligations under international treaties to provide people harmed by its operations either compensation or a fair forum to present their claims, but the organization has not complied with this requirement. In November 2011, BAI, IJDH and KKWT filed claims with the UN on behalf of 5,000 Haitian victims of cholera, seeking remedies and the establishment of the commission.

The UN refused to receive the claims in February 2013, claiming that they were "not receivable" because considering them would "require a review of political or policy matters." The UN has come under strong criticism for its handling of the case, which includes denial of responsibility, stonewalling press inquiries, and a refusal to even meet with the cholera victims or their lawyers.

Speaking at the annual Martin Ennals [Human Rights] Award ceremony on Oct 8 in Geneva, Navi Pillay, United Nations High Commissioner for Human Rights, explained that she has supported the call for compensation to the victims of cholera in Haiti. Paying tribute to Mario Joseph, one of the three nominees for the prize this year, Madame Pillay said, "And let me pause here to reflect on some of the work that Mario Joseph has been doing on claiming reparations for victims of cholera in Haiti.  And let me say to you, I have used my voice both inside the United Nations and outside to call for the right…for an investigation by the United Nations, by the country concerned, and I still stand by the call that victims …of those who suffered as a result of that cholera be provided with compensation." [1’37” mark]

*** For more about the cholera case, click here. For more information about BAI and IJDH's work, please visit: www.ijdh.org. A background article to this story appears in the  New York Times on Oct 8, 2013. In Canada, you can contact the Canada Haiti Action Network at 778 858 5179.