Haitians also were Starr-crossed: The Haiti angle in the Clinton sex scandal 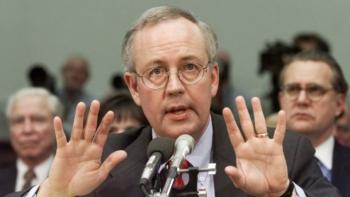 In light of Kenneth Starr’s resurrection as one of Donald Trump’s defense lawyers in the on-going impeachment trial against the U.S. President, we thought it might be instructive to reprint this article (published 22 years ago in Haïti Progrès) outlining Starr’s cynical and unscrupulous tactics towards Haitian refugees in the early 1990s.

In the U.S., all these stories were eclipsed last week as the country’s entire mainstream media became obsessed with a single headline: President Bill Clinton’s sex life.

To recapitulate, the news broke on Jan. 21 that Clinton allegedly entertained an 18-month affair with 24-year-old Monica Lewinsky three years ago when she was an intern at the White House. Lewinsky talked about the affair to Linda Tripp, with whom she worked at the Pentagon in 1996 and 1997. Tripp, 48, who had also worked at the White House under both the Bush and Clinton administrations, secretly recorded her conversations with Lewinsky and on Jan. 12 gave the tapes to Kenneth Starr, the independent counsel who since 1994 has been investigating Clinton’s role in the failed Arkansas real estate venture called Whitewater when he was the governor of Arkansas.

Starr then wired Tripp with a microphone and sent her to meet Lewinsky at a hotel in Virginia on Jan. 13. There Tripp coaxed Lewinsky to again talk about the alleged affair, this time with FBI agents recording her words only a few yards away.

The allegations of the affair came as another woman, Paula Jones, is suing Clinton for sexual misconduct when he was governor. Lawyers for Jones had subpoenaed both Lewinsky and Tripp to testify that Clinton had an affair with Lewinsky in order to buttress Jones’s charges. In responding, Lewinsky submitted an affidavit on Jan. 7 stating she had had no sexual relationship with Clinton. When questioned by Jones’s lawyers on Jan. 17, Clinton also denied under oath having had an affair with Lewinsky.

When meeting with Tripp on Jan. 13, Lewinsky fretted that she had lied in her Jan. 7 affidavit about her alleged romance with Clinton.

The secret tapes, if genuine, could become key evidence for prosecutor Starr to charge Clinton with perjury. Furthermore, Starr’s prosecutors and the media are investigating whether Clinton, through his friend and sometime legal advisor Vernon Jordan, encouraged Lewinsky to lie.

The whole soap opera, which has generated many smaller dramas involving other alleged lovers of Clinton when he was President and governor, has paralyzed Washington for the past week and prompted widespread speculation that Clinton may be impeached or forced to resign.

For his part, Clinton, at first evasively and later emphatically, denied any affair with Lewinsky. “I did not have sexual relations with that woman, Miss Lewinsky,” Clinton said on Jan. 26 standing next to his wife Hillary and pointing his finger at the TV cameras. “I never told anybody to lie, not a single time — never. These allegations are false.”

Hillary Clinton has been even more impassioned than her husband, particularly during a Jan. 28 interview on NBC’s “Today” morning show. “We get a politically motivated prosecutor [Kenneth Starr] who is allied with the right-wing opponents of my husband who has literally spent four years looking at every telephone call … we’ve made, every check we’ve ever written, scratching for dirt, intimidating witnesses, doing everything possible to try to make some accusation against my husband,” she said. “Bill and I have been accused of almost everything, including murder, by some of the same people who are behind these allegations,” Ms. Clinton continued, alluding to accusations of murder by some conservative quarters over the July 1993 suicide of White House aide Vince Foster, for whom Tripp had been a secretary.

“The great story here … is this vast right-wing conspiracy that has been conspiring against my husband since the day he announced for president,” Hillary said.

Indeed, the whole controversy is just another episode in the political rivalry between liberal Democrats and conservative Republicans, in which Haiti has often been embroiled. And although the allegations against Clinton appear convincing, especially since Lewinsky is bargaining with Starr for immunity from prosecution if she “tells all,” it is also possible that the whole Lewinsky story is fabricated.

Such suspicion grows when one learns more about a key player, Ms. Tripp. A holdover from the Bush days, Tripp reportedly disliked the Clinton administration politically. Furthermore, both before and after she was at the White house, she worked at the Pentagon where she had top secret clearance and handled secrets for the Delta Force and other elite secretive U.S. military commandos. “I’ve worked on the covert side of the Department of Defense,” Tripp said before a House committee investigating the Vince Foster suicide (New York Times, Jan. 26, 1998). Of course, the military is one of the most conservative sectors of the U.S. power structure and has made no secret of its contempt for Clinton.

Even more interesting is the cozy relationship between Tripp and Lucianne Goldberg, a New York literary agent, who coached Tripp in surreptitiously taping Lewinsky. Goldberg admits to having spied on Democratic candidate George McGovern for incumbent Republican President Richard Nixon in 1972. Goldberg traveled with McGovern by posing as a reporter for the North American Newspaper Alliance (NANA) and a subsidiary agency, the Women’s News Service (San Francisco Chronicle, Jan. 23, 1998). From 1957 to 1981, Goldberg’s husband, Sidney, worked in various capacities as editor, manager, and president at NANA, whose reporters and owners have often been cited as having numerous and close ties to the CIA (“The Conspiracy Shoe is on the Other Foot” by Daniel Brandt, New York Transfer News Service, Jan. 27, 1998).

But perhaps the most questionable actor is special prosecutor Kenneth Starr himself. Under the Bush administration, Starr was the Solicitor General, the U.S. government’s chief lawyer, who fought to repatriate Haitian refugees fleeing the 1991 coup d’état. Sparking a legal battle that raged for months, the U.S. government was prevented in November 1991 by a court order from sending Haitians back without giving them fair screening interviews.

Most disturbing are indications that Starr had no qualms about apparently manufacturing evidence to bolster his case. In January 1992, Starr petitioned the court to allow repatriations because 20,000 Haitians “were massed” on Haitian beaches and preparing to sail towards Guantanamo, which the Pentagon claimed could not accommodate such numbers. To support their claim, the U.S. government submitted a declaration from Robert K. Wolthuis, supposedly the Assistant Secretary of Defense. In fact, Wolthuis was only “Assistant Secretary of Defense” for one day: the day he signed the declaration. “Mr. Wolthuis readily admitted that most of the facts he swore to in his declaration were what the lawyers who had drafted it told him,” wrote Cheryl Little in her account of the case. Asked why Starr and the U.S. government would deputize Wolthuis in such a fashion, Little told Haïti Progrès: “My assumption is because they needed someone who was willing to lie, fabricate evidence, be manipulated, and sign a paper that somebody else drew up.”

“It seems what they did is just grab this guy and say ‘Hey, you are now the Acting Assistant Secretary of Defense, sign this document'” explained Ira Kurzban, a well-known lawyer for Haitian refugees, who, along with Little, was part of the team of lawyers defending the Haitians. “Kenneth Starr obtained or, at the very least, utilized an affidavit which he knew to be fraudulent. And when we pointed that out in documents, Starr continued to use it anyway.”

This story just goes to show to what depths of deceit Starr was prepared to go to win his case. This is not to absolve or defend Clinton, who may have done what is today alleged. But Starr’s investigation of Clinton’s financial and sexual life is clearly motivated by no higher legal or moral code. They are a result of the basest political wrestling.

Most ironic is that politically Clinton is barely distinguishable from his Republican “opponents.” He has become the most conservative of Democrats and has presided over five years of interventionist, neoliberal, anti-immigrant, anti-worker, pro-business government, including the dismantling of that most cherished of Democratic programs, welfare.

But there is a very real chance that the crisis may now bring down his administration, leaving vice-president Al Gore to finish the remaining 3 years of his second 4-year term. What would such a change mean to all the politicians in Haiti who have hitched their wagon to Clinton’s? Will Clinton’s doom entail their own? For the answer, stay tuned to the scandal. In a hemisphere dominated by U.S. media, you really have no choice.