Haiti’s Cup of Tears is Filled to the Brim 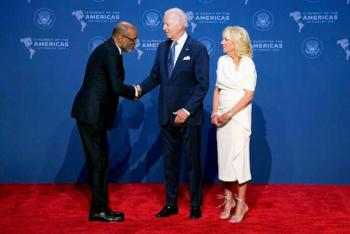 As Haiti in full political and social breakdown, Haiti’s de facto prime minister Ariel Henry spent thousands to travel to Los Angeles for the Summit of the Americas fiasco and to bow to President Biden, who put him into power.

After so many years of fear, lack of the imagination, and heinous crimes beyond human comprehension, the Haitian people have almost forgotten what it is to be proud of their country.

Instead, they feel abandoned, humiliated, and depressed by their impoverished nation, with its underpaid, overexploited workers and precarious peasantry. Haiti no longer knows how to attract tourists or produce food for export or even to feed itself. Its infrastructure and social services are practically non-existent. Even its hallowed, bustling public squares, once filled with flirting couples, studious youths, and debating crowds, have become nightmarish, like Port-au-Prince’s once-beautiful waterfront Bicentennial Park, now a no-go zone.

Haiti resembles a post-combat battleground, an immense field of ruins. Everyone is trying to save themselves. The poor masses are the first and principal victims. They feel that they have no future, and despite their armed uprising demanding rights and change last year, Haiti’s current political leaders show no signs of addressing their plight with seriousness, honesty, or competence. In short, the political class has nothing new to offer.

One has the impression that this page of our history is turning into chaos and anarchy. The politicians are dramatically incapable of performing even the simplest duties. These opportunists are more interested in their survival and class interests than in Haiti’s development, so they have become a major handicap for the nation’s future. They offer absolutely nothing to the working, starving masses.

This daily reality has become even more punishing for the population with inflation spiking to almost 27%, the highest in 19 years, on top of runaway corruption and the decomposition of the political system and state institutions. The assault on the capital’s Palace of Justice by Village de Dieu’s “Five Second Gang” last week (probably in collusion with certain mercenaries in the courthouse) shows how out-of-control things have become.

Only the political class benefits from this instability, as it continues to search for “political consensus” to distract from and hide the harsh reality.

Haiti’s imbroglio becomes more complicated every day. Insecurity is rife, and some political leaders are up to their necks in shady embezzlement. Groups like the PEN, headed by infamously corrupt politicians Youri Latortue, Joseph Lambert, and Arodon Bien-Aimé, organized mobilizations last week in Gonaïves and on Jun. 14 in Hinche. These largely-paid demonstrations are merely the hypocritical machinations of cynical politicians. But the Haitian people know it, and Latortue was chased from Hinche today by rock-throwing crowds.

But the bourgeois media and other politicians, even his rivals, don’t denounce these charades. In the same way, total silence greeted the recent declaration of lawyer Mr. Caleb Jean-Baptiste that “it was the Democratic and Popular Sector (SDP) which had hired him to defend one of its persecuted militants, namely Innocent Vitelhomme”, a known criminal and close ally of the 400 Mawozo gang. Why not a word about this kidnapping gang’s connection with the former opposition group, which now is a de facto ruling party?

Meanwhile, the SDP’s confederate and de facto Prime Minister, Ariel Henry, spends tens of thousands of dollars from the empty treasury to go bow and scrape at Joseph Biden’s so-called “Summit of the Americas,” which most people of Latin America and the Caribbean held in contempt because Washington had the arrogance to exclude Cuba, Nicaragua, and Venezuela. In response, the leaders of Bolivia, Mexico, El Salvador, Honduras, and Guatemala boycotted the fiasco. But Haiti’s U.S.-imposed fake leader attended.

Sadly, some self-declared “leftist” figures posture as radicals in the hopes of selling their image. Unfortunately for them, this posturing means nothing because their political choices align with the agenda of the bourgeois, reactionary and pro-imperialist right. That’s why we see groups like the MPDP as loyal followers of the Montana Accord’s reactionary leadership. This false left, which basically an NGOist, tries to deceive the youth and the popular forces into abandoning or diluting their demands, objectively braking the class struggle.

No political party is spared from this creeping decomposition. Ms. Helen La Lime, the long-time U.S. State Department official who heads the United Nations Integrated Office in Haiti (BINUH), went to see former President Jean-Bertrand Aristide for the first time last week. Afterwards, rumors circulated that she had offered him a “job” as… President of the Transition! Is this information or disinformation? Unfortunately, the rumor, which has set radios and social media buzzing, has been neither confirmed nor denied by Aristide or his Lavalas Family party. Shouldn’t he clearly communicate with the masses who put their faith in him, just as Fidel Castro and Hugo Chavez always did? Does this mean that the former President would be willing and available to play the role of firefighter for the imperialist powers in order to appease social anger, to prevent the impending social breakdown capable of giving birth to another country with another mentality and political project?

Nothing would surprise us in Haiti. Because the majority of Haiti’s politicians remain instruments at the service of the West. The women and men of the political class have only one ambition : to be the next to parade on the ruins of the National Palace.

This is what plagues the country under the yoke of a puppet oligarchy, parasitic and close to North American imperialism. Ours is a nation overwhelmed by unemployment, corruption, injustice, misery, violence, repression, that is to say in full political and social breakdown.

There is so much shame, bitterness, and anger within the working class just waiting for the opportunity to rise up. It is urgent that we break with this barbaric order and its political representatives so as to stop Haiti’s complete disintegration. The cup collecting the masses’ tears is now full to the brim.