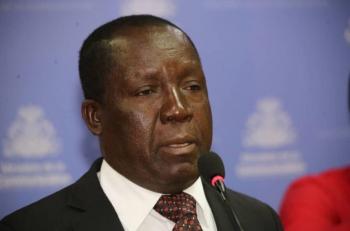 Haiti’s public works minister showed up at the offices of the government’s watchdog agency Wednesday. But it wasn’t an ordinary visit.

Joiséus Nader was accompanied by heavily armed men dressed in ski masks and black clothing. While they stood guard, civilians accompanying them snapped photos and took videos of some of the 300 employees and sensitive documents that are part of an ongoing corruption probe.

Now Nader is being accused of intimidation.

“When you come into an institution with a group of heavily armed men who have their faces covered and dressed in black, and whom we can’t even identify if they are police and they cross all of the perimeters to go into an area that is extremely sensitive where even some of the judges don’t go to, that is nothing more than an act of intimidation,” Rogavil Boisguéné, the president of the Superior Court of Auditors and Administrative Disputes, told the Miami Herald after Nader and his group left in unmarked vehicles. “It was a threat to prevent the court from doing its job.”

The Superior Court of Auditors and Administrative Disputes is the equivalent of the U.S. Government Accountability Office. It has been at the forefront of Haiti’s damning corruption investigation into how Haitian governments have spent $2 billion in Venezuela’s PetroCaribe petroleum-import finance project, especially after the country’s 2010 earthquake.

It has also been the target of attacks by Nader and President Jovenel Moïse who earlier this month told the Haitian public he wants to curb the court’s watchdog powers after judges refused to sign off on a draft of a no-bid contract between the Haitian government and General Electric.

More recently, a number of lawyers have cited the independent body as a possible recourse for a legal challenge against Moïse’s presidential decree creating a new Provisional Electoral Council that they say violates the country’s 1987 constitution.

Boisguéné said he was in his office when he was informed that Nader had showed up at the court, unannounced, and was at the gate. He told employees to let him in. When he didn’t see the minister, he went out into the hallway and that’s when he saw the minister and his entourage in an unauthorized area. While some employees were trying to get them to leave, others were trying to avoid having their pictures taken out of fear they would be made targets, Boisguéné said.

Hearing about Boisguéné’s difficulty over radio, a crowd including lawyers and human rights defenders gathered outside the building. Shouting Nader’s name, they chanted “tie them up,” “tie them up.”

Boisguéné, meanwhile, called a justice of the peace and Haitian Prime Minister Joseph Jouthe, who called the incident by his minister “regrettable.”

“We are doing our job within the limits of the law and we stand firm,” Boisguéné said. “We are not working to please neither X nor Y or any particular group. We are working for the Haitian population... because we are an organ of control.”

One of Haiti’s few independent institutions, specified under the constitution, the court recently fought back against attacks by Moïse and members of his government in a five-page letter.

During a Sept. 6 televised hearing, Moïse, who is ruling by decree, said he wanted to modify a 2005 executive order that specifies the court’s powers. The court’s control procedures, Moïse said, slow down the execution of government projects.

The court highlighted myriad irregularities in the General Electric contract and refused to sign off on it. The no-bid deal is to build a 55.5-megawatt diesel and natural gas power plant in the Port-au-Prince suburb of Carrefour.

Moïse said he had asked Jouthe to meet with the members of the court, but he also suggested that he was prepared to move on with his projects with or without the court’s green-light.

In that same televised “Community Dialogue,” Nader complained that the court had refused to approve most of his ministry’s infrastructure projects and proceeded to publicly bash the court, accusing its 10 judges of standing in the way of progress. He described them as “ignorant” and “incompetent.”

In an unusual move, the court broke its silence and responded to Nader’s and the president’s statements during the event. It deemed them slanderous and threatening, and said the contract was rejected for several reasons.

“How is the court responsible for the invalidity of this draft contract? Where are the blocking acts? Who blocks who or who blocks what? Precisely, one of the missions of the court is to prevent the involvement of the state in a non-existent act,” the court said.

The Miami Herald attempted to reach Nader, but he did not answer his phone or respond to a text seeking comment.

In a statement provided to the Herald hours after the story was published, Nader said he “strongly deplore, first of all, the story, contrary to the truth, which was transmitted to you and deliberately disguised by the president” of the court.

He said the General Electric contract was due at 11 a.m. Wednesday and he went to check on the files’ delivery. He denied doing anything “to provoke or create any stir” at the court.

“The space of 2 minutes was enough for me to see that all the contract files were in the hands of the person in charge of receiving it, and then to calmly leave the space,” Nader said. “Journalists, I know, only took pictures of the exterior of the building. The employees inside the office witnessed it and even showed their satisfaction to see me.”

A General Electric spokesperson told the Herald that the company remains ready to deploy for the project should the government decide to move forward.

“We are committed to integrity, compliance and the rule of law in every country in which we do business,” the spokesperson said.

In recent weeks, several individuals have sounded the alarm over Haiti’s climate of intimidation. Among them is Roman Catholic Monsignor Pierre-André Dumas who is currently based in the Nippes region of the country.

“A lot of pressure is being placed on bishops, priests, nuns... for them not to speak the truth, for them not to befriend the truth,” Dumas said during a widely shared Aug. 29 sermon. “It’s as if everyone would like for the Church to bathe in... lies.”

During the same sermon, Dumas said a government minister had called him to offer a deal: an appointment of a church official as Haiti’s ambassador to the Vatican in exchange for the Catholic Church appointing someone to sit on the new Provisional Electoral Council that was being created to organize elections.

“We are in an extremely difficult and painful situation where they don’t even understand the role of the church in the city,” Dumas said. “When a minister calls you to ask for such a thing, he does not understand the meaning of the truth. ”

Days later, another leading pastor and leader in the Protestant movement, Gérald Bataille, said he had been the object of threats since the Protestant Federation had led several protests against several articles in the new penal code published by presidential decree on July 26 and, like the Catholic Church, has refused to send a representative to sit on the new electoral council.

In response to the concerns raised by the religious leaders, a spokesperson for the U.S. State Department’s Bureau of Western Hemisphere Affairs told the Herald that the U.S. has regularly raised this issue both publicly and in private meetings.

“Civil society representatives’ ability to speak out without fear for their safety is key to Haitian democracy,” the spokesperson said. “Threats and impunity have no place in a democracy. We call on all stakeholders in Haiti to strengthen support for upholding the rule of law and human rights in Haiti.”

Boisguéné, who was reelected head of the court on Wednesday, said the panel can’t accept and won’t accept intimidation from anyone — not even a government minister. But he acknowledges that neither he nor any of his employees feel secure in Haiti, where many are still reeling from the Aug. 28 high-profile assassination of one of the country’s most respected lawyers and constitutional scholars, Monferrier Dorval.

“We have an institution that is doing its job, within the limits of the law. We are here to do our job without intimidation,” Boisguéné said.

While some lawyers may be looking to the court for help with Moïse’s presidential decree creating the electoral council, even more worrisome for some is the court’s role in the ongoing corruption probe involving the Venezuela oil program.

In three separate reports, the court has accused government ministers and individuals in the private sector of wasting hundreds of millions of dollars on projects that in some instances were never built. Not even Moïse has been spared from its probe.

He was accused in the first report of receiving millions of dollars for questionable road rehabilitation projects that the government auditors said were part of embezzlement schemes that defrauded the country’s poor out of billions of dollars in Venezuelan aid meant to improve their lives.

Moïse, who wasn’t president at the time his companies allegedly received the funds, has denied the allegations.