How do we support Haiti’s earthquake victims in both the short and long term? 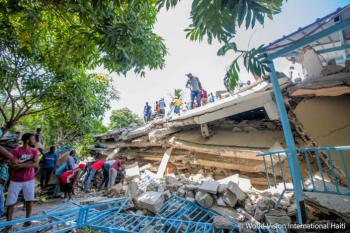 Haiti’s Aug. 14 earthquake has killed over 2,200 and injured over 12,000 Haitians. Triage is required, but many Haitians see this as a moment to build a new Haiti. Photo: World Vision

Haiti’s most recent earthquake has devastated most of the country’s three western departments of Nippes, the South, and the Grand’Anse. The epicenter was near Petit Trou de Nippes, which is completely leveled. Larger towns like Les Cayes and Jérémie have also seen major destruction. The death toll will continue to rise. So far, over 2,200 people have lost their lives to this quake, with more than 12,000 injured.

In 2010, the entire world watched in shock at the scenes coming out of Haiti, with major A-listers, charities, and organizations pitching in to “help out” the relief effort. Despite some $13 billion in assistance delivered, little tangible or lasting benefit accrued to Haitians. The Red Cross’ building of six houses with half a billion dollars of aid became emblematic of that pitiful disaster response.

This year’s earthquake registered a very brief blip on the mainstream media’s radar. Today, ten days after the quake, news apps and search engines have already downgraded Haiti, which was quickly displaced by news of the Taliban’s recent takeover in Afghanistan.

So the awareness and emotions needed to drive Haiti’s relief efforts are not easily sustained. Furthermore, many people are now leery of giving to Haiti due to the interception, misappropriation, waste, corruption, and incompetence which plagued the 2010 relief efforts.

So for those of us who know Haiti and want to help, what can we do? Where do we send money and supplies, and how?

The first lesson of 2010 is to give to reliable, in need, and on-the-ground relief efforts and networks rather than large Non-Governmental Organisations (NGOs) which have high overhead costs, cumbersome bureaucracies, and often skewed priorities out of touch with those of local people.

IT IS BEST TO DONATE TO THE ORGANIZED REGIONAL FRIENDS AND FAMILY DIASPORA GROUPS WHICH ARE RECOGNIZED AND TRUSTWORTHY.

Therefore, it is best to donate to Haitians independently, that is to the organized regional friends and family diaspora groups which are recognized and trustworthy. I gave to the United Haitians in the United Kingdom. Their Just-Giving page is seeking to raise $20,000 to send to Haitian communities affected by the quake.

In the U.S., there are other established Haitian community groups like Miami’s Family Action Network Movement (FANM), which is providing earthquake relief or can direct you to other accountable groups.

There are also some medical NGOs which have proven their worth over time. Foremost among them is Partners in Health, which works closely with Cuba’s medical brigade in Haiti. The PIH and Cuban doctors were rapid and tireless responders in both 2010 and 2021.

Beyond the current triage required, many Haitians see this moment as one which can spur efforts to build a new Haiti which is more prepared for the earthquakes and hurricanes which regularly strike it. This means providing support for the organizations dedicated to systemic political change.

The Institute for Justice and Democracy in Haiti (IJDH) and its affiliate, the International Lawyers Office (BAI), as well as the Office for Human Rights Defense Organizations (BODDH) are all organizations which work to defend not just human rights in Haiti but support groups working for progressive social change. The newspaper Haïti Liberté is also a Haitian institution based in Haiti and New York which is dedicated to promoting a new political and economic system in Haiti. All these organizations have links to progressive political parties and popular organizations which are driving the campaigns for a new Haiti.

Haiti’s Prime Minister Dr. Ariel Henry is trying to channel the earthquake relief support through the Haitian government (which only received a tiny fraction of the 2010 relief funds). After 2016’s Hurricane Matthew hit Haiti’s southern peninsula, the interim government of President Jocelerme Privert tried to do the same thing. But it will take more than declarations of intent to change the way disasters are managed in Haiti. There are questions of capacity, credibility, and trust which bedevil current government efforts to take charge.

Perhaps, most importantly, Washington should not use this moment to invade Haiti under the pretext of providing earthquake support. As Haiti Liberté reported this past week, already the U.S. has deployed some 620 troops to Haiti as well as warships, helicopters, and drones.

“Haiti Liberté rigorously denounces this umpteenth Yankee landing under humanitarian pretext to defile once again the Haitian soil of Dessalines, Péralte, and Batraville,” Thomas Péralte wrote. “The Haitian people must remain vigilant and mobilized, because, if our country is faced with tragedy following earthquakes and storms due to our weak governments, it is because the United States has always imposed local lackeys on us who not only destabilize the country but also safeguard and defend Washington’s hegemonic interests.”

Let us give to Haitian diaspora relief networks for this latest earthquake’s victims but also support grassroots Haitian political efforts to build, as they say in kreyòl, a “Ayiti ki granmoun tèt li,” a Haiti which is its own master.